Facebook says it’s on a mission to de-bloat its Messenger app this year. At the same time, TechCrunch has discovered, the data-mining giant is running tests on its desktop platform to inject the Messenger “contact pages” of businesses directly into your chat sidebar.

And here it appears to be toying with the idea of spamming Facebookers with businesses they’ve neither used nor expressed any personal interest in using… So, er, so much for trimming its own fat then.

I know because earlier this month I found myself in one of these tests buckets, after I noticed some new “contact pages” icons appearing at the top of the Facebook chat sidebar…

To be clear, the sidebar is the messaging shortcut area at the right hand side of the Facebook News Feed (when you visit Facebook on the desktop). It usually contains a list of your friends so you can easily locate them to open up a chat.

But, this month, while I was in Facebook’s test bucket, I was seeing businesses’ contact pages appearing here too — above the ‘chat head’ icons of friends. So basically in the most prominent spot possible on the page.

At first glance only one of the three icons was familiar as a business I knew by sight (and had used). A second icon turned out to an online business of a Facebook friend of mine which I was also aware of (and had visited to test out).

The third was the Facebook page of a Methodist church. I had never come across this church before in my life… 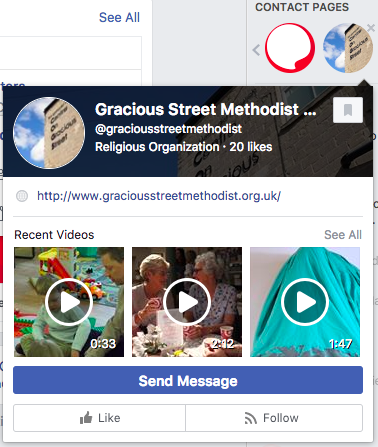 What to make of this bizarre spiritual incursion by Facebook?!

I’m really not sure that ‘religion’ is the kind of ‘business’ anyone might feel urged to contact just because they happen to have a Facebook friend who’s into that kind of thing. But here was Facebook testing exactly that possibility — offering me a suggestive messaging hotlink to, er, God.

While methodists might welcome Facebook’s Damascene conversion to (at least in this example) evangelizing their particular brand of Christianity, it doesn’t take much imagination to envisage the kind of ‘businesses’ Kremlin agents might seek to seed across Facebook to take advantage of algorithmic recommendations for “contact pages” and win prominent placing in users’ sidebars.

Returning to the test, there didn’t seem to be an obvious option to edit the contact pages. The only visible options were left and right arrows to scroll through some other (also unfamiliar) business pages. (Though later I noticed if you hover over each icon, which then pops up a glut more info about it — including a big button to message the page owner, a tiny grey cross also momentarily materializes next to the original icon, which presumably lets you edit it out of the selection.)

While I couldn’t (initially) see a way to delete the church — or indeed either of the other two businesses (which I also didn’t feel I would ever need to message via the Facebook homepage) — there was a (very visible) option to click to ‘see all’.

This opened a full spread of business contact pages (below) — which provided a hint at Facebook’s logic for surfacing those first three icons in the sidebar. Here it told me (in pale grey letters) that particular Facebook friends of mine had either liked each individual business or been geolocated as using it (via a Facebook ‘check in’).

In the church’s case its page had been liked by one of my Facebook friends. Hence, presumably, Facebook thinking I’d also like to chat to it. (Which seems more like an ‘artificial dumb idea’ than artificial intelligence to my eye.)

I can’t read a great deal of sense into why Facebook had settled on these particular friends to power these particular business suggestions either. They seem to be friends I have chatted with at least once via Facebook (though not necessarily that recently; but then I also don’t use Facebook for much messaging).

And/or friends that I had been geolocated with together at the same business by Facebook — at least in one instance (again not recently, and I know for a fact the friend has also only been to the business in question once). So shared location appears to be being very heavily weighted in Facebook’s business recommendation engine. 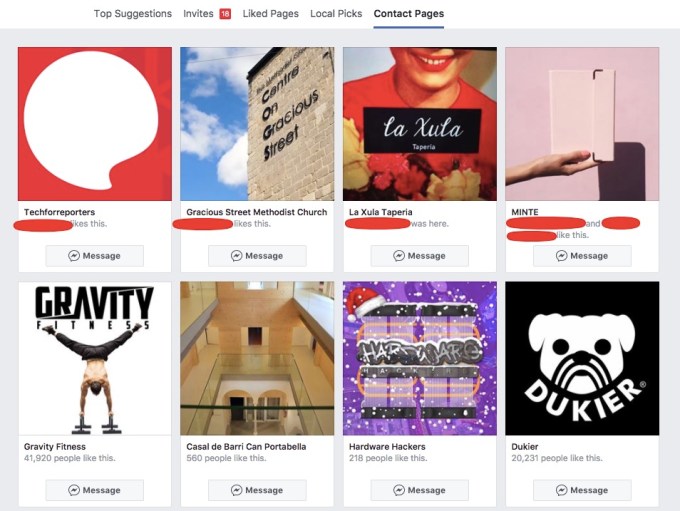 The rest of the contact pages (the second tier) were businesses that other users of Facebook had liked. None were businesses I had ever used (nor were familiar with). But there are ~2BN Facebook users these days which means there are, inevitably, billions and billions of ‘liked’ business pages on Facebook. Any of which, presumably, could be served into your sidebar by Facebook’s algorithms in future (assuming this test gets the go ahead).

These non-friend based suggestions appear to factor in where Facebook thinks you’re located. Beyond that, I’d guess they’re generally tailored to what Facebook thinks you’ll find interesting and relevant — based on the continuous data-mining the company performs of every user (and at least some non users) for its ad-targeting purposes.

Its assessment of my interests here — fitness, community projects, technology and pets — was certainly less ‘out there’ than nudging me towards a Methodist church. Or pointing me at a random fashion brand that a couple of guys I happen to know had apparently once liked (another of the friend-powered suggestions it had curated for me).

Though the actual businesses being suggested were still no less irrelevant in this context — i.e. in a personalized index with Facebook’s suggestive call to action being that I leap right in and start chatting.

Being quasi-relevant yet also useless made these suggestions feel even more creepy — highlighting the unstated fact of their being powered by intelligence Facebook had gleaned via background surveillance.

Would I ever decide to A) browse an index of businesses Facebook believes I would like and B) have the urge to ‘cold-call’ any of them via a Fb message? In a word, no.

If I’m looking for a particular type of business then I’ll do it under my own steam. I would certainly never think ‘I’ll go and see if Facebook has a suggestion’. That might be how algorithms ‘think’; but it’s not how I do.

I contacted Facebook to ask about what I was seeing and its intentions regarding the chat sidebar and businesses’ contact pages. And I was told multiples times, by multiple Facebook employees, that they were looking into it.

Meanwhile I had a look around online — and found several other Facebook users apparently stuck in similar test buckets (in a few different geographical locations, dating back at least as far back as November) — also complaining that the intrusion into their sidebar felt creepy and irrelevant…

And what has my Facebook Ticker now been replaced with? The option to 'Contact Pages'. None of those three pages is one I've liked, so I suppose if it's just if I'm in the mood to contact dog breeders or a bar in another state? pic.twitter.com/IhoitHCLLL

@facebook I don't want contact pages, I want you to restore the old situation, where I can see who of my contacts liked pages or commented so many minutes ago. W/o that you are close to finished for me.

Dear @facebook: Your "contact pages" on the right side of my screen is ill-thought of and just plain creepy. While I share my some of life online, don't pry deeper. Please stop being an eerie stalker.

It’s been a week since I started asking Facebook about this, and I am still waiting for it to explain why its algorithms were nudging me to chat with a church.

While the company has not answered any questions nor even provided a general explanation of what’s going on, one of its comms spokespeople suggested the query might need to go to the Messenger team. (Albeit, when I contacted a member of the Messenger comms team they just rerouted my request back to Fb’s main press email saying they couldn’t help. So [shrug emoji].)

One development: I do appear to have been removed from the test bucket. So — for now at least — the chat sidebar has been returned to its pre-test state of being just a list of friends, not a filofax of irrelevant businesses thrust in my eyeline.

But it remains to be seen whether Facebook decides to roll it out in future. It does continuously run tests on its products. And many of these tweaks never end up getting actually baked in to the software.

But given that business messaging is a growing area of focus for the company — just last week it launched a business app for its WhatsApp messaging product, for example — and given its freshly stated desire to remove some of the non-personal ‘noise’ from News Feed, it at least seems unlikely it will abandon trying to find a more prominent placement for businesses’ contact pages on its desktop product.

It could be that now Facebook has decided the News Feed must include less content from the world outside your friend circle (aka your filter bubble), then it’s time for the chat sidebar to get a bit less personal (aka more spammy) — and that’s why it’s testing having it double up as a place where it can actively push users to chat with businesses as well as friends.

Having been in its test bucket, and having found myself spammed with some very random business contact details, I’d urge the company to think twice before it switches on yet another lead-footed algorithmic evangelizer — and risks wading into fresh controversies at a time when its platform is already bogged down on that front.

Alternatively, I’m left to wonder whether there was some kind of underlying spiritual coda being delivered when CEO Mark Zuckerberg talked about wanting Facebook to encourage “meaningful social interactions” and lead to more ‘time well spent’. What were you really trying to tell us, Mark? And what are you really trying to sell us?

Update: A Facebook spokesperson finally responded to say the goal of the test “is to help connect people with the businesses they care about on Facebook by offering suggestions to people for Pages they might want to message” — adding: “This is a Pages messaging test, not a Messenger product test or feature.”

She also clarified there is in fact an off switch for the test: “If you’d like to stop seeing these suggestions, you can opt out of this test by going to the bottom settings menu [on the chat sidebar] and clicking “Turn off Pages to Contact”.”