Back in 2010, Apple’s iconic co-founder Steve Jobs was not entirely enthralled with the enterprise. In fact, Jobs is famously quoted as saying, “What I love about the consumer market, that I always hated about the enterprise market, is that we come up with a product, we try to tell everybody about it, and every person votes for themselves.”

That was an accurate enough representation of the way things worked when Jobs made the statement. Back in those days, IT kept tight control over the enterprise, issuing equipment like BlackBerries and ThinkPads (and you could have any color you wanted — as long as it was black). Jobs, who passed away in 2011, didn’t live long enough to see the “Bring Your Own Device” (BYOD) and “Consumerization of IT,” two trends that were just hovering on the corporate horizon at the time of his death.

I have the feeling he would have quite liked both movements and would have taken great pleasure in the fact that in many ways those trends were driven by his company’s mobile devices, the iPhone and the iPad. People were using those devices at home and they were increasingly bringing them to work. IT had little choice but to begin accommodating them.

That movement has helped fuel Apple’s enterprise evolution. Over time, Apple has partnered with enterprise stalwarts like IBM, SAP and Cisco. It has provided tools for IT to better manage those i-devices, and Macs, too, and it has built the enterprise into a substantial business (to the extent that we can tell).

What do we have here?

Trying to find data on the size of Apple’s enterprise business is a challenge because it doesn’t often break out enterprise revenue in earnings calls, but to give you a sense of the market, Tim Cook did reveal a number in the Q4 2015 earnings call.

“We estimate that enterprise markets accounted for about $25 billion in annual Apple revenue in the last 12 months, up 40 percent over the prior year and they represent a major growth vector for the future,” Cook said at the time.

In a June 2017 Bloomberg interview, Cook didn’t provide any numbers, but he did call the enterprise, “the mother of all opportunities.” That’s because enterprises tend to buy in bulk, and as they build an Apple support system in-house, it feeds other parts of the enterprise market as companies buy Macs to build custom apps for both internal users and consumers of their products and services.

This connection did not escape Cook in the Bloomberg interview. “For most enterprises, iOS is the preferred mobile operating system. IOS is a fantastic platform because of the ease with which you can write apps that are great for helping you run your business efficiently or interface with your customers directly. We see many, many enterprises now writing apps. Well, what do they use to write the apps? They use the Mac. The Mac is the development platform for iOS,” Cook told Bloomberg. 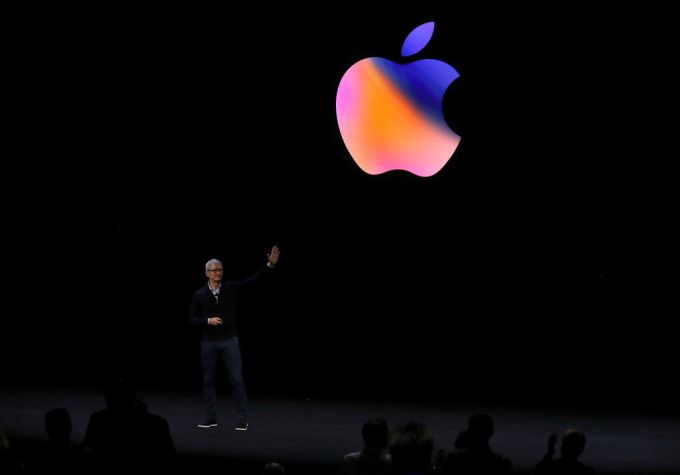 Another way to look at the market is to look at Jamf, an Apple enterprise tool partner that helps companies manage Apple devices in large organizations. The company, which launched in 2002 long before the iPad or the iPhone, has been growing in leaps and bounds. It reports it has 13,000 customers today. To put that into perspective, it took 13 years to reach 6,000 customers and just 2.5 years to more than double to 13,000.

“A lot of people say Apple is getting more focused on enterprise, but I believe Apple helped enterprise focus more on users and they’ve had more success,” Jamf CEO Dean Hager told TechCrunch. “It started with Apple creating great products people wanted to bring to work and then they just demanded it,” he said.

Forcing their way into the enterprise

That organic momentum can’t be underestimated, but once it got in, Apple had to give IT something to work with. IT has always seen its role as hardware and software gatekeeper, keeping the enterprise safe from external security threats.

Ultimately the company never set out to build out enterprise-grade devices with the iPhone and iPad. They simply wanted devices that worked better than what was out there at the time. That people liked to use them so much that they brought them to work was an extension of that goal.

In fact, Susan Prescott, vice president of markets, apps and services at Apple was at the company when the first iPhone was released, and she was aware of the company’s goals. “With iPhone, we set out to completely rethink mobile, to enable the things we knew that people wanted to do, including at work,” she said. 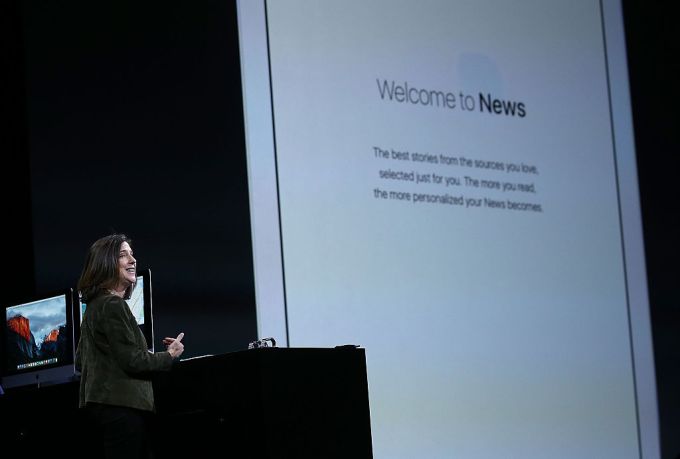 The notion of apps and the App Store and bringing in developers of all ilks to build them was also attractive to enterprises. When IBM and SAP got involved, they began building apps specifically geared towards enterprise customers. Customers could access these apps from a vetted App Store, which also was appealing to IT. The Cisco deal gave IT faster on-boarding of Apple devices on networks running Cisco equipment (which most enterprises use).

At the 2010 iPhone 4 keynote, Jobs was already touting the kinds of features that would appeal to enterprise IT, including mobile device management, wireless app distribution through the App Store and even support for Microsoft Exchange Server, the popular corporate email solution of choice at the time.

He may have spoken derisively about the enterprise in a general sense, but he clearly saw the potential of his company’s devices to transform the way people worked by giving them access to tools and technologies that previously were not in reach of the average worker.

Apple also was quietly talking to enterprises behind the scenes and figuring out what they needed from the earliest days of the iPhone. “Early on we engaged with businesses and IT to understand their needs, and have added enterprise features with every major software release,” Prescott told TechCrunch.

One of the factors driving the change inside organizations was that mobile and cloud were coming together in that 2011 time frame, driving business transformation and empowering workers. If IT wouldn’t give employees the tools they wanted, the App Store and similar constructs gave them the power to do it themselves. That fueled the BYOD and Consumerization of IT movements, but at some point IT still required some semblance of control, even if that didn’t involve the same level they once had.

The iPhone and other mobile devices began to create the mobile worker, who worked outside the protection of the firewall. People could suddenly look at their documents while waiting for the train. They could update the CRM tool in-between clients. They could call a car to get to the airport. All of this was made possible by the mobile-cloud connection.

It was also causing a profound change inside every business. You simply couldn’t do business the same way anymore. You had to produce quality mobile apps and you had to get them in front of your customers. It was changing the way companies do business.

It was certainly something that Capital One saw. They realized they couldn’t remain a “stodgy bank” anymore, and control every aspect of the computing stack. If they wanted to draw talent, they had to open up, and that meant allowing developers to work on the tools they wanted to. According to Scott Totman, head of Mobile, Web, eCommerce, and personal assistants at Capital One, that meant enabling users to use Apple devices for work, whether their own or those issued by the company. 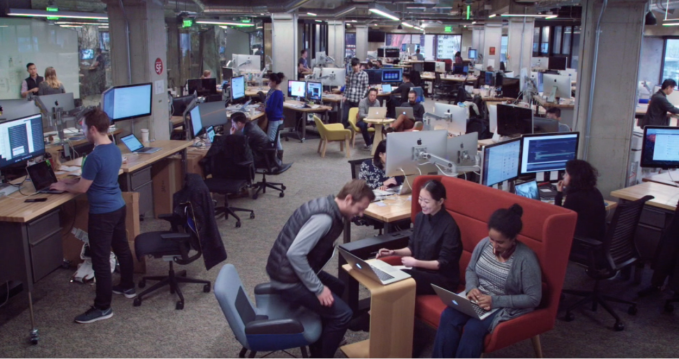 “When I came in [five years ago], the Apple support group was a guy named Travis. We weren’t using Apple [extensively] in the enterprise, [back then],” he says. Today, they have dozens of people supporting more than 40,000 devices.

It wasn’t just people inside the company whose needs were changing. Consumer expectations were changing, too, and the customer-facing mobile tools the company created had to meet those expectations. That meant attracting those app developers to the enterprise and giving them an environment where they felt comfortable working. Clearly, Capital One has succeeded in that regard, and they have found ways to accommodate and support that level of Apple product usage throughout the organization.

Getting by with a little help

Capital One wasn’t an outlier by any means, but if Apple was, at its core, still a consumer company, it was going to need help to capture the enterprise market and understand the needs of a large organization. That’s why it made a series of moves over the last several years to partner with enterprise bedrock companies, forging agreements with IBM, SAP and Cisco, with professional services giants like Accenture and Deloitte and, most recently, GE. That latter gives the company a foothold in the industrial Internet of Things market. Meanwhile, GE has committed to standardizing on the iPhone and iPad for its 300,000+ employees, while also making the Mac an official computer offering.

Patrick Moorhead, president and principal analyst at Moor Insights & Strategy, sees partnering as a sound approach for Apple. “Apple knows it’s a consumer company and therefore needs to partner with pure enterprise players to execute its enterprise strategy. Each company adds a different element to the strategy. IBM and SAP are mobile app plays. Cisco is about accelerated networking and edge security. GE is all about IoT software,” Moorhead explained.

Jack Gold, president and principal analyst at J Gold Associates says, these companies provide a primary entrée into the enterprise for Apple. “They aren’t really a component supplier as much as a solutions provider, and without the partnerships, it would be much harder for them to have an impact. The leveraging of partnerships allows them to compete at the full solutions level rather than have to compete on a component basis,” Gold said.

The IT jury is still out

While Apple spent the last decade building up that enterprise business, and the internal and external support components, the partnerships they have built along the way didn’t just give them enterprise street cred, they also often provided a level of coverage that would have been more difficult to provide on their own.

“IT is very accustomed to having a good deal of support as an ability to work directly with major suppliers. In Apple’s case, the really big companies can do so, but many have to go through an intermediary. That’s not necessarily bad, but it is a way for Apple to leverage its more limited enterprise resources,” Gold said.

Ray Wang, founder and principal analyst at Constellation Research, sees some challenges for Apple enterprise customers. ”Their challenge with Apple is that companies such as Dell have made it so easy to take care of their devices that Apple would have to replicate that level of service. Being told to go to a Genius Bar isn’t the right answer for most IT shops,” he said.

To be fair, Apple does have enterprise-level AppleCare support, which happens to be run by partner IBM. Prescott says that Apple is working with larger customers to give them what they need. “We work directly with customers to help them integrate and manage Apple devices. We offer technical support through AppleCare, and our Apple at Work website offers IT resources and guides. We strategically partner with world class companies to complement our enterprise efforts and help customers get started, all the way to rethinking business processes with mobile at the core,” she explained.

It’s worth noting that a survey conducted by Jamf in 2016 found a strong preference of 79 percent for iPhones among respondents when it came to mobile phones. 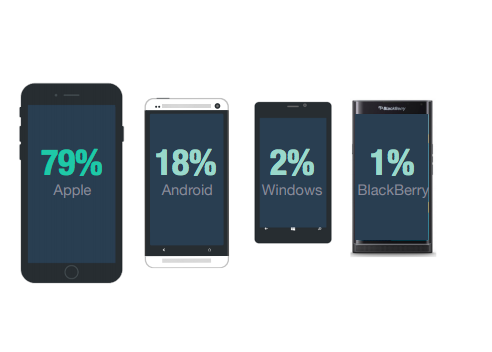 The survey included 480 executives, managers and IT professionals from small, medium and large organizations from around the world. The numbers suggest that IT has little choice but to support iPhones and other Apple products, and Apple has been finding ways to help them.