WhatsApp today officially launched its new WhatsApp Business app in select markets, including Indonesia, Italy, Mexico, the U.K. and the U.S., ahead of its planned worldwide rollout. The addition of business profiles and new messaging tools aimed at business customers is part of the company’s broader plan to generate revenue by charging larger enterprises for advanced tools to communicate with customers on the platform now used by over a billion people worldwide.

The WhatsApp Business app is the initial entry point in this market.

Aimed at smaller businesses, the free app – Android-only for now – helps companies better connect with their customers and establish an official presence on WhatsApp’s service. Essentially, it’s the WhatsApp version of a Facebook Page.

The company had previously announced the app’s arrival, and begun verifying business accounts as part of its WhatsApp Business pilot program back in September 2017. Verified accounts were given a green checkmark as a means of demonstrating their authenticity.

WhatsApp says people will know when they’re talking to a business because these accounts will be listed as “Business Accounts.” Over time, some of these will become “Confirmed Accounts,” after WhatsApp verifies the account phone number it registered with matches the business phone number.

Once established on the WhatsApp network, businesses can then use a series of tools provided by the app, like smart messaging tools that offer similar technology as what you’d find today in Facebook Messenger. 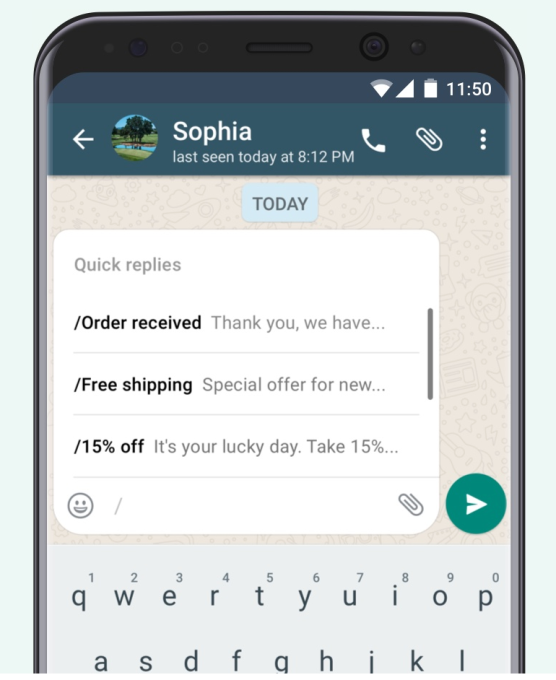 For example, the app offers “quick replies” that provide fast answers to customers’ frequently asked questions; “greeting messages” that introduce customers to the business; and “away messages,” that let customers know you’re busy.

Businesses will also be able to access messaging statistics, like number of messages read, and they can send and receive messages from the desktop via WhatsApp Web.

While businesses will need to use this new app to communicate with customers, for the general WhatsApp user, there’s no change. They’ll be able to message businesses but can control their experience by blocking numbers and businesses, as well as report spam.

In addition, businesses will only be able to contact people who provided their phone number and agreed to receive messages from the business, the company had previously said.

The Business app will later be joined by an enterprise solution aimed at large businesses with a global customer base – like airlines, e-commerce sites, and banks, WhatsApp had said last fall. It didn’t announce any news regarding this solution today, but in the past the company said it would charge for these enterprise tools. Presumably, they’ll be built on top of the current WhatsApp Business core product.

The company also indicated today how critical it is to address the needs of businesses on its service, which now reaches 1.3 billion users. According to data it cited from Morning Consult’s research, over 80 percent of small businesses in India and Brazil said that WhatsApp helps them communicate with customers and grow their businesses.

WhatsApp declined to say how many businesses are today active on its app, when asked.

At launch, the WhatsApp Business is available as a free download on Google Play in supported markets. WhatsApp didn’t offer an ETA on when the Business app would rollout to worldwide markets beyond “the coming weeks,” or when an iOS version would arrive.

However, the company did confirm to us that – while it prioritized Android after researching with businesses where WhatsApp is used prominently – it does plan to support other platforms in the future.