Facebook CEO Mark Zuckerberg wants you to call your congressperson to act on DACA (Deferred Action for Childhood Arrivals). Since 2012, 800,000 undocumented immigrants have received DACA status.

“Every day that Congress doesn’t act more DACA recipients are losing their status,” Zuckerberg wrote in a Facebook post this morning.

If President Donald Trump has his way, DACA will end. Yesterday, the Department of Justice said it would ask the Supreme Court to review a federal judge’s ruling that ordered the government to keep DACA protections and restart the program.

“This is a basic question of whether our government works,” Zuckerberg wrote. :Can Congress come together and find a path forward, or will we default to forcing almost one million people out of their jobs and country?” 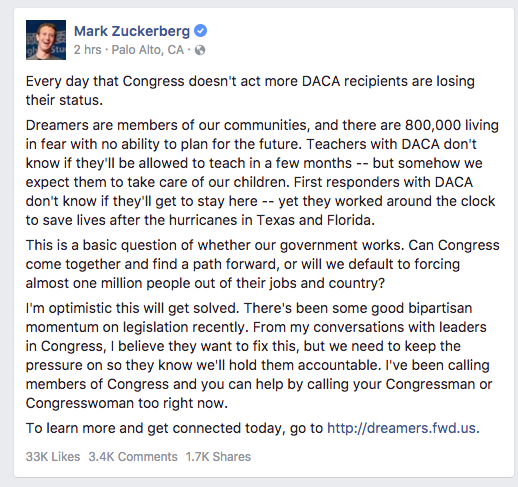 Zuckerberg isn’t the only Facebook executive speaking out in support of DACA. Facebook COO Sheryl Sandberg also posted about DACA this morning, saying “immigrants helped build this country — and continue to build it every day.” 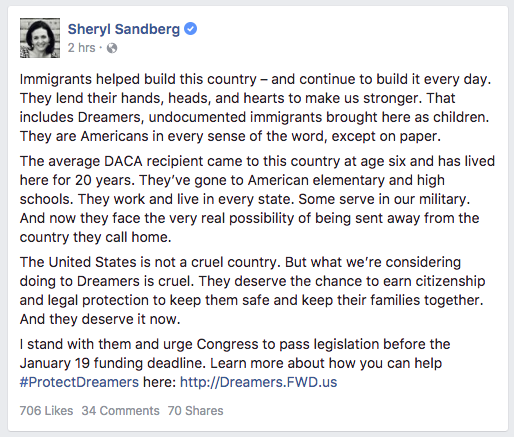 Earlier this week, Amazon CEO Jeff Bezos and his wife MacKenzie donated $33 million to TheDream.US, a scholarship fund for Dreamers.