Two more dead commenters have been spotted commenting on the FCC’s foregone net neutrality vote, a small but not insignificant discovery considering that, while public outcry for net neutrality was high, FCC representatives dismissed most of supportive net neutrality commentary as spam.

While searching a database created by the New York State Attorney General Eric Schneiderman, a designer named Morgan Knutson was outraged to find comments by his his liberal mother, Dana Barancik,, and grandfather, Frank Barancik. Dana died in 2014 and Frank died in 2015. Both were seemingly vehemently opposed to net neutrality last August.

“Before leaving office, the Obama Administration rammed through a massive scheme that gave the federal government broad regulatory control over the internet,” wrote the individual who used Mrs. Brancik’s name and address. “That misguided policy decision is threatening innovation and hurting broadband investment in one of the largest and most important sectors of the U.S. economy. I support the Federal Communications Commission’s decision to roll back Title II and allow for free market principles to guide our digital economy.”

This same quote appeared in countless fake and fraudulent comments.

Saw this tweet and looked up my mom. https://t.co/9geZVNxKwN

Hey, @AjitPaiFCC, how does my radically liberal activist mother, who passed away 4 years ago, post an anti-net neutrality comment to the FCC in August 2017??

YOU. MASSIVE. PIECE. OF. SHIT. pic.twitter.com/IYkjh9O0mE

AND MY GRANDFATHER WHO PASSED A YEAR AFTER WTF YOU SCUM @AjitPaiFCC pic.twitter.com/crGpDWuv9o

Schneiderman said that the commentary “[had] been corrupted by the fraudulent use of Americans’ identities — and the FCC has been unwilling to assist my office in our efforts to investigate this unlawful activity.” 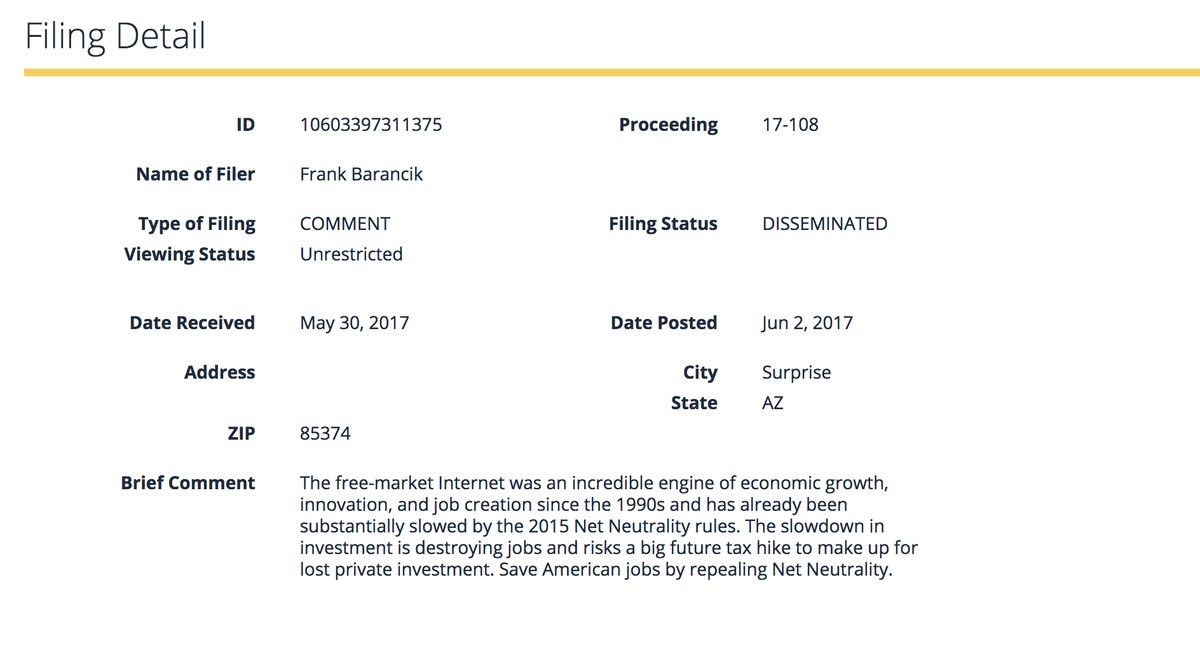 “Specifically, for six months my office has been investigating who perpetrated a massive scheme to corrupt the FCC’s notice and comment process through the misuse of enormous numbers of real New Yorkers’ and other Americans’ identities. Such conduct likely violates state law—yet the FCC has refused multiple requests for crucial evidence in its sole possession that is vital to permit that law enforcement investigation to proceed,” said Schneiderman. 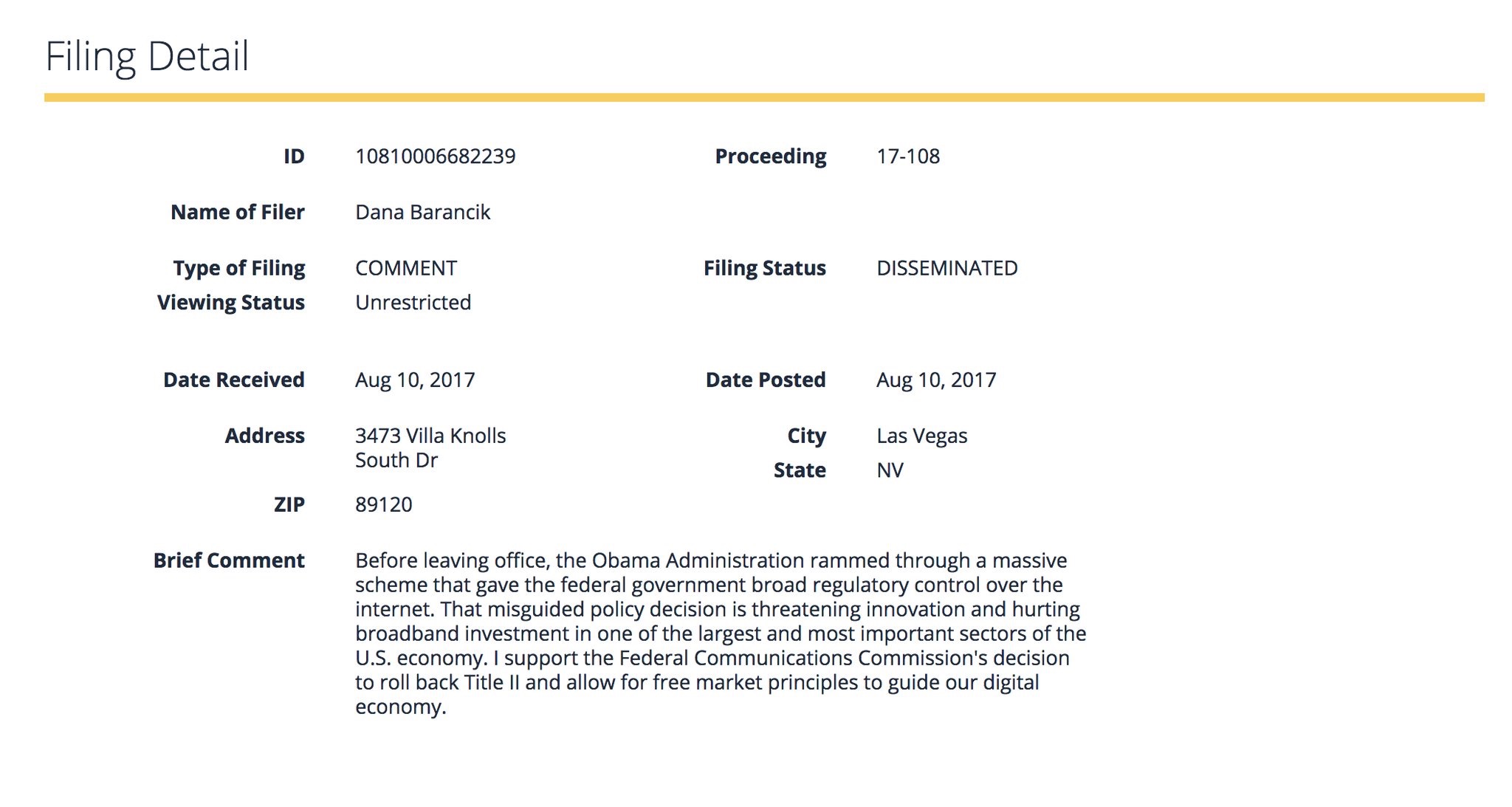 What does this show us? First, that it is trivial to completely spam important databases with accurate-sounding information. A quick Google search brought up Mrs. Baranic’s name and address, and an intrepid list-maker could gather thousands or even millions of addresses for the living or the deceased in a few hours. That anyone with a keyboard and a little time could sway – and ruin – public commentary on a massively important political issue is frightening.

What are next steps? As the FCC has noted, unvetted commentary has lost all of its weight online. Therefore the only answer is cryptographically secure identities tied to our person. Until this happens, expect the dead to vote and the unsuspecting to come out in favor of unfavorable opinions, at least when it comes to basic web forms on the FCC.

“I encourage the FCC to reconsider its refusal to assist in my office’s law enforcement investigation to identify and hold accountable those who illegally misused so many New Yorkers’ identities to corrupt the public comment process,” said Schneiderman. “In an era where foreign governments have indisputably tried to use the internet and social media to influence our elections, federal and state governments should be working together to ensure that malevolent actors cannot subvert our administrative agencies’ decision-making processes.”