Streaming radio and music service Pandora is today introducing a new way for people to access on-demand music, without having to upgrade to a Premium subscription. For the first time, radio listeners and those on Pandora’s mid-tier offering, Pandora Plus, will be given the option to watch a video ad in order to unlock an on-demand listening session.

The company explains in its announcement this feature will now appear when users search for a specific song, album or playlist in the app. They’ll then be shown the option to watch a 15-second video advertisement to unlock a complimentary on-demand session. (The ads themselves may actually be 30 seconds in length, depending on the advertiser, but users can skip the rest and unlock the session after 15 seconds).

Launched earlier this year, Pandora Premium is the music service’s answer to Spotify and Apple Music. The $9.99 per month service gives Pandora users the ability to search and play any track and create their own playlists.

The addition of the paid tier allowed Pandora to grow its in-app subscription revenues this year – it even booted Netflix from the top grossing spot on the App Store in Q3. The company also reported an increase in paid subscribers in the third quarter, growing from 4.01 million in Q3 2016 to 5.19 million in Q3 2017.

However, the majority of Pandora’s revenue still comes from its ad business – in Q3, $275.7 million of Pandora’s $378.6 million in revenue was ad-related, for example. Most of Pandora’s users are ad-supported as well. The company reported 73.7 million active listeners in the third quarter, down from 77.9 million in the same time a year ago; meanwhile total subscribers grew to 5.19 million.

That’s why it makes sense for the company to double down on advertising as a way to convert users to Premium listeners – or, at least, generate additional ad revenue by tapping into users’ interest in listening on-demand.

“Our ad-supported listeners’ top request has consistently been the ability to directly play the specific songs, albums, or playlists they want,” said Roger Lynch, Pandora President and CEO, in a statement. “These new features address that need by marrying rewards-based advertising with the best-in-class on-demand experience we’ve created with Pandora Premium. This unrivaled experience will drive listeners to Pandora and drive awareness for Premium, while also creating new opportunities for artists, labels, publishers and advertisers.”

Pandora tells us the free session can be also by triggered by coming to the app from an outside link, in addition to searching for content and getting the prompt to watch to unlock on-demand streaming. 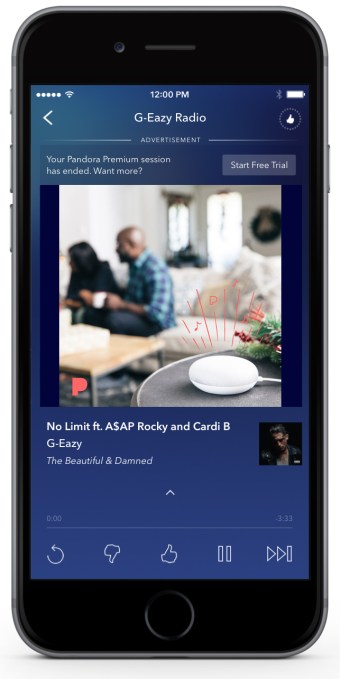 This option to start a stream via an outside link is a feature designed with artists in mind, Pandora says.

“The ability for our ad-supported users to search and play songs in our Premium product is game-changing not only for listeners, but also for artists and advertisers,” noted Pandora’s Chief Product Officer, Chris Phillips. “For artists, it creates new avenues of promotion by providing fans with direct links to play their music. For advertisers, it offers new ways for brands to build trust and create value for their audience.” 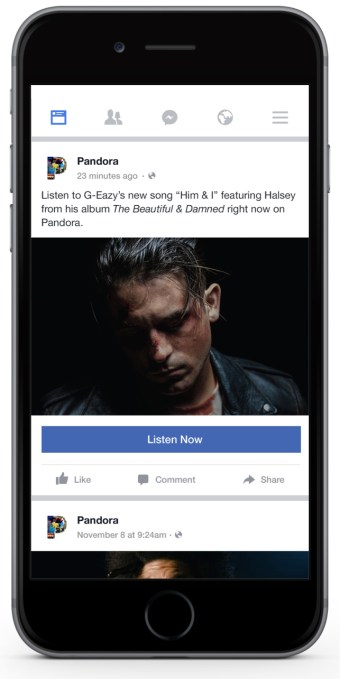 The streaming session, which includes support for background listening unlike some rivals, also offers users access to other Pandora features, like its personalized auto-play option that will take over your stream with unique recommendations powered by Pandora’s Music Genome Project. Users can also create their own playlists while in their free session, and these can be listened to next time they return.

We asked Pandora how it defined a session, and were told it will “last longer than just a song or two.” We understand that Pandora is actually still testing session length right now, and while the sessions may end up being longer, they’re not likely to be shorter than a few – like 3 or 4 – songs. At launch, Pandora will test session lengths of 15 minutes, 30 minutes and 60 minutes.

When the session ends, users can immediately opt to watch another video to continue.

This is not the first time Pandora has offered video ads to unlock paid features. Rather, the new video ads are an expansion on Pandora’s existing Video Plus offering, launched this September. This ad product is already used today to allow listeners to watch video ads in order to access subscription-only features like the skip more songs or replay tracks.

The on-demand video ad option has been in testing for a few weeks ahead of today’s launch, with 2 out 4 users accepting the reward offer, and about 90 percent watching at least 15 seconds of the ad.