It’s refreshing to wear a mechanical watch. The soft sweep of the seconds hand reminds us of the fleeting nature of time while the endless ticking in a dark room is a comfort and a spur to action. Add in a little limited edition provenance with big face and crown and you’ve got a stew going.

This particular stew is called the Alpina Startimer. It is a pilot’s watch, a watch with a large face and huge numerals used by old-timey fighter pilots during World War II. Designed with a huge crown which, as William Gibson wrote, “is rather more than usually prominent, so that you can do it without removing your whacking great RAF pilot’s gloves,” the pilot’s watch is the ultimate in utilitarian wrist-wear. You don’t admire a pilot’s watch, you address it for a split second while preparing to take Gs in a barrel roll.

This particular model is made by Alpina, a smaller Swiss manufacturer that has long specialized in a larger, bolder watch. The $1,150 piece runs a AL-525 movement which is based on the Sellita SW200. This is a Swiss movement that is, to a degree, mass-produced and is considered a workhorse in the watch world. It is part of their Startimer line but features special design cues and a limited edition engraving. 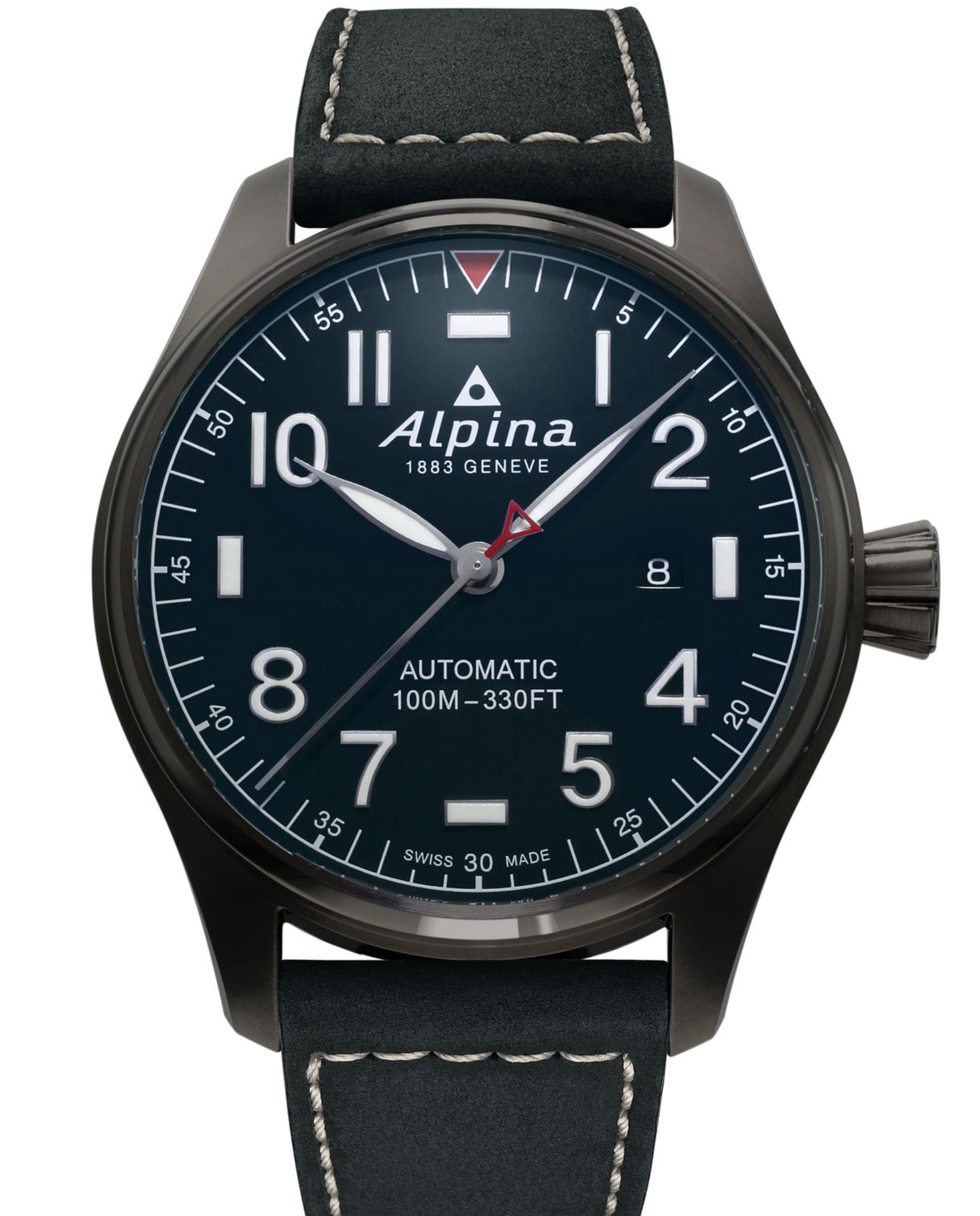 This piece is a commemorates Michael Goulian Aerosports, a stunt aerosports team that, we learn, straps these things to their wrists and whizzes around obstacles. The watch “is presented in a special edition box alongside a miniature model of Michael Goulian’s Red Bull Air Race World Championship competition airplane” and is aimed at fans of little planes that go really fast.

What’s special about this watch? Well, it’s a nicely made automatic watch at a price point that is on par with other entry-level pieces in the space. It has great lume – the numerals and hands glow in the dark making it very readable – and the band is a little thin but well-made. If you particularly like this mix of red, black, and titanium it’s a definite keeper.

I, for one, prefer either a steel or dark PVD pilot’s watch. All the bright metal on this piece is a bit distracting and takes away from the utilitarian nature of the original pilot’s watches. The traditional pilots watch also has broadarrow hands – IWC makes one that is a good example of the standard design – and the decision to add thinner hands to this piece is a bit incongruous.

I wore it off and on for a week and found it to be very readable and very precise. Watches slow down over time but this one managed to keep solid time over seven days with an average loss of a few minutes by the time my test was over. Again, you don’t buy these sorts of things to maintain atomic accuracy, you buy them to be reminded of a simpler time in aviation history.

Ultimately when it comes to a piece like this you’re buying quality and then design. The quality is there as Alpina has been making solid, dependable watches for decades. The design is subjective and if you’re into a “rather more than usually prominent” crown with a bold, handsome face then you could do worse for yourself. Now all you have to do is buy yourself some whacking great RAF pilot’s gloves and you’ll be set to take to the skies.