PayPal and Facebook are expanding their integrations today with the launch of an extension for Messenger that allows PayPal sellers to invoice buyers directly through private messaging. The feature is ideal for use with Facebook’s numerous Buy and Sell groups as well as Facebook Marketplace, in addition to being an easy way to send PayPal invoices in general.

The launch comes on the heels of last month’s debut of person-to-person PayPal payments in Messenger, and the arrival of PayPal’s first customer service Messenger bot for handling customer questions and requests for help.

The two companies had been working closely together prior to that, too, including through a partnership announced last year that allowed U.S. customers to shop online merchants via their Messenger bots, then transact in the app via PayPal.

This time, the focus is on shifting small business transactions and those between buyers and sellers into Messenger. 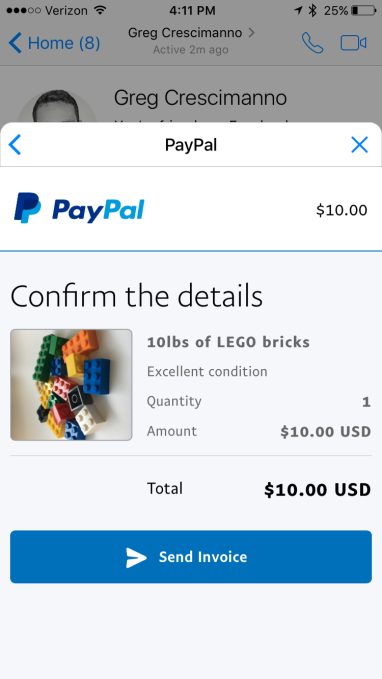 The new PayPal chat extension allows a seller to create and send their invoice without leaving the their conversation, so the buyer can act on it immediately. To use the extension, sellers open the extension tray in Messenger, select PayPal, then create a simple invoice by filling in details like item name, description, price and quantity. The invoice can also include a photo.

When the buyer receives the invoice, they just press “Pay with PayPal” to complete the transaction. If they’re signed into OneTouch, they can checkout without having to re-authenticate with their password.

Like other PayPal transactions, those taking place over Messenger are covered by PayPal Purchase Protection for Buyers – meaning, when the invoice is issued and paid, buyers are protected.

PayPal says the Messenger integration is only one of other partnerships it has planned to help make commerce easier wherever transactions are occurring, but doesn’t have any other deals it’s preparing to announce at this time.

The launch could have a notable impact on how business is done on Facebook. The social network said last fall that its Buy and Sell groups were visited by some 450 million people monthly; and Messenger today has 1.3 billion monthly users. Meanwhile, Facebook has recently been expanding its investment in Marketplace, having just added dedicated sections for cars and housing rentals, in an effort to better compete with Craigslist.

At the time, the company said search volume in Marketplace had grown 3X globally since the start of 2017, with 18 million listings being added in the U.S. alone in May. There was also 77 percent growth in unique conversations between buyers and sellers over the first half of this year, Facebook noted.

That leaves room for a product like PayPal’s to aid with transactions, given Facebook’s lack of interest in building out a payments business itself.