At last month’s Twitchcon, the game-streaming site Twitch’s annual conference, the company unveiled a suite of new tools for video creators on its platform designed to help them grow their online channels and make more money. Two of those tools — Achievements and Stream Summary — are today going live, the company announced this afternoon.

These two tools are specifically focused on helping creators better understand what sort of content is resonating with their audience, how it performs and track their path to becoming a Twitch Affiliate or Partner.

The Twitch Partner program has existed for some time, allowing popular video creators to monetize their channels with monthly subscriptions and ad revenue share. This past spring, the company introduced a second tier called Affiliates.

Currently, Twitch Affiliates can earn money through things like Cheering with Bits (a sort of virtual tipping mechanism), subscriptions and game sales, similar to Partners. However, they don’t have the same level of access — for example, Affiliates can’t offer custom Cheermotes and only get one Sub Emote (a custom subscriber emoticon), compared to the 50 Sub Emotes available to Partners.

For those Twitch creators who want to work their way into these higher tiers, knowing where you stand now and what’s required to move up is key.

That’s where the new Achievements feature comes in. 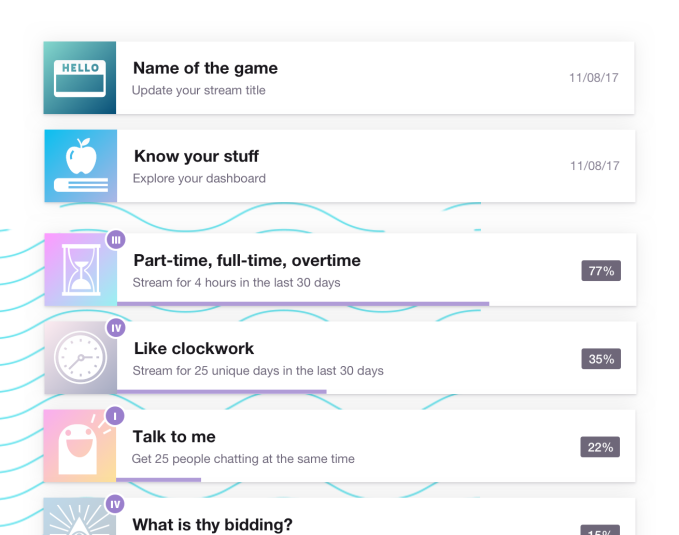 Starting today, streamers will see a new page on their Dashboard called “Achievements” that displays progress bars under each milestone that has to be hit before applying to either the Affiliate or Partner Program.

Meanwhile, Stream Summary let creators view detailed analytics about their stream that may help them achieve various goals — like engaging fans and getting them chatting, for instance.

The summary page includes a list of various viewership stats from past streams, like number of viewers, new followers and chatters. Creators will also be able to see the top Clips from their streams, source of views and other stats that will count toward becoming an Affiliate or Partner. 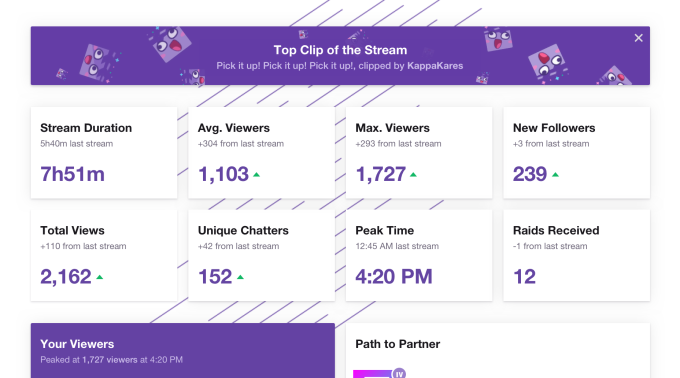 Tools like these are important not only to the creators themselves, but also to the company’s bottom line. Twitch splits the revenue generated through Partners and Affiliates channels, so the more people it can push into these money-making tiers, the better.

Those programs have been growing steadily, the company also said in October.

The Twitch Affiliate Program has grown to include more than 110,000 video creators, and more than double the amount of money was paid to individual Partners in 2017, with 71 percent more money generated on average.

In total, the site reaches 15 million active daily users, and is used by over 2.2 million creators monthly. That leaves plenty of room for these programs to further expand their ranks.

Correction: The feature name is Stream Summary, not Summaries, even when plural. The story has been updated to reflect this.