Facebook is cleaning up the redundancy in its Snapchat Stories clones. Today Facebook is killing off the Messenger Day brand and merging the chat app’s stories feature with Facebook Stories. Now, just called “Stories,” 24-hour ephemeral posts in either Facebook or Messenger will appear in both apps, and viewing will be synced, too, so you won’t see a Story as unviewed in one app if you already watched it in the other.

To be clear, Messenger will still have Stories, they’re just called Stories instead of Day.

“We needed to make it easier for people to share Stories across different apps,” Facebook product manager Connor Hayes tells me. “Some people actually thought these experiences were already connected. We feel like it would make sense.”

However, the cameras in Facebook and Messenger will remain distinct, with Facebook’s focused on augmented reality masks and effects, while Messenger focuses on adding captions and stylized text inviting friends to hang out. But Hayes says “now that we’re connecting the two experiences, it makes sense for them to have the same name.”

Simplifying the Stories offering and giving posts more exposure across the apps without manual cross-posting could boost usage of Facebook Stories, which hasn’t exploded with popularity like Instagram Stories. As we first reported last month, Instagram has been rolling out a “cross-post to Facebook Stories” feature that will now populate to Messenger too, though there’s no current plan to allow Facebook Stories to be pushed to Instagram.

Facebook hasn’t given guidance on the popularity of Facebook Stories but it said Messenger Day had 70 million daily active users in September, versus 300 million on Instagram Stories and WhatsApp Status, and 178 million on Snapchat’s whole app. But looking forward, with all the new launches, Hayes says “we’re very optimistic.”

Meanwhile, Facebook is also getting rid of its Facebook Direct feature for private ephemeral messaging, and instead will route all Stories replies and Facebook Camera messages through Messenger. For now, that means there’s no longer a disappearing messaging option on Facebook, as Direct used to delete photos and videos after they were watched and the conversation around them had died out. 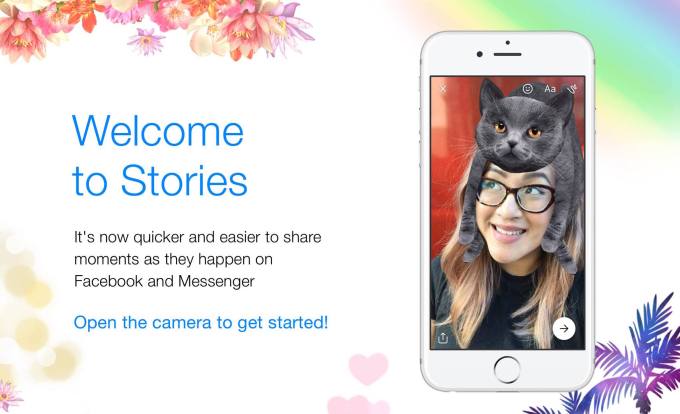 At face value, the end of Facebook Direct could appear to be a win for Snapchat, which sees ephemeral messaging as its primary use case and differentiator after all of Facebook’s apps cloned its Stories feature.

But it could foreshadow Facebook launching a more legitimate ephemeral messaging feature inside Messenger, which already has 1.3 billion monthly users. Direct was building a user base from scratch and never seemed to catch on, so putting disappearing messages in Messenger could be a much bigger threat to Snapchat. For now though, Facebook tells me ephemeral messaging is not an option in Messenger and it doesn’t have anything to share on future plans here.

Also announced today, Facebook is launching collaborative Facebook Stories for Groups and Events where members can contribute posts that the rest can see, which could be great for parties, weddings, and meetups.

Plus, looking to boost usage of Facebook Stories in the developing world, which Snapchat hasn’t prioritized until now, Facebook is allowing users of its stripped-down low-data-usage Facebook Lite app to view Stories. The ability to post will come to Facebook Lite soon. You can read our full write-up about Facebook Stories for Groups, Events and Lite here.

Beyond cross-posting and synced viewing, Facebook is also implementing new privacy controls for Stories that run across both its main app and Messenger. You’ll be able to make Stories visible to the public, friends only, friends and connections (which includes non-friends you’ve “added” on Messenger) or a custom list of specific friends.

If there was any doubt that Facebook is in it to win it in the Stories war against Snapchat, that should be laid to rest now. Facebook isn’t retreating from Stories, even as it cleans up the product line. Though usage may be slim to date, the company is betting that it’s not just U.S. teens that want to share ephemeral slideshows of photos and videos. Even if it takes years, the prominent placement across its apps could slowly lure in late adopters to share their daily lives, not just the big highlights.

People are vain. They crave attention. Show their selfies atop another billion-plus user app with no additional chore, and they’ll feel more compelled to share.