Twitter unveiled in its Q3 earnings report that it had been testing a new, self-serve advertising subscription aimed at small businesses. That service, known as Twitter Promote Mode, is officially launching today with the goal of letting small businesses and personal brands more easily run ad campaigns on Twitter’s platform by automating them, for the price of $99 per month.

As previously reported, Twitter Promote Mode automatically amplifies users’ tweets and profile after it’s enabled. The idea is that the automation could save time and effort, because it doesn’t require users to create their own ads or start an ad campaign. 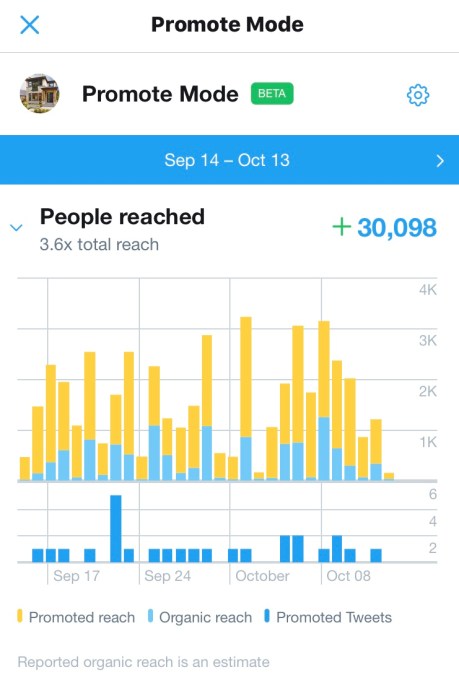 The tweets that are turned into ads through the new program appear just like any other Promoted Tweet. That is, they also display the small “promoted” badge which indicates they’re an ad.

The difference is that users don’t have to do anything different to have these tweets seen by a wider audience – they just continue to tweet out their same updates, links and media as before.

However, there are some drawbacks to relying on an automated solution.

For starters, participants cannot choose which tweets to promote – they can only toggle Twitter Promote on or off. In addition, the tweets can be only be targeted by selecting up to five interest or metro locations or regions in a selected country. That’s a less robust targeting solution compared with Twitter’s existing ad platform.

The new program also includes analytics, so subscribers can track the impact of their promoted tweets.

Through a mobile-optimized dashboard, Twitter Promote Mode will display how many people saw a subscriber’s tweets or account during the current period, including both the organic reach and the Promoted reach. Subscribers can also track the number of followers they’ve gained, profile visits, and the performance of individual tweets.

According to Twitter’s FAQ about Promote Mode, only those accounts with up to 2,000 followers will see the most value from this subscription at launch, but the company plans to offer additional, higher-priced subscription tiers for accounts with larger followings in the future.

Twitter doesn’t make any guarantees about the gains subscribers will see with the program, saying those will depend on targeting selections, account type and frequency of tweets.

However, the company does say in its FAQ that accounts on average will reach 30,000 additional people and add 30 followers each month.

The launch of Twitter Promote Mode follows Twitter’s recently announced Q3 earnings, where the company reported a gain of 4 million users, but a decline in ad revenue. For the fourth straight quarter, Twitter’s total ad revenue declined year-over-year, dropping by 8 percent to $503 million. U.S. revenues declined 11 percent to $332 million, while international revenue was up 6 percent to $258 million.

Twitter Promote Mode is available today as a public beta in the U.S. and U.K. only. It will be rolled out to Japan in the near future, and is also available through Twitter CRM tools partner, Sprout Social.