Target is rolling out a new way to shop using augmented reality technology, initially on its mobile website. The feature, called “See It In Your Space” will allow online shoppers to use their smartphone camera with Target’s website in order to see how furniture they’re considering buying will look in their room.

The option is currently only available with 200 “Project 62” brand home products from Target, but the retailer says it will roll out to hundreds more products by year-end – including other Target home furnishing brands like Threshold and Pillowfort. It will then reach “thousands” of home décor products by 2018.

To use the option, you’ll click a button “See it in your space” from the product detail page on the Target mobile site. You then take a photo of your space and move, scale and rotate the product in question using directional arrows and other controls, or by pinching and dragging the object across the phone’s touchscreen.

The end result is a photo of the product – like a chair, table, shelf, cabinet, etc. – in your own room. 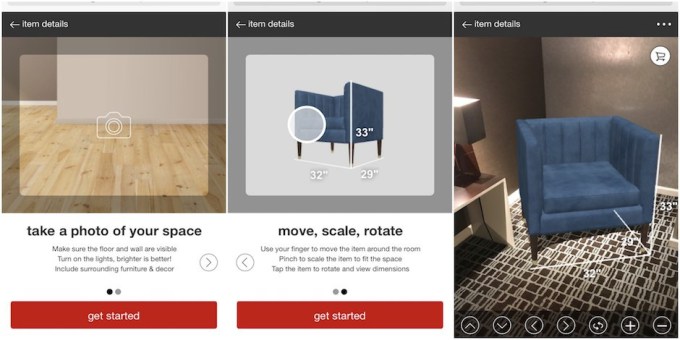 You can choose to add the item directly to your shopping cart on the image that appears, if you decide you want to buy right now.

Target tells us the feature was developed in-house over the past six months, and uses WebGL technology to render the interactive graphics in the browser.

In the future, the retailer may consider bringing this to other platforms, like desktop web and native mobile. But that may depend on the feature’s adoption and feedback from guests.

“We developed the interface on mobile web first because we wanted to reach a wider audience more quickly,” a Target spokesperson explained to TechCrunch. “We also feel like by using mobile web, it’s a simple experience – guests can easily snap pictures using their phone, they don’t have to use any additional hardware or apps. We just felt like it was a really straightforward experience,” they said.

Of course, Target is not the only furniture retailer that’s using AR to aid with shopping. Wayfair also recently added augmented reality features to its mobile shopping app; vintage and secondhand furniture marketplace Chairish did this as well, as did Housecraft; and IKEA just last month was among the first to adopt Apple’s new ARKit technology to add AR to its app.

In addition, home design resource Houzz rolled out a new version of View in My Room 3D with a catalog of half a million objects that can be shopped in AR.

Amazon, too, has AR stickers but they’re not practical or useful – instead, they’re silly add-ons to its camera search tool, and don’t represent a breadth of products.

“See It In Your Space” isn’t Target’s first experiment with using augmented reality on its website.

The retailer last year launched a 360-degree shopping experience with virtual living rooms to see how items would look in a real-world environment. That addition leveraged CGI (computer generated imagery) and worked with around 140 products at launch, Target said.

AR isn’t the only newer mobile technology Target has been testing lately. The retailer also recently partnered with Pinterest to integrate visual search (Pinterest Lens) into its apps and website. This feature lets  you snap a photo of any product, then get matched to other similar items from Target’s catalog.