Indiez is an up-and-coming freelance service that aims to bring a higher standard to a world that is dominated by the likes of Gigster, Upwork and Fiverr by taking a different, team-led approach.

There are already plenty of options for developers who opt for freelance work perhaps because they don’t like the shackles of a single day job, want to moonlight outside of office hours, or have opted for a remote lifestyle.

In many cases though, there is a compromise. The choice to freelance via a platform will require working on tedious jobs with varying levels of incoming and projects — and then there is the uncertainty about clients.

That was the case for Nitesh Agrawal, co-founder of Indiez, who begin working on Upwork to give himself more freedom and the opportunity to travel following a stint with Housing.com, the Indian startup backed by SoftBank among others.

“I got work, but it didn’t feel right,” he told TechCrunch in a recent interview. “I had to undercut myself on price, for one thing.”

After meeting traveling developers and designers following a trip to Vietnam, Agrawal decided that there must be a better way to handle freelance working — not just from the point of view of talent, but also the clients using the services themselves. Together with three friends, he founded Indiez which aims to create a remotely distributed community of talent which works together on projects in a team-focused approach unlike alternative platforms.

Beyond developers, Indiez is open to product managers, analysts, data scientists and copy writers. The company heavily vets its applicants — Agrawal said just 0.5 percent are accepted — and then it pulls them together into teams for projects based on what its clients seek.

So that means that rather than flying solo or operating as a detached part of client’s team using other platforms, those on Indiez are regularly paired with others in community which Agrawal believes helps them develop and operate in a way that is more like a regular working environment. That can help development without a huge compromise.

“We put teams together in less than a day,” he explained. “Our talent can be anywhere in the world and they choose the problem they want to work on.”

Indeed, many are. The community has a Slack group in which people can share their location, trade tips and generally chat like you would if you worked for a regular company.

"Sea is a perfect metaphor for a freelancer’s life" Anton quotes as he works from the Black Sea. 🌊#futureofwork #workstation #startup pic.twitter.com/N8t1umb8zo

The money is also a draw. Indiez takes 20 percent of project fees, leaving the remaining 80 percent to the workers who, it said, on average can make over $5,000 per month for 30-40 hours of work per week. The community of 300 includes people currently at, or formerly with, Google, Facebook, Airbnb, Uber, Spotify, Grab, WeChat, Evernote and more.

Agrawal claimed as many as half of the community are gainfully occupied with a day job. They use the service, he said, to develop new skills and try out different kinds of tech that they’re curious about within a serious environment. 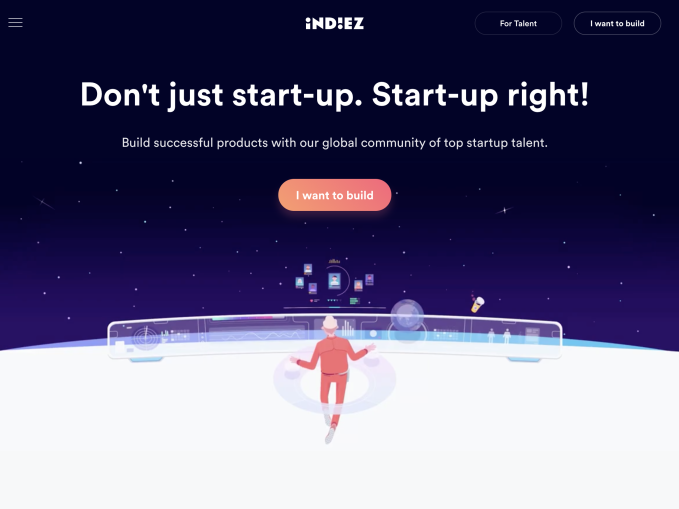 For clients, the community-team approach makes plenty of sense as it allows them to solve larger and more complicated problems than they might otherwise tackle via a freelancing platform. And at a cost that is lower than contracting an agency.

Agrawal and co-founders Ishan Shrivastava, Amrose Birani and Archit Kejriwal began the business in February 2016 and bootstrapped it all the way to this summer when they decided to take a $500,000 seed investment led by Haresh Chawla, a partner at Indian VC TrueNorth who invested in a personal capacity.

The Indiez business has been profitable from its early days, but the startup plans to use the raise to build out its technology — which includes its own productivity and management system — and push into the U.S. where it believes it can make an impact.

“It’s not just about money but building quality stuff and enjoying a freer life,” Agrawal said. He believes this pitch will appeal to people in North America with the skills and desire to make a change in how they work.