Stripe, the payments startup is now valued at $9 billion, is today taking the wraps off its latest effort to help its customers — which now number in the hundreds of thousands, and include companies like Lyft, Salesforce, Facebook, Deliveroo, and the U.K. government — generate more transactions, and thus greater returns for Stripe itself.

It is launching Elements, a free toolkit that Stripe is rolling out globally for Stripe users to build customised checkout experiences.

Similar to Stripe’s core payment service — which works by way of an API, meaning users simply add a few short lines of code to bring the payment feature into their site or app — Elements is based on “building blocks” that companies can use to add in different features like alternate and localized payment methods, autofilling scripts, mobile payments, and responsive design that adjusts to whatever screen is being used. You can see some examples and test them out (if you are so inclined) here.

Elements is significant for a few reasons:

Through Elements, Stripe is making an effort to tackle one of the larger pain points and most persistent problems in the world of online commerce: shopping cart abandonment.

On average, nearly 70 percent of all e-commerce visits fail to result in actual sales. While some of that may be due to people simply not prepared yet to buy, or a price turning out to be too high, another big reason is a range of issues related to the check-out process, such as lack of payment methods, credit card declines and complicated check-out processes: 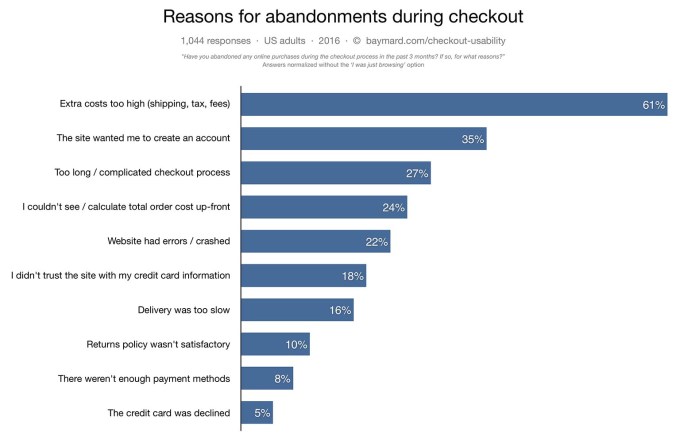 Stripe itself found that in its own analysis of the world’s 100 biggest commerce sites that 72 of them had three or more errors in their checkout flows, nearly half did not use auto-fill correctly, and one-fifth were failing to revert to numerical keypads for entering credit card numbers on mobile.

The introduction of Elements also comes at a time when Stripe is growing more into its skin as a payments behemoth, doing more than just providing an API for companies to take payments.

“What led us to build this was less a specific request from a set of users, and more our team realizing that this is something that affects literally every online business, and Stripe is in a position to help,”said Lachy Groom, Stripe’s head of payments products.

“To be honest, we didn’t realize how useful something like Elements would be when we first started building Stripe. Now we’re about six years in, supporting hundreds of thousands of users, and what we’ve found is that, time and time again, each individual business is reinventing the wheel. And it’s actually a pretty complicated wheel: there are hundreds of small things to tweak and optimize for,” he said.

This has been a gradual evolution for the company: it has over the years added in new services like Radar, to help with fraud prevention, and an easy way for businesses to incorporate in the U.S. when they are based abroad.

Atlas, the incorporation product, is now available in 125 countries after getting open to US-based founders earlier this year. Radar, Groom said, “is also doing well, with lots of companies planning to rely on Radar for the upcoming holiday season.” There is apparently an update coming on that product that is likely to hit before the holiday season, when online shopping goes bananas.

While Elements is free to use for Stripe customers, it’s also interesting move by the company as it continues to lock down different elements of the both the commerce experience and the act of running a business online.

Key to Stripe’s message has always been the convenience factor, and as more companies incorporate online into their bigger strategies, or refresh their legacy systems with better and more updated technology, Stripe has an opportunity to snag a lot of business from the old guard.