Alongside the introduction of the new 4K and HDR ready Apple TV, the company today also announced that it’s bringing its “TV” app to more countries outside the U.S. The TV app, which works on Apple TV, iPhone and iPad, arrived late last year as a more centralized resource for finding things to watch, including video from across TV networks’ apps, select streaming services and, of course, Apple’s own iTunes.

Today, the TV app supports more than 60 services on Apple TV and iOS devices, but that number will increase soon.

The app was first introduced in the U.S., but is now heading to seven more countries worldwide, starting with Canada and Australia, which will receive the app later this month. Meanwhile, a handful of other countries, including France, Germany, Norway, Sweden and the U.K., will receive the TV app by year’s end, said Apple’s Eddy Cue. 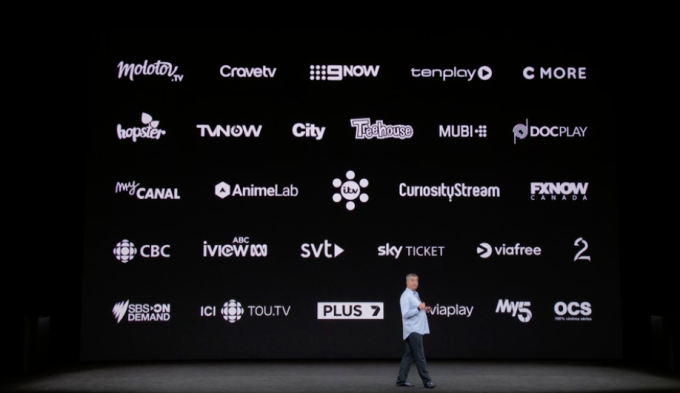 Of course, with its expansion outside the U.S., the TV app will need to expand its content sources, as well. Apple noted this briefly, showing a slide of the various non-U.S. services the TV app will soon support in the various geographic regions, like Molotov.tv, CBC, FXNow Canada, Sky Ticket and several others. It’s adding the educational-focused streaming service Curiosity Stream, too.

However, the more exciting news in terms of the TV app is the update that will bring a new experience for sports viewers.

Later this year, the TV app will make it easier for those who are interested in getting updates about their favorite teams just by asking Siri. For example, you can say things like, “Watch the Warriors game” or “What’s the score of the Cubs game?,” Apple suggests.

In the U.S., fans can use the TV app to track their favorite teams and get notifications about when they’re playing via a dedicated Sports tab. This will also include other information about the teams, leagues and various events.

Unfortunately, what the TV app lacks is access to some of the top streaming services, like Netflix. Instead, its focus, for the most part, is more on authenticating pay TV customers with those TV Everywhere-powered apps that allow you to watch TV on the go. (It does have Hulu, CBS All Access, Showtime, HBO NOW, plus a few others that aren’t the networks’ authenticated apps.)

But pay TV is a dying industry — it’s seeing record declines in subscribers as cord cutting takes hold. The TV app, then, is catering to the wrong trend by making things easier for traditional TV viewers, rather than making it easier for streaming service subscribers.

Also of note, Amazon Video is still due to arrive on Apple TV later this year, as promised. It’s doubtful it will make its way to the TV app, however, but Apple hasn’t said.