Earlier this year, Facebook signalled a plan to move into LinkedIn’s territory with the launch of job advertising. Now it appears to be taking another step to help develop the professional you. TechCrunch has learned that Facebook is testing a way to use its social network to link up users who are looking for mentorships, either as mentors or mentees.

Our first look at the mentoring service came from a source, who had found a couple of references to mentoring in Facebook’s code. They appear to be fragments from a set of guidelines for mentors, introducing them to the program:

Later, we saw that another person, social media manager Matt Navarra, spotted an internal run of how the feature would look on the mobile app. It appears that the app matches a mentee’s interests up with those of the mentor’s, and by way of introduction, gives them a list of points they have in common, including friends, education, geographic location and — most importantly — profession: 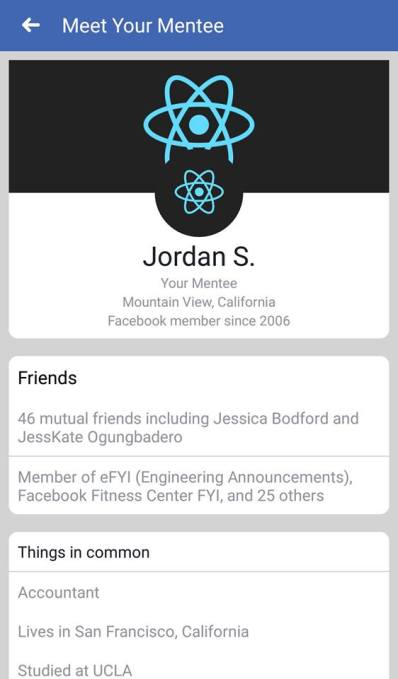 Working on a mentorship service would be a logical step for Facebook for a few reasons.

The first has to do with its leader’s ambitions.

In May, Facebook’s CEO Mark Zuckerberg wrote a post about his plan this year to visit every state in the U.S. where had yet to spend much time, in particular meeting with different groups that highlighted persistent social issues in the US (and no, Zuckerberg insists he’s not interested in running for political office). In that post, he noted ways that he thought Facebook could help people improve their lot in life.

One area he honed in on in particular: By leveraging the size of the social network, Facebook could facilitate mentoring relationships to help people raise their job prospects. Zuckerberg also noted that he was starting to build this with teams at Facebook.

“Facebook has been focused on helping you connect with people you already know,” he wrote. “We’ve built AI systems to recommend ‘People You May Know’. But it might be just as important to also connect you with people you should know — mentors and people outside your circle who care about you and can provide a new source of support and inspiration.

There are a number of models for how this might work. The Peace Corps creates service opportunities where people exchange culture and build new relationships. Perhaps we could build a new digital peace corps. Another model is Alcoholics Anonymous and Narcotics Anonymous, where people who have struggled with these challenges and overcome them go on to become mentors for others, with the hope of training them to one day become mentors themselves. This is something I’ve only recently started studying and working with our teams at Facebook to build.

The second reason this makes sense has to do with Facebook’s development of career services.

As we noted, earlier this year, the company finally took the (long anticipated) plunge into recruitment, letting businesses that have Pages on Facebook now augment them with ads for jobs.

The move was seen by many as a direct competitive hit to Microsoft-owned LinkedIn, which is far smaller in size (around 500 million users compared to Facebook’s 2 billion) but has a reputation as the go-to social network for the working world — a place where people go to create a public, professional profile for themselves, to network with others in their field, for career development and to look for jobs.

Interestingly, just earlier this summer, LinkedIn unveiled its own free mentoring program, as a way of complementing its existing business and to drive more career-related traffic to the site. Offering a mentoring service could be a way for Facebook, too, to drive more traffic to its job-listings and to build its reputation as a place to develop your career.

The third reason this makes sense relates to a more general trend at Facebook itself. As the company matures and we reach our fill of reconnecting with people we knew in college and high school, jobs and current social lives, Facebook has been on the hunt for more ways of leveraging its social network, and building even more connections across it (beyond actual friends) to boost engagement.

These have included various twists on the basic idea of discovering yet more people on the network, people who may not be in your immediate circle but match your interests and location, or are friends of friends who you have yet to connect with, or might be someone you might like to actually meet, Tinder-style, based on compatible interests.

What we’ve seen of the mentorship service feels like it has been developed in the same vein as the people discovery feature, with the listing of common friends and other compatibility markers.

But mentoring has a key difference: some of the new discover people features raise questions of just how much we want to connect with those on Facebook who we don’t actually know or consider friends already. To some the service can even feel a little stalkerish.

Mentoring relationships, on the other hand, are more mutually complicit and separate to any expectation of friendship — despite the direct connections and private chats you will have with each other. It signals a new phase for Facebook, but one that is not out of step with its move into services like Workplace, job ads, and commercial activities like Marketplace.