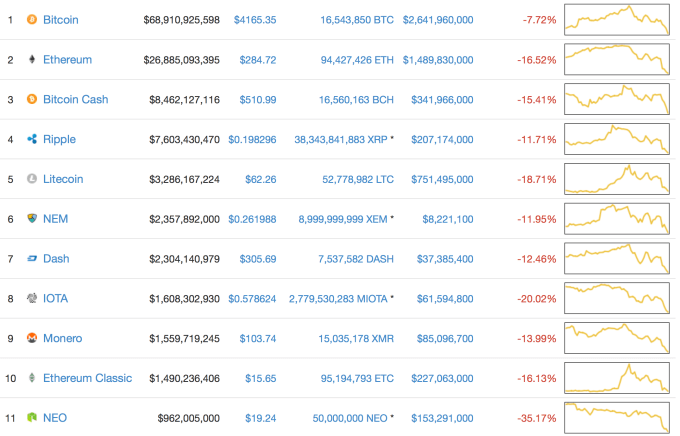 The cryptocurrency correction may have started.

After months of unprecedented appreciation, almost every digital currency is seeing double digit losses over the last 48 hours. While a quick glance at the chart above or at coinmarketcap.com shows how bad things have been, you can get a sense of where things are by looking at losses in the two largest currencies: Bitcoin is down 16.5% over the last few days and Ethereum is down 23.5%.

The cryptocurrency market as a whole has lost 20% in just two days as it fell to $142 billion, down from a total market cap of about $180 billion on Saturday. This crash is large enough to make a noticeable dent on the all-time chart of cryptocurrency’s market cap – meaning this could be a crash that won’t be forgotten about quickly. 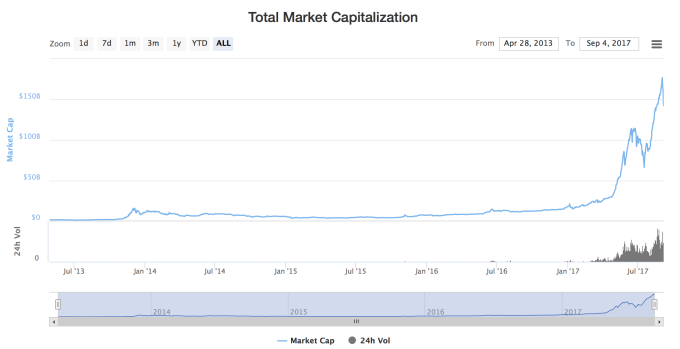 Of course it’s important to put things into context – this “crash” still leaves Bitcoin at double the price it was just four months ago. But it shows why “investing” in cryptocurrencies isn’t for the faint of heart.

Could you imagine waiting on the sidelines for months as the market basically doubled, then putting a sizable chunk of money into cryptocurrency 48 hours ago, only to watch your investment plummet? Not fun.

This 20% drop represents years of gains in the U.S stock market – which if invested into cryptocurrency this weekend was essentially wiped out in a matter of hours.

So why did cryptocurrency crash this weekend? A few reasons:

This morning China outlawed ICOs, saying they have “seriously disrupted the economic and financial order”. Whenever a government sanctions bitcoin or cryptocurrencies the market always takes a hit, especially right after the SEC warned against the legality of some ICOs.

And since the Chinese government ordered all ICOs to return funds to investors, there’s probably some uncertainty about what will happen to the price of mainstay currencies like Bitcoin and Ethereum when smaller tokens received in ICOs are re-converted back. For example, NEO (formerly AntShares), a Chinese-based ICO/cryptocurrency, is down 50% over the last few days.

Another possibility – the market was simply overheated. This crash started right around the time Bitcoin hit an all-time high of a few dollars under $5,000. In other words this may be a natural cool down – if you look at Bitcoin’s history periods of rapid growth are always followed by some type of downturn – the same thing happens when traditional equities rapidly appreciate.

The next day or so will tell us if this was a temporary bump in the road or the start of the next major correction. For now, all anyone can do is watch and let the market do its thing.