Instagram Stories, its Snapchat clone now used by daily more people than Snapchat itself, is coming to the web. Initially, the feature will allow desktop and mobile web users to view Stories posted by their friends and others they follow. But it in the months ahead, the web version will allow you to post to Stories, too.

Instagram Stories has been only one of an array of attacks on rival Snapchat – along with a dedicated app for teens, Facebook Stories, Messenger Day, and more. But it’s the one that stuck. Today, the feature alone is used by over 250 million Instagram users every day, while Snapchat reports it has grown its total user base to a lesser 173 million daily users.

Though there’s been some backlash about the “Stories” format showing up everywhere these days – from Facebook to Skype and even on dating apps – on Instagram, it makes more sense. The photo-based social network is already about using visual communication as a means of connecting with friends. 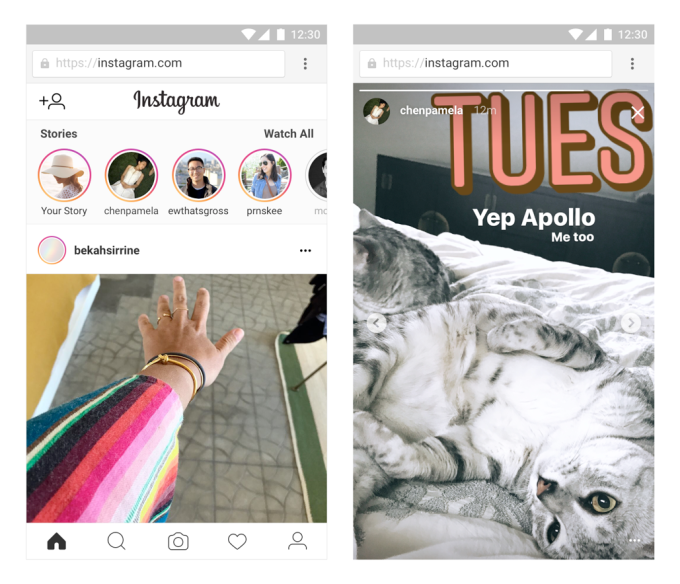 As in the mobile app, Instagram Stories will appear at the top of the page when viewed on the web. You can click into a Story to view it, then tap on the small arrow icons to advance or go back.

The move to bring Stories to the web may seem relatively minor, but it broadens access to the feature, including in developing markets. Over 80% of Instagram’s base is outside the U.S., the company notes. And this expanded reach, in turn, impacts Instagram’s bottom line.

Instagram today is home to a number of businesses who want to market to consumers through their own Instagram accounts and ads, and one in five Instagram Stories posted by a business received a Direct Message reply. That could make it appealing to advertisers who want to reach customers through more private channels.

Instagram says that Stories on the web is rolling out starting today, but the process won’t complete for weeks. Posting to Stories from the web will follow in the months ahead.