Amazon’s $13.7 billion acquisition of Whole Foods closed today, and the grocer is already rolling out discounts on select food items as result. While Amazon last week shared a list of products expected to be discounted on Monday, a trip to local Whole Foods stores indicate that the price cuts are already broader than announced. For example, prices on some grocery staples – like milk, cheese, pasta sauce, meats, and more – have also been slashed as of this morning.

On Friday, Amazon had detailed how the merger between the two retailers would impact consumers. It noted that Amazon Prime would eventually be integrated into Whole Foods point-of-sale system, allowing Prime members to receive special savings and other in-store benefits.

Amazon also said that, starting Monday, consumers would see an immediate impact in terms of lower prices on a selection of groceries. 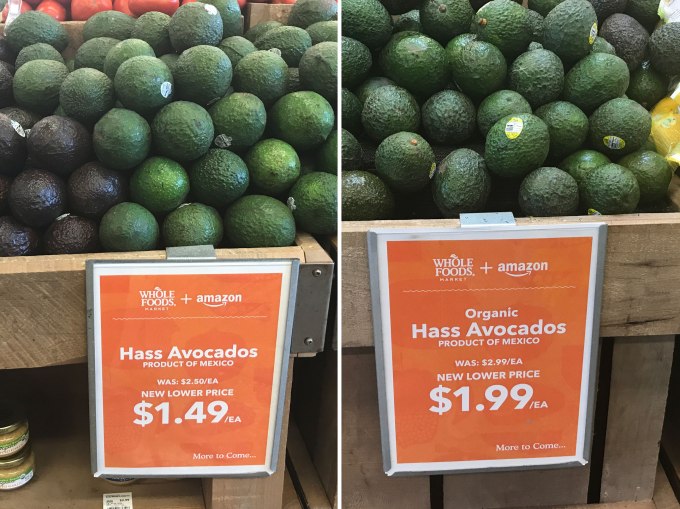 Above: both organic and non-organic Hass avocados saw price cuts

Specifically, Amazon said items being discounted today would include the following:

In a morning shopping trip, we found that milk – including both regular and almond milk – and a wide assortment of cheeses also had their prices lowered, in addition to cases of bottled water, frozen whole chickens, various pasta sauces, and even boneless rib-eye steaks. None of these products were in Amazon’s original list of Monday’s planned discounts. 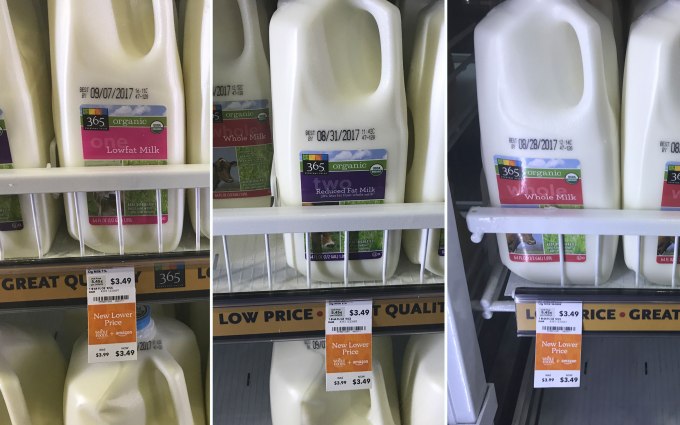 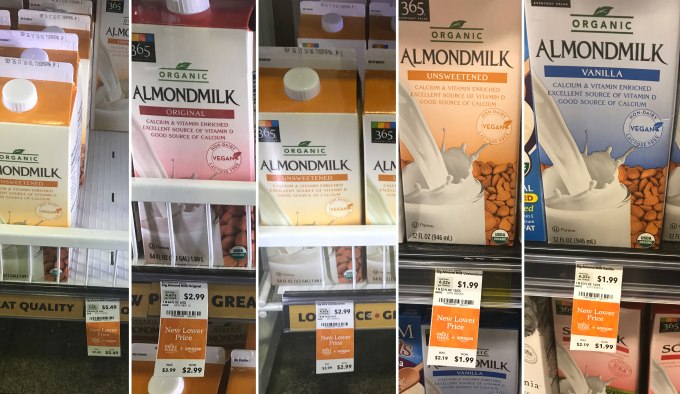 Plus, while Amazon had said that fish like salmon would be one of the first seafood items to see a price cut, we had originally understood this to include fresh fillets and cuts – the kind behind the glass case at the seafood counter. As it turned out, however, packages of frozen salmon received the discount, as well. Before, the Atlantic Salmon Fillet “club pack” was $21.99/32 oz.; today it’s $19.98.

Meanwhile, Amazon had announced only that “organic” rotisserie chicken, previously $13.99 now $9.99 for a whole chicken, would be discounted. But the in-store display’s signage showed that non-organic chicken is today cheaper, too, going from $8.99 to $7.99. Price on half-chickens, where available, were also slashed. (We should note that prices will vary from store to store, but a Whole Foods spokesperson said the items whose prices are being lowered will not.)

And prices on frozen chicken was slashed, too – both organic and not. 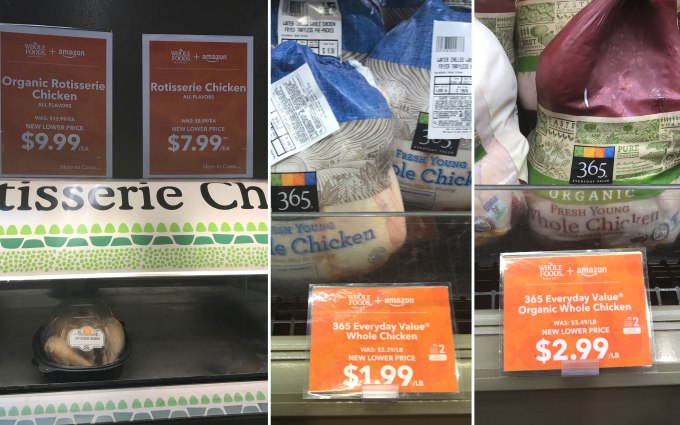 In fact, the trend to discount the “non-organic” item in addition the organic one continued across several products. Amazon had clearly wanted to emphasize how it was making organic groceries cheaper when it announced its list of price cuts last week. But some of the lower-priced non-organic items were cut, too – like frozen chicken, avocados, and eggs. 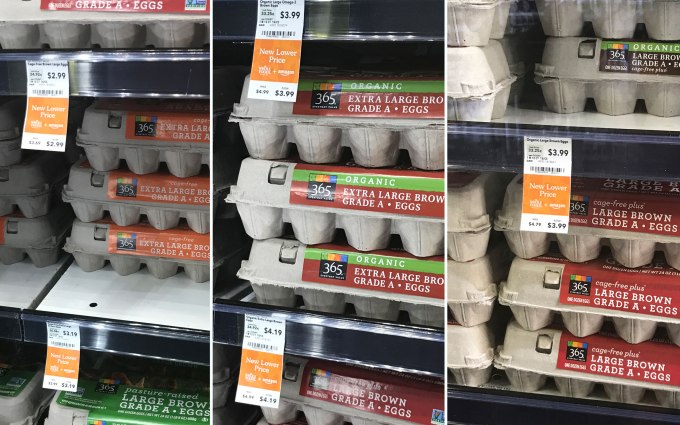 Depending on your market, some of these discounts can be sizable. For instance, organic Fuji apples went from $3.49 a pound to $1.99, or a 43% discount, according to a report from Recode.

However, prices at Whole Foods are higher in some cities compared with others. In one store we shopped, for example, both the Fuji and Gala apples were only $2.99 per pound before the price drop, and they came down to $1.99 per pound. That’s still a better deal, but the discount is not as large. 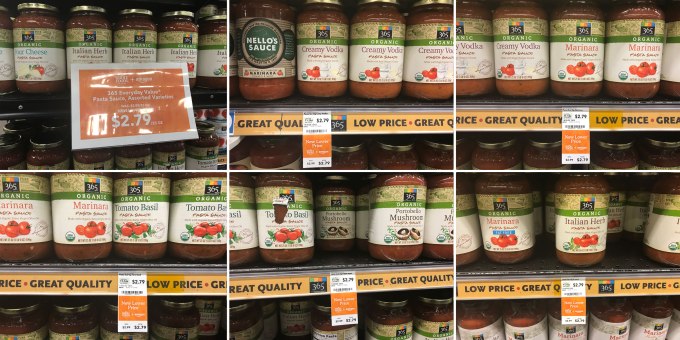 Many Whole Foods stores stayed open late on Sunday night to make the price changes, but Amazon had given stores an 11 AM deadline to have them completed. Some stores were working last-minute to get their signage up, like the Whole Foods in SOMA, San Francisco, which still had the old prices showing this morning when it opened.

Amazon’s plans for Whole Foods extend beyond more affordable groceries. The company will also use the stores as “hubs” for this like ship-to-store e-commerce (like Walmart does today with its “local pickup” discount program); returns, and grocery delivery services.

The eventual plan is to bring down the price of many other grocery items in-store, too. That could lead to further savings on more staples, ranging from bread to cereal to diapers and more. Whole Foods’ brands – including 365 Everyday Value, Whole Foods Market, Whole Paws and Whole Catch—will also become available through Amazon.com, AmazonFresh, Prime Pantry and Prime Now in the future.

Today’s lower prices today are considered a “down payment” on Amazon’s vision – or, in other words, a starting point – Amazon had said. The company has not yet announced how long before more in-store discounts roll out, but store staff was unaware of others in the works this week.