Xiaomi’s good run has continued after a research firm found that the Chinese firm has ranked top for sales of wearable devices worldwide for the first. Sales of Fitbit devices, meanwhile, plunged by 40 percent

Coming off the back of Xiaomi’s reentry into the world’s top five smartphone sellers, a new Strategy Analytics report found that it leapfrogged Apple and Fitbit to become the top seller of wearables in Q2 2017 with 3.7 million units shipped. Fitbit logged 3.4 million shipments during the quarter with Apple coming in at 2.8 million —  the U.S. firm actually posted higher sales growth than Xiaomi. The rest of the field was responsible for a further 11.7 million units, or 54 percent of all wearables shipped during the quarter.

Xiaomi and Apple both grew their marketshare year-on-year (from 15 percent to 17 percent, and nine percent to 13 percent, respectively), but Fitbit’s share cratered from 29 percent to 16 percent.

Both Xiaomi and Apple take very different approaches to wearables. Xiaomi has a wide range of products that are priced competitively and feature heart-rate monitors and alerts — the Mi Band is priced as low as $14.99 in the U.S. — while the Apple Watch, at upwards of $269, is a more premium approach that’s packed with a fuller set of features. While they both stand for something at different ends of the market, Fitbit’s position is less certain.

“Fitbit is at risk of being trapped in a pincer movement between the low-end fitness bands sold by Xiaomi and the fitness-led, high-end smartwatches sold by Apple,” Strategy Analytics’ Neil Mawston said in a statement. 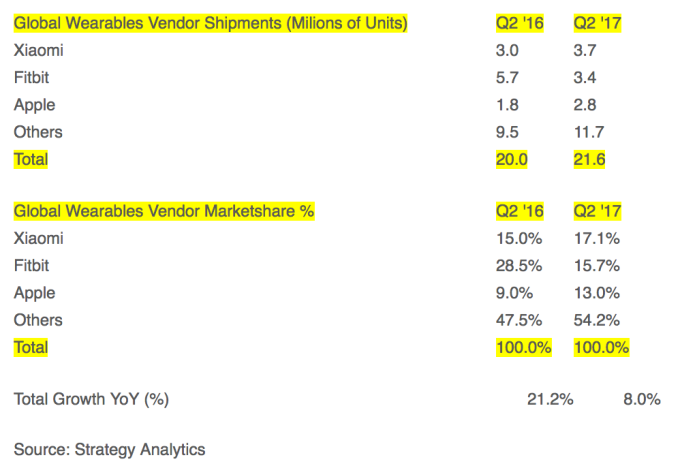 As for the other two, Strategy Analytics said reports that the next Apple Watch may include extended health tracking capabilities could help Apple reclaim the top spot. But for now its lack of health band options is what the firm believes is keeping Xiaomi ahead, the firm concluded.

Xiaomi has had a resurgent 2017 so far, bouncing back from two disappointing years in which it struggled to maintain once-explosive growth and missed sales targets. A push into offline retail in China and progress in India, where the company cracked $1 billion in revenue last year, have contributed to a more optimistic outlook this year, with CEO Lei Jun claiming it has reached “a major inflection point in its growth.”

The company said its phone sales were up 70 percent quarter-on-quarter in Q2 with 23 million sold in Q2. Now it is pushing on with its offline retail strategy and furthering its global expansion plan thanks to a $1 billion loan that was secured last month.