Remix 3D is Microsoft’s community site for sharing 3D models from Paint 3D and other 3D modeling tools. Given the company’s focus on mixed and virtual reality, it’s no surprise that the company wants to get people to think about building the kind of 3D models that bring these new experiences to life. The premise of Remix 3D, as the name implies, has always been that it’s a repository for models that the community can… well… remix.

To make this easier, Microsoft is launching a small but fundamental update to the service that makes it easier to do just that. 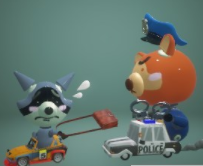 When you look at a model on Remix 3D, you will now see two tabs: parts and remixes. Just like today, the remix section will show you how other users have used this specific model in their creations. The parts section is new, however, and lets you see — and then use — the individual parts that were used to create a given model or scene.

As before, all of this is deeply integrated with Paint 3D, Microsoft’s Windows 10 tool for building and manipulating 3D models. Paint 3D, which launched with the Windows 10 Creators Update, still suffers from the fact that it’s hard to create 3D models on a 2D screen. But it’s also one of the most accessible 3D modeling tools, and if you want to give 3D modeling a try, at least there’s always Remix 3D around to make your creations look a bit more professional.