It was Sunday, Feb. 19, 2017 — her dad’s birthday. And the company was also “literally thrown into shock,” she told me at Uber’s headquarters in San Francisco last week.

“I’ve literally never seen employees so shocked by something and so put off by something,” Hornsey said. “And I then decided, because I could see this hurt, I could see the shock, that what the company needed more than anything, honestly, was to be listened to.”

In light of Fowler’s allegations regarding sexual harassment and management, Uber has overhauled its performance-review process, a key change of which was the omission of employee ratings and ranks.

Cuellar, one of the 600 employees who participated in Uber’s focus groups on reimagining the performance-review process, described Uber’s T3 B3 process. T3 B3s, which Cuellar referred to as “Travis’s brainchild,” detailed an employee’s top three qualities/strengths and the bottom three things one could improve on.

“It was this very exhaustive process of putting on paper what you’re good at and what you’re not good at and, in particular, in context of our cultural values,” Cuellar said.

“Hustling meant being dependable and working hard,” Cuellar said. “Being an owner, not a renter, meant you took your work seriously and didn’t ask a million questions when executing.”

Managers discussed those elements and entered comments into a system designed to calibrate scores on a curve, Cuellar said. “It happened behind closed doors, which was my biggest problem with it, and what I wanted to see solved for in the new system.”

What Uber is learning is that you can’t do everything behind closed doors, she added. That’s probably a good thing, because whatever has happened behind those doors in the past year or so has clearly not been working for the company.

The last six months at Uber were unprecedented, between Fowler’s allegations, the firing of 20 people after former U.S. Attorney General Eric Holder’s workplace harassment investigation, Uber CEO Travis Kalanick taking a leave of absence — before ultimately resigning — and Uber’s involvement in many lawsuits. Moving forward, perhaps focusing on the people is how this multi-billion-dollar company will transform its reputation.

A major qualm among employees about the old process was that it was too subjective and enabled some managers to get away with their biases, Cuellar said. Before, goals were not entered into a system, which made it difficult to hold employees and managers accountable. Now, by entering concrete goals into a system accessible by employees, managers and senior leaders, everyone can work to hold each other accountable.

In addition to setting individual goals around performance, there’s a new citizenship goal, which is all about doing good for someone else — either within the company or outside the company. That could mean doing pro bono work, for example, or essentially doing anything to help fellow co-workers, drivers, customers, etc. Performance reviews at Uber now take all of that into account.

“So we’re shifting the culture very significantly through this process,” Hornsey said.

It’s an irresponsible act for me to give feedback to someone if I’m not trying to have them improve. Frances Frei, Uber SVP of Leadership & Strategy

After Fowler’s allegations came out, Hornsey conducted a survey of Uber employees to find out what they wanted performance reviews to look like moving forward. About a third of employees responded to the survey, and the first 600 to volunteer to be involved in the process were brought in to develop prototypes for performance reviews. Once the focus groups came up with their ideas, they brought that to 200 leaders at Uber. Initially, some of the senior leaders were not down with the proposed changes, Hornsey said. But then Hornsey pushed the “wisdom of the crowd” angle, and the leaders agreed.

“For some of them to let go of ratings — you know, giving you a number — was against like 20 years of their experience,” Hornsey said. “But they did it because they saw that it was a real moment to listen to our employees.”

“Long story short, we’re going to take that self-evaluation piece, the peer evaluation and the manager evaluation, which were all written in the tool in prose, and we’re going to use that to sit in committees and calibrate to make sure that we’re very fair around how we link this to bonuses,” Hornsey said.

This new performance review cycle comes shortly after Uber increased the salaries of some of its employees and guaranteed equal pay across the company. What Uber has to do now is ensure “everything we do keeps that system fair and equitable,” Hornsey said.

Feedback as a gift

This is where management and feedback come in. Since joining Uber in early June, Uber SVP of Leadership & Strategy Frances Frei has conducted sessions with 9,000 employees, 3,000 of which are managers, around goals and feedback.

Frei, who sat back in her chair in a small meeting room at Uber, spoke to me about her new goals and feedback strategy. She exuded a level of excitement that I rarely experience in my conversations with tech people about not-so-enticing topics, such as performance reviews.

In that meeting room before I arrived, Frei had outlined her ideas on a whiteboard. She frequently referenced these ideas during our talk, underlining key words like “ambition” and “evolve,” while talking me through her ideal vision for goals and feedback.

The goal, if you will, of correctly using goals within Uber is to facilitate more frequent and productive conversations between managers and their employees, Frei told me. If done correctly, managers will meet regularly with their employees around goals in order to check in on progress.

“This is a whole new muscle for folks that haven’t been taught it,” Frei said of teaching managers about co-producing goals. “Like, entirely new.” 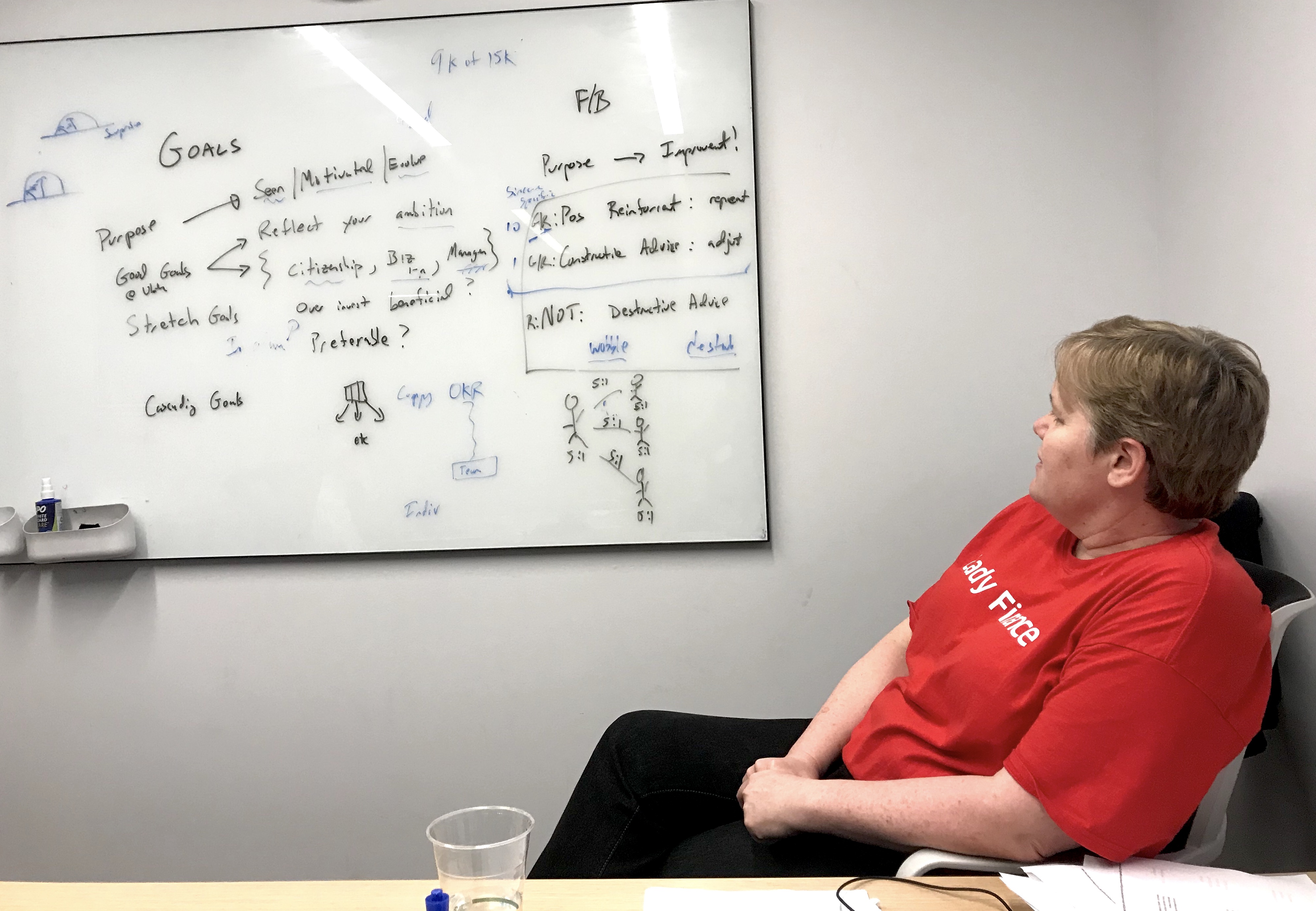 Uber SVP of Leadership & Strategy Frances Frei at Uber’s SF HQ. On the whiteboard is Frei’s vision for goals and feedback at Uber.

But even more important than goals, Frei said, is the “gift” of feedback. Feedback can sometimes be mistaken as judgment and something for which you need to brace yourself, she said. That’s not the feedback process Frei is putting forward at Uber. Instead, she wants to promote the notion of feedback being rooted in improvement, which she refers to as “the dream.”

Frei says there are only two kinds of effective feedback that will help achieve results: positive reinforcement and constructive advice.

“Positive reinforcement is the key to improvement,” Frei said. “This is your secret sauce; keep doing what you’re doing, but now [you] have the wisdom to know what it is.”

Frei then described how she has seen people who used to be good employees, but then some manager said something that unintentionally destabilized them, “and it was just this tragic decline” in performance.

In an ideal world, the ratio of positive reinforcement to constructive feedback would be 10 to one, Frei said. But that’s too high for Uber and for most tech companies. That’s because there’s this notion in tech that when you receive positive feedback, that’s not the “real feedback.”

In order to foster an environment where positive reinforcement can flourish, people need to learn how to receive it. The feedback also needs to be sincere and specific, Frei said. At the end of every week, managers should be able to reflect, and if the ratio is something like five to one, Frei said, “we are in balance.”

In order to get this to stick at Uber, Frei slightly joked that it’s helpful that she’s “super smart and a little charismatic” and gives out Scooby snacks when people get it right.

“So now we have celebrations of people,” Frei said. “We’re celebrating the celebrators.”

Moving forward, with or without Travis

In the midst of this performance review overhaul is Uber’s search for several executive leaders, including a chief executive officer. Rumors abound, with the most recent one being that Kalanick is plotting his return.

Kalanick stepped down in late June after a handful of investors pressured him to resign. Since then, Uber has been run by a committee of 14 executives, which includes Frei and Hornsey.

When asked about Kalanick’s departure and its effect on the company, Hornsey said, “It doesn’t feel much different,” but that she recognizes Uber “might have an opportunity to be a little softer going forward.”

Hornsey would not comment on any potential candidates for the role, but she said Uber’s search committee is looking for someone who has been a CEO before, has gravitas and “can lead this organization through its next iteration.”

No matter who Uber decides to move forward with as its next CEO, it seems that person should also be able to get behind Uber’s new way of thinking that puts people first, and gives employees the agency to effect change both within and outside of the company.