Now that all the major cloud players have reported their earnings, we have seen some eye-popping growth numbers, particularly from Microsoft. Yet in spite of that, AWS maintains a significant market share lead, according to the latest analysis from Synergy Research Group, released last night after Amazon reported its earnings.

AWS, the cloud arm of Amazon.com reported a $4.1 billion quarter yesterday that puts it firmly on a $16 billion yearly run rate. Not too bad for a side business.

That number was good for a 42 percent year over year growth rate, which beat analysts expectations, for whatever that is worth. What’s clear is that AWS continues to generate tons of income for Amazon while maintaining a huge market share advantage. 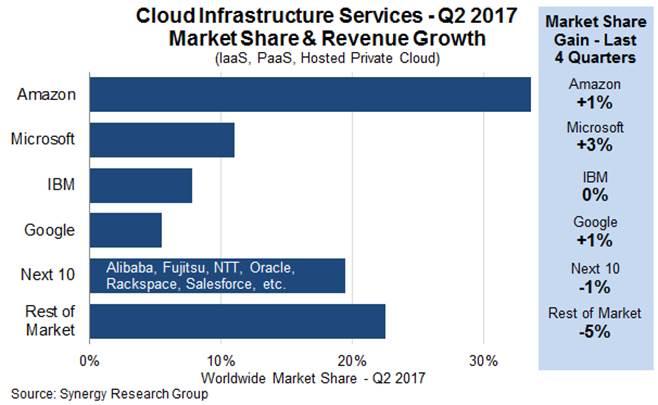 You may wonder how AWS can have such a huge lead, while some of its competitors continue to report dizzying growth. The answer is that it’s much easier to post big growth numbers from a small market share than it is to maintain that kind of growth once you achieve AWS’s market share size.

That was a point that Synergy Chief Analyst John Dinsdale made in the firm’s latest report. “While Microsoft Azure and Google Cloud Platform are doubling in size, IBM continues to dominate in hosted private cloud and AWS is still over three times the size of its nearest competitor,” he said in a statement.

AWS, of course, has always had the advantage of a big head start in the cloud market. They began offering cloud infrastructure services like storage and compute over a decade ago, long before the competition got off the ground, or at least took it seriously.

That head start continues to serve them well. Even as other companies in this space like Google and Microsoft (and yes, even Oracle and Alibaba) have begun to pay much closer attention to this market, AWS has maintained its massive market share advantage.

That’s partly because it was first and partly because even as the competition heats up, the market opportunity is so huge that there is plenty of room for multiple players and multiple winners. 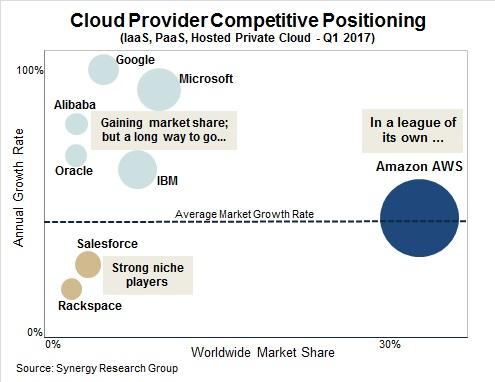 Notice that AWS sits alone on the right side of the graph and all other comers are far back in spite of gaudy growth rates. (This chart is from Synergy’s April 2017 report.)

All of this shows that there is plenty of room for a lot of companies to make a lot of money in the cloud, even with smaller slices of market share. That means, even those companies that came to the market late have an opportunity, and that has to be good news for those who are chasing the leader.