We’ve entered the dog days of summer. For many, that means time on the beach, backyard barbecues and, if you’re like us, seeking out the blissful respite afforded by a solid air conditioning system.

In the land of startups and venture capital, however, summer can mean something a bit different.

Today, we’re tackling the conventional wisdom that investors tend to slow down during these months. It’s a revisit of a piece we wrote last year, but this time, we’ve added a bit of a twist. Rather than just focusing on the seasonal investing behavior of venture capitalists, we also examine how investors in venture capital firms — typically referred to as limited partners, or LPs for short — make their investments throughout the year. In doing so, we’ll track both when venture capitalists raise their own funds and when they deploy them.

For both startup founders and VCs raising money, we’ll start first with sharing our findings before getting into the methodology and conclusions.

Founders can raise whenever they want to

Founders in the United States can rest easy knowing that they’ll be able to raise money whenever they need to. At least these days, summer isn’t the dead zone it’s purported to be. Although there are slight variations in funding throughout the year, there really isn’t a particularly favorable season for closing rounds.*

In other words, any time is a good time to raise money.

In the chart below, we’ve plotted the distribution of six years’ worth of venture capital deals struck with U.S.-based companies throughout the year. Note that the Y axis represents the percent of deals struck in a given month, and that, if there were a truly even distribution of deal-making throughout the year, all bars would be at the same height: 8.33 percent (equal to 100 percent divided by 12 months of the year). 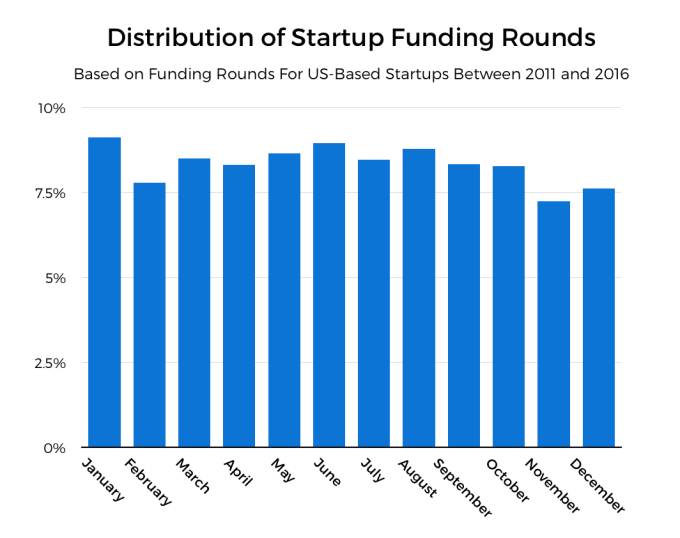 Although there are slight bumps in activity during the first and last months of the year, there is a slight, arcing curve that seems to crest around June before tapering off throughout the rest of the year. This aligns with our findings from last year.

However, despite this seemingly tidy trend line, the actual data is anything but tidy. Below, you’ll see the data for each of the six years we analyzed and averaged out: 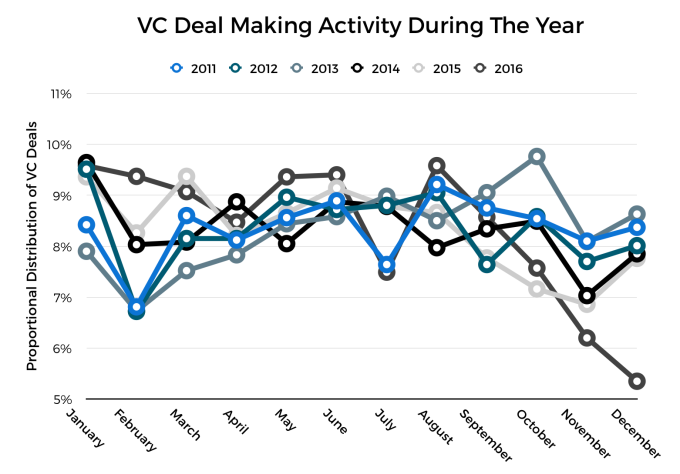 VC funds start at the beginning (of the year)

Although startups can successfully raise money throughout the year, the same can’t be said for venture capital funds. There is a yearly window during which the folks who start and lead VC funds — referred to as General Partners or GPs — seem to raise their funds.

VC funds seem to follow the advice of the King from Alice in Wonderland: “Begin at the beginning….” There appears to be a seasonal aspect to fund start dates — a plurality of which fall in the first quarter of the year.

Below, you’ll find a bar chart that aggregates 11 years of fundraising activity by VC funds in the U.S. 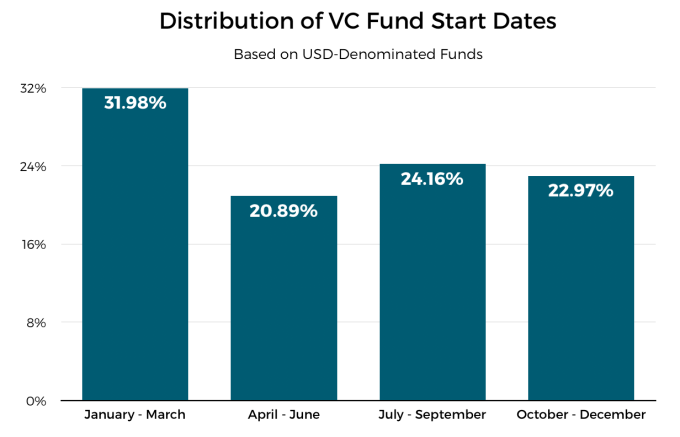 As you can see, a significant portion of venture funds start during the first quarter. However, despite the seemingly strong seasonal nature of GPs raising from LPs, there are plenty of funds started throughout the rest of the year.

Although this step removed a relatively small percentage of deals from our startup fundraising analysis, the noise-reduction effect for VC fund fundraising is more significant. Because VC firms tend to be relatively quiet about the launch of new funds, and regulatory filing requirements on new funds are relatively light, data covering the months and days on which funds were started is hard to come by. Often, only the year is known, and, in that case, Crunchbase defaults the listed start date to January 1 of the known year. (It’s also entirely possible that a large number of funds declare January 1 as their start date on regulatory filings, even if they closed out their fundraising activity on a different day.)

Regardless, this step removed some 371 funds putatively started on January 1st and a few hundred others declared to start on the first of other months throughout the year. This did not impact the quarterly percentage distribution of VC fund fundraising in a statistically significant way.

Why is some fundraising seasonal (or not)?

In general, VCs don’t appear to be any less likely to strike deals in the “dog days” of summer than any other time of the year, thus debunking the conventional wisdom of the “summer slowdown.” Sure, there’s a bit of a dip in July, on average, but that dip is neither sustained through subsequent months nor steeper than other month-to-month deviations from the norm.

If anything, our findings point to November as a particularly bad time for startups to raise from VCs because, like most others in the U.S., investors are occupied with more important things like seeing family and demolishing Thanksgiving leftovers.

But, again, these deviations from the mean (around 8.33 percent per month) aren’t that significant, meaning that the pace of dealmaking stays relatively stable throughout the year. This is likely because there is high competition for a relatively small number of good deals, and that competition promotes a kind of year-round vigilance that tempers any tendency toward seasonality in the industry.

What explains the comparatively more seasonal quality of VC fund fundraising is somewhat less clear. For many limited partners, venture capital is just another asset class, one that is, on average, a relatively small part of their broader portfolios. Given that governments (largely by way of pension funds) and institutions (university endowments, for example) make up a significant portion of the population of limited partners, it’s possible that these groups are subject to investment timelines and other mandates which tilt their investing activity to earlier in the year. But that’s just speculation at this point. It’s certainly a pattern that merits further investigation.

Again though, these findings show that U.S.-based founders of startups and venture firms alike shouldn’t shy away from fundraising, no matter the time of year. In most aspects of business, timing is crucial, and it’s also crucial when it comes to raising money. But startup founders, and to an extent venture capitalists, as well, shouldn’t time their raises by some arbitrary spot on the calendar or superstitions. Other factors matter far more than the date.

Charts are based on Crunchbase data for more than 43,600 venture capital deals struck between 2011 and 2016, with companies based in the United States. It is sector, stage and geographically agnostic. Due to a quirk in how Crunchbase assigns dates to deals, we removed all deals that occurred on the first of the month, which clears the deals for which the year, month and day aren’t known. Even though this removes a bit of statistical noise from the rounds data, we’ll explain in the next section why this data cleaning step becomes quite important.

* We’re using the “Announced On” dates listed in Crunchbase data, which occasionally lags due to normal market realities involving closing and announcement timelines.