ORII is a new smart ring that gives you full hands-free control of your smartphone. The device connects to your phone with Bluetooth and it can be used to provide crystal-clear audio, which makes it an interesting tool for those with sight or hearing issues.

It works using bone conduction technology so that, when wearing the ring, simply putting a finger to your ear will give clear and crisp playback of whatever is running on your phone. That could be a phone call, a music or video clip, etc.

Likewise, ORII enables a user to go completely hands-free with the device through the use of voice controls. The ring can be used to make calls, send messages, post to social media and more. It works directly with Siri and Google Assistant to give Android and iOS users full hands-free control of their device’s virtual assistant, while the companion app enables customized alerts via LED lights and vibrations.

The ring has been in development since 2015 and this week it launched on Kickstarter, where it costs upwards of $99. Already, the campaign has surpassed its $30,000 goal with 27 days remaining at the time of writing.

ORII is the brainchild of Kevin Wong, whose father has been visually impaired since he was a teenager. Wong told TechCrunch that he originally set out to develop a device that could help his father, and others like him, get more from their phone. In this current era of smartphone connectivity, Wong was worried that a lack of accessibility options put his father at a disadvantage.

Origami Labs, the company behind ORII, was founded by Wong (CEO) and three other MBA students from the Hong Kong University of Science and Technology. The team initially went through a range of different types of device in the quest for a solution, including a smartwatch and other wearable prototypes. Eventually they settled on the ring as a form factor, and the past year or so has been dedicated to packing the technology into the limited real estate for the product to work.

And it works. I’ve tried multiple close-to-finished versions and found the audio clarity to be excellent. I could hear a music clip clearly during a loud after-party at our TechCrunch China event in Shenzhen, for one, and it worked equally well at the very busy Rise tech event in Hong Kong this month.

Wong told me that already Origami Labs has sold commitments of devices to medical and care institutions. On the business-side, the company raised money from Alibaba’s Hong Kong entrepreneurship fund and Radiant Venture Capital, while it has relationships with China-based manufacturers. 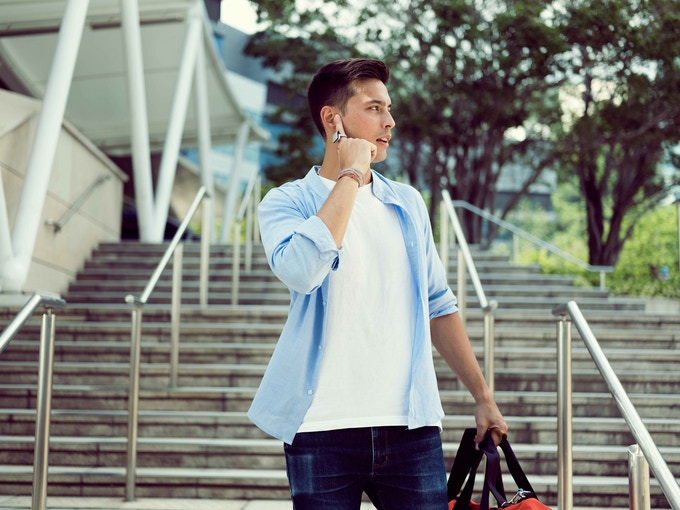 Beyond offering new accessibility options for the visually or hearing impaired, Origami Labs is aiming to build out a voice assistant platform that will be useful for anyone. Piggybacking on technologies like Siri and Google Assistant, Wong said he sees potential for the ring to act as a contextually aware prompt.

That’s to say that it could be capable of being triggered by a keyword and then acting on that to make an action. For example, asking if you want to book an Uber based on hearing the word “taxi.” The team is working to develop a solution that listens in passively, and not intrusively, so as to maximize battery life and protect user privacy.

The initial ORII rings don’t ship with that capability, but Origami Labs is working to ship an update that could be pushed over-the-air to all devices to equip them with the features. First of all though, the priority is to complete the Kickstarter campaign and ship all orders by February.