It announced a beta launch yesterday, and is offering teams a 30-day free trial — with pricing starting at €5 per user per month thereafter, or custom pricing for enterprise installations offering extras such as self-hosted servers and an integration API.

Co-founder Alan Duric tells TechCrunch that demand for the team messaging launch is being driven “primarily” by Wire’s existing user base.

“We found more and more that our consumer offering was being used by businesses, and so we were keen to launch a dedicated business product, with additional features tailored to their needs. These features are designed to facilitate collaboration between teams to enhance productivity safely and securely, and include screen sharing, group calls and file transfers. Wire now supports dual personal and business profiles, enabling users to switch between the two, and will soon allow users to off notifications for either account,” he notes.

“Demand was such that we onboarded 16 companies even before the beta launch… Prior to the beta launch, we conducted interviews with over 300 businesses to really understand their needs. In particular, the fact that we’re based in Europe, end-to-end encrypted, do not require users to share a phone number and are multi-device really resonated.”

Alex, a TC reader and Wire user who tipped us to the beta launch, is one of those existing users with an interest in the new team messaging feature — although he says his team won’t be signing up until the product exits beta.

Explaining how his team originally started using Wire, Alex says: “One of the team was traveling and visited China where we found the firewall was blocking basically everything. Skype would randomly keep crashing / lagging under a VPN, though Wire simply worked there. We decided just to stick with it.” 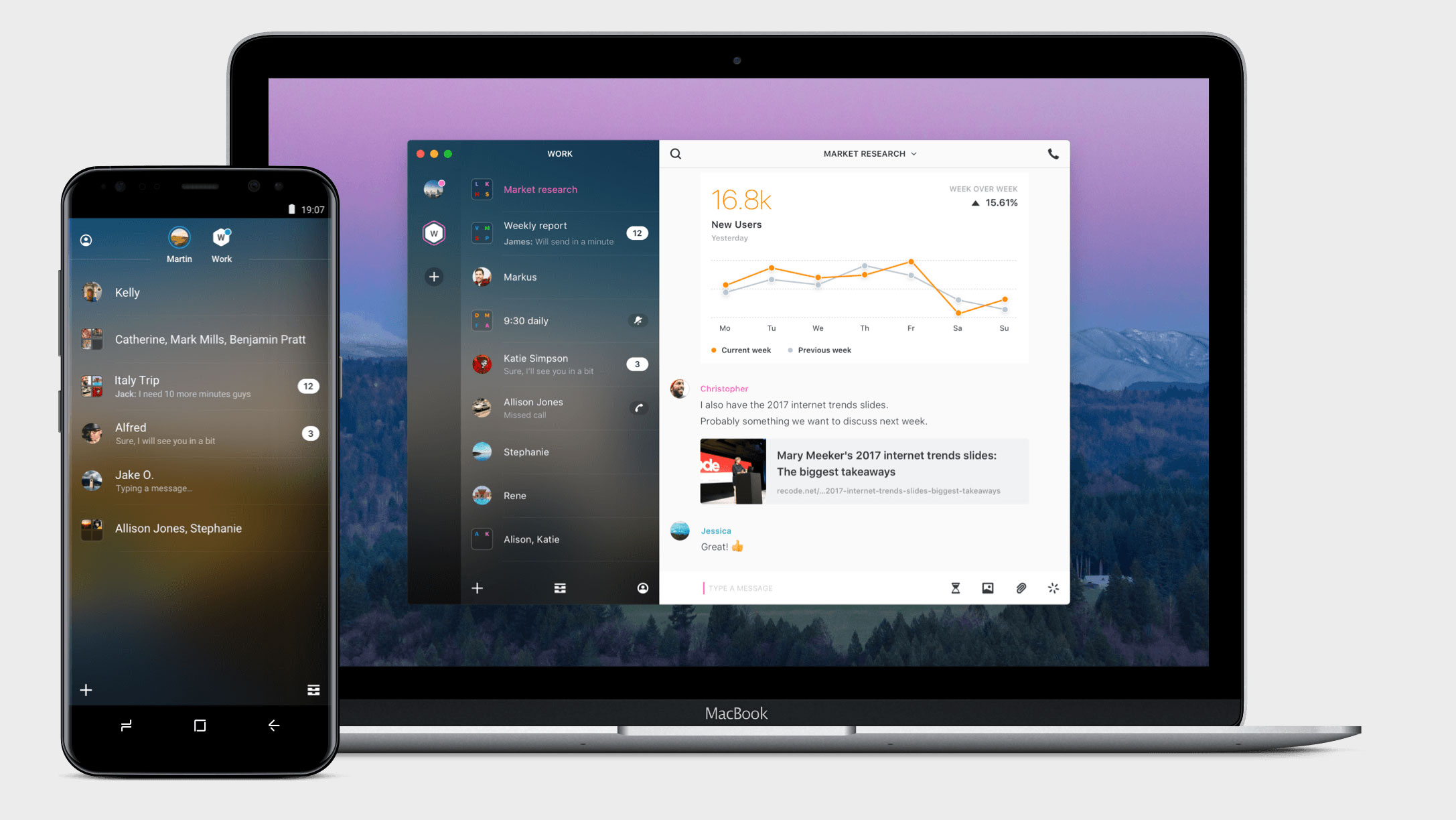 The Wire Teams product supports logging in with multiple accounts, so users can maintain a personal Wire messaging account separate from a Wire work account, for example.

There’s also support for adding guests to projects to allow for collaboration with outsiders who don’t have full Wire accounts of their own.

And, in future, Teams users will be able to switch off notifications for different accounts — so they could turn off work alerts for the weekend, for example.

“More and more businesses and international organizations have started using Wire for work since we launched end-to-end encryption. Teams make it easy to organize work groups and related conversations,” it writes in a blog post announcing the beta.

Duric adds that Wire currently expects Teams to be fully launched out of beta in late Q3/early Q4.

While the company started by offering a more general comms app, launched in late 2014 and backed by Skype co-founder Janus Friis, in recent years it’s shifted emphasis to focus on privacy — rolling out end-to-end encryption in March last year — perhaps calculating this makes for a better differentiator in the crowded messaging platform space.

When it comes to team messaging, services offering end-to-end encryption are certainly a relative rarity. Slack’s data request policy, for example, notes that it will turn over customer data “in response to valid and binding compulsory legal process”.

In its blog about Teams, Wire includes a comparison graphic across a range of team comms products and messaging apps, such as Slack, Skype for business, WhatsApp and Signal, which shows its commercial positioning and marketing at work.

As well as flagging as a plus its use of e2e encryption — which extends to securing features such as group calls, screen-sharing and file sharing — other differentiating advantages it’s claiming include its business having a European base (specifically it’s based in Switzerland, which has a legal regime that’s generally perceived as offering some of the most robust data protection and privacy laws in Europe); and its code being open sourced (unlike, for example, the Facebook-owned WhatsApp messaging platform).

Wire also suggests e2e encryption for team messaging could be a way for companies to ensure compliance with incoming European privacy legislation. The General Data Protection Regulation, which ramps up fines for data breaches, is due to come into force in May next year.

“Businesses affected by the EU’s upcoming GDPR rules benefit from end-to-end encryption, as it automatically protects the data they share with the team from third party access,” Wire claims.

Earlier this year the company published an external audit of its e2e encryption. This uncovered some flaws and issues but generally found the reviewed components to have a “high security”.

Although a third layer of security review — to consider Wire’s complete solution in the round — remained outstanding at that point.

At the time Wire published the audit it committed to ongoing security reviews of “every major development” of its product.

So — presumably — that should include one for the Teams addition when it launches.