Amazon’s Treasure Truck, the retailer’s deal programs that offers discounts on select items paid for online then picked up in person from an actual truck, is expanding across the U.S. First announced back in 2015 in Seattle, then rolled out the following year, Treasure Truck initially appeared to be some sort of one-off marketing experiment, but its recently granted patent and forthcoming nationwide launch now seem to indicate broader plans for Amazon’s attempt at crossing online and real-world shopping.

The company has not yet announced the city lineup for the Treasure Truck’s nationwide launch, but we understand the plan is to send a fleet of trucks to more than a couple dozen cities across the U.S, where it will exist as a permanent installation. That is to say, this is not a cross-country “road trip” for the deals machine, it’s actually meant to be a new way for consumers to interact with Amazon and shop. 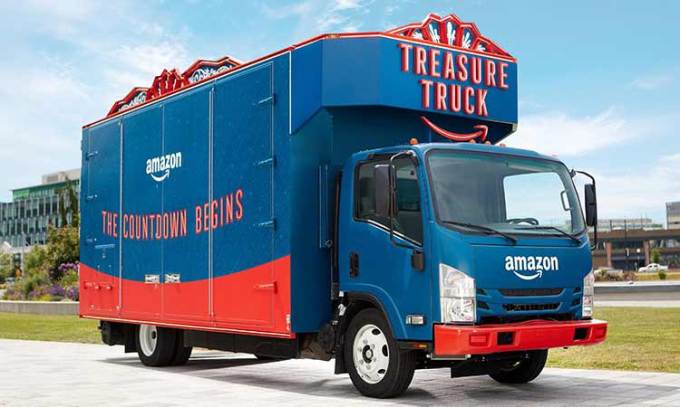 The goal with Treasure Truck so far has been to bring limited quantity items to customers in a unique format. In the past, this has included local, exclusive, and other in-demand products. For example, Treasure Truck served up deals on discounted GoPro cameras; the top holiday toy from Hatchimals; the new Harry Potter book, “Harry Potter and the Cursed Child;” Beast Mode-skinned Amazon Echo devices and Beast Mode hats, promoting Ex-Seahawks’ Marshawn Lynch’s Beast Mode apparel store, located in Seattle; and much more.

It has even given away candy, distributed Thanksgiving turkeys, porterhouse steaks, Lay’s chips, and free ice cream from Ben & Jerry’s, as well as hosted a Halloween pumpkin patch.

The Treasure Truck initially had a rough start, however. Shortly after Amazon announced the new deals program in 2015, it disappeared with no explanation beyond a tweet noting that there had been a delay with its rollout. It then resumed operations in Seattle seven months later, in 2016.

We are very sorry for the delay and are working hard to bring you treasure soon. #TreasureTruck

Amazon touts the truck as an innovative new way to shop, but the truck’s limited quantities bring to mind something like a real-world Woot!, the deals site acquired by Amazon in 2010. While there’s some advantage to bringing Amazon closer to customers – including those who don’t as regularly shop its site as its Prime members do – the Treasure Truck is also about creating buzz and excitement around the company. It’s a marketing program on wheels, so to speak.

Amazon earlier this year was granted a patent on Treasure Truck, which covers how the truck is designed with electronic lights and the marquee sign on top of the cab. At the time, a report from Geekwire also noted that Amazon’s job listings site referenced a plan for the truck’s expansion in an opening for a senior business development manager, whose job was to handle real estate development issues.

The Treasure Truck’s nationwide expansion is being rolled out in phases, we understand, and Amazon plans to announce more details on the deals program later this month.

In the meantime, customers interested in Treasure Truck can text “TRUCK” to 24193 in order to receive alerts about new offers or they can visit the Settings section in Amazon’s app, and switch on “Treasure Truck Offers” under “Notifications.”

Once Treasure Truck is available in your city, you’ll be able to shop the deals from the “Treasure Truck” section accessed via the “Programs and Features” menu item. When you find a deal you’re interested in, you tap “I want this,” and select your pickup location. You then have to visit the Truck’s location to pick up your item.