Amazon is today introducing a new feature called Amazon Pay Places, that allows customers to pay for in-store and order ahead shopping experiences using their Amazon app. That is, instead of using cash, check, credit or debit while shopping out in the real world, you can just use your Amazon account information. The first implementation of Pay Places involves a partnership with the TGI Fridays restaurant chain, but we understand this feature will be supported in more in-store and physical world applications in the future.

TGI Fridays, as the launch partner for Amazon Pay Places, is currently the only place where the feature can be used today. It’s also not broadly available across the restaurant’s chains in the U.S. Only Amazon customers in Boston, Philadelphia, Baltimore, Washington D.C., Richmond, Virginia, and Wilkes-Barre, Pennsylvania are able to take advantage of the feature at present.

To access Amazon Pay Places, you’ll need the Amazon mobile app. Once launched, tap on the drop-down menu to access the app’s navigation, then tap on “Programs & Features.”

Amazon Pay Places will be available in this section, in supported markets.

From there, you’ll be able to browse the TGI Fridays menu and place your order directly through the app. 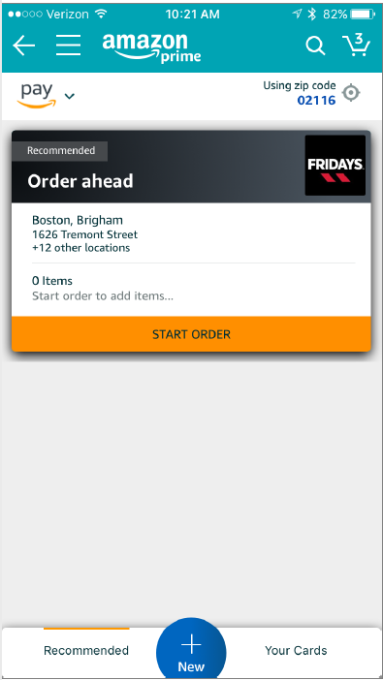 Using Amazon to pay for restaurant pick-up orders makes sense, as it simplifies the traditional means of placing a to-go order – calling a restaurant and providing your payment information over the phone, downloading a dedicated mobile app for the restaurant, or visiting the restaurant’s online ordering page.

But Amazon’s intentions are to take Amazon Pay Places beyond restaurants. It’s not hard to imagine a future where Amazon-owned Whole Foods used the feature for customer pick-up orders, for example.

Unlike with Amazon Restaurants, which reportedly has a fairly high check percentage split with Amazon on orders, according to the New York Post, Amazon Pay Places is a new addition to Amazon Pay.

Amazon Pay, largely, is Amazon’s own alternative to something like PayPal. That is, it gives online merchants the ability to add a button on their websites’ checkout pages that let shoppers pay via their Amazon account info. The idea there is that by doing so, customers are more likely not to abandon carts and checkout is sped up.

The retailer isn’t disclosing how many merchants are using its payments platform today, but in February it had announced that over 33 million customers have used Amazon Payments to make a purchase to date – a figure that was up 10 million from the 23 million it had in April 2016.

Though Amazon Pay is generally associated with e-commerce, Amazon has been slowly rolling it out to the real world, as well. For instance, Amazon last year partnered with luxury clothing merchant Moda Operandi, allowing in-store customers to pay for clothes they previously selected online using their Amazon account information.

Amazon Pay Places, then, represents the second use case for Amazon Pay out in the real world.

The retailer didn’t say when Amazon Pay Places would reach additional markets or showcase new partners, but that’s certainly an area worth watching.