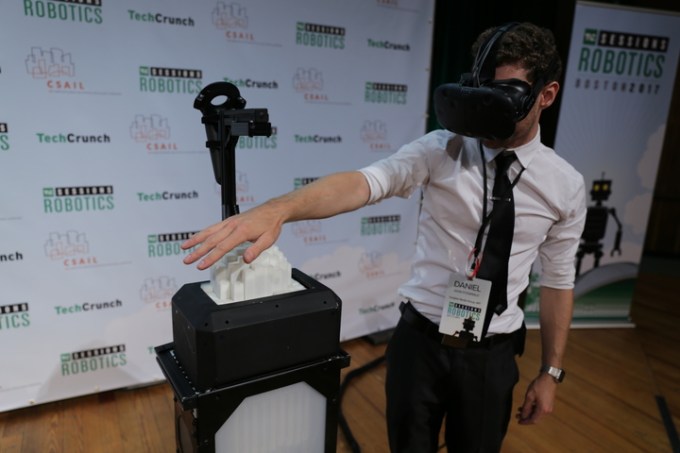 Touch. When it comes to virtual reality, it’s a problem no one has quite cracked. You can crank a VR headset’s resolution as high as you want and push the frame rate past what the human eye can see… but when the user reaches out and feels nothing but air, that sense of immersion is lost.

At TechCrunch Sessions: Robotics this afternoon, a researcher out of MIT demonstrated a portable “shape-display” — a wheeled robot that follows your hand, simulating the surface or object your VR-self is touching. He calls it the “ReVeal” system.

If it looks familiar, you might be remembering TRANSFORM, another project out of MIT’s Media Lab, and one from which this project gets some of its roots. It uses the same sort of shifting pin array, but whereas TRANSFORM was a large rig meant to stay in one place, ReVeal follows your hand around a room in the real world and simulates what’s beneath your hand in the VR/AR world accordingly. That mobility lets it simulate objects in a much bigger environment, instead of limiting it to a region a few feet wide.

Like all solutions for bringing touch into VR, ReVeal has its own limitations. For example, you can only increase the “resolution” (by bringing more pins into the same area) so much before the pins get small and, well, sharp.

Want one of your own? Alas, creator Daniel Fitzgerald tells me that it’s purely a research project at this point, with no plans for commercialization or deployment out of the lab.