Party City, the party goods supplier and retail chain, has taken a minority stake in digital invitations platform Punchbowl, the companies announced today. The deal will see Punchbowl’s technology used to power an online invitation platform on Party City’s e-commerce site, opening up Punchbowl to an influx of new customers.

While the official announcement didn’t disclose the size of the round, an SEC filing listing Party City Retail Group president Ryan Vero points to an infusion of an additional $4 million. Vero has also joined the board as a result of the deal, meaning Party City will be working more closely with Punchbowl going forward.

According to Punchbowl CEO Matt Douglas, Party City’s investment and commercial partnership was only one of the options on the table for his company. 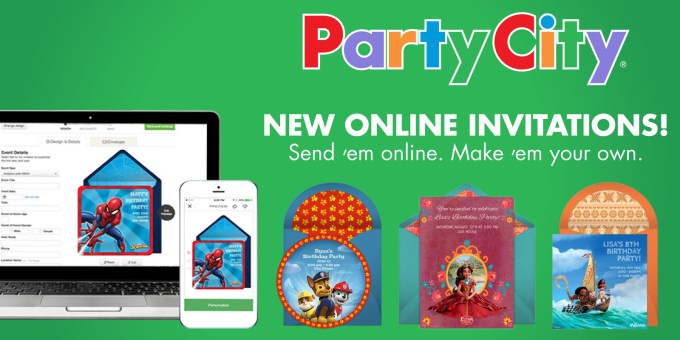 Starting in mid-2016, Punchbowl began to see a lot of inbound interest, leading to what he described as “several alternatives” that the company could have pursued. But Douglas, not looking to sell, saw the potential in working with the large party supply retailer as a means of growing Punchbowl’s own business.

Party City sees around $2.3 billion in annual revenue and operates some 900 retail locations – which is how most consumers know of the business today. But Party City is also a vertically integrated company, meaning they’re often the manufacturer of party goods sold in other party stores, too. Meanwhile, its e-commerce business accounts for around 10 percent of the company’s retail revenue today.

Punchbowl, on the other hand, never focused on physical goods. Founded in early 2007, the service is one of the early competitors in the digital invites and e-cards space, and a rival to others like Evite.

The company, which now sees tens of millions of customers per year, had bet on the demise of paper cards for things like party invitations and greeting cards. It translated the paper card format to digital – including with virtual envelopes that opened to reveal your card, and even an option for including digital gift cards inside its online cards.

Douglas admits Punchbowl’s growth has been a slow climb. “We’re not a rocket ship,” he says. “We’ve been really slow and steady,” he notes, adding that “we’ve been profitable for several years now.”

In other words, Punchbowl wasn’t in need of investment, but rather chose to work with Party City as more of a strategic business decision.

“These guys are smart, they get it, and they really respect our expertise in [the area of digital cards.],” Douglas noted, as to why he decided to work with Party City, despite the longer path to launch due to it being a publicly traded company. (The two companies had first started talking a couple of years ago, he said.) 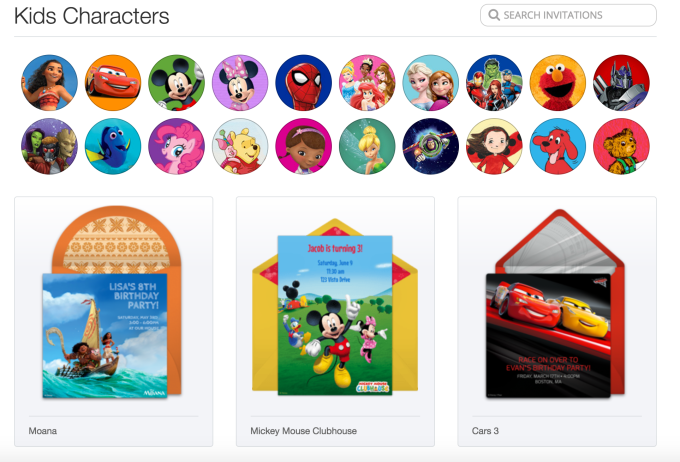 The Party City deal focuses only on Punchbowl’s online invitations business for now, but may expand to other cards in the future. The ability to add Punchbowl cards to your order for just a few dollars is marketed on the website, and will be promoted in retail stores, too, at a later point.

Punchbowl has done other platform integrations like this over the years, not all of which have lasted. Douglas can’t detail those due to the nature of the deals, but notes that it had worked with the Oriental Trading Company, TIME, RealSimple, and it powered the backend of an unnamed service for selling parties.

Along with the Party City deal, Punchbowl also today announced a new deal with Disney-owned Marvel, which will allow it to offer the only digital collection of invites featuring Marvel characters. The company previously disclosed a partnership with Disney back in 2014, which included Disney artwork for Punchbowl’s invites. (That deal has been renewed for several more years.)

But Marvel’s deal is not an expansion on the earlier Disney deal – the Marvel organization is a separate entity, involving a separate contract and team.

The Marvel collection – which includes characters from Spider-Man, The Avengers, and Guardians of the Galaxy – is live now, as is the Party City integration.

Punchbowl had raised $5.8 million in previous investments, according to Crunchbase.