On the heels of launching its next-gen DVR for cord cutters who want to record TV over-the-air from a digital antenna, the maker of the Tablo DVR is today releasing a new app for Android TV owners, for recording live TV without the need for additional DVR hardware. The app, Tablo Engine, initially works with the Nvidia Shield.

Of course, you’ll still need an HDTV antenna in order to capture the free, over-the-air TV signals. To connect your antenna to your Nvidia Shield, you can grab the Tablo dual-tuner USB adapter from the company’s website for $69.99. (You can also use the or the Hauppauge WinTV-dualHD USB tuner stick, if you prefer.)

But you don’t need to have anything beyond your Nvidia Shield in order to start recording from live TV.

After everything is set up and connected, you’re then able to use your Nvidia Shield like a Tablo DVR via the new Android TV app, Tablo Engine.

The app lets you take advantage of the Shield’s existing internal storage space (on Pro home media server models) to save the DVR recordings, eliminating the need for a separate device. The recordings are saved in MPEG2 format, and can be paused, rewound, and fast-forwarded through both when complete and while they’re still in progress.

But, if you do find that you need more storage, there’s still an option to add on a separate USB-connected hard drive on either the 16 GB streaming media device Shield models, or on the Pro models, when using the optional expanded storage. 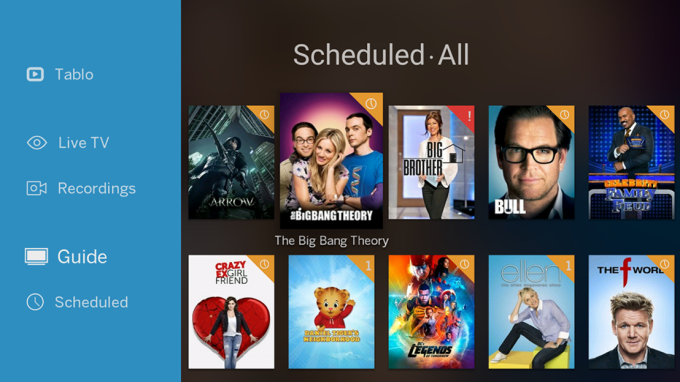 In addition to recording TV over-the-air, you can watch live TV in HD, while also pausing and rewinding the content. A channel grid will also display what’s currently on as well as the programming for the next two weeks ahead. Through Tablo Engine’s program guide, you can set to record shows, opting to capture either all episodes or new episodes only – much like you can with Tablo’s existing DVR and software solution.

While the new Tablo Engine app for Android TV is a free download, access to the full TV guide data costs $3.99 per month, or $39.99 per year. Without the subscription, you’ll only have 24 hours of guide data available.

However, those who purchase a Tablo tuner adapter get the first 6 months of guide data for free.

There’s also a web app available at my.tablotv.com that will let you adjust Tablo’s settings and manage your recordings while you’re on the same local network as your Android TV.

Tablo isn’t the first company to leverage the Nvidia Shield as an option for watching and recording from live TV. Plex has also been moving into this space, allowing users to turn their Nvidia Shield devices into Plex media servers, including Plex’s support for live TV and DVR functionality.

Because of Nvidia Shield’s high-end specs, it works well for services like this, but Tablo’s maker says that it’s looking into workarounds – like the use of USB hubs, for example – that would allow it to bring the Android TV app to more devices.

The Tablo Engine app is live now, on the Google Play store.