Imagine a future where you go into a grocery store to buy some fresh basil, and, as you traverse the aisle, instead of polythene bags containing mass-produced snippets of the herb that have been flown in from thousands of miles away, in front of you are a stack of illuminated containers, each housing a mini basil farm.

The plants themselves are being monitored by multiple sensors and fed by an internet-controlled irrigation and nutrition system. Growing out from the centre, the basil is at ascending stages of its life, with the most outer positioned leaves ready for you, the customer, to harvest.

Now imagine no more, because, to paraphrase science fiction writer William Gibson, the farm of the future is already here, it’s just not evenly distributed.

When we presented our idea three or four years ago, people looked at us and thought we [had] lost our mind Infarm co-founder Erez Galonska

Infarm, a 40-plus person startup based in Berlin is developing an “indoor vertical farming” system capable of growing anything from herbs, lettuce and other vegetables, and even fruit. The concept might not be entirely new — Japan has been an early pioneer in vertical farming, where the lack of space for farming and very high demand from a large population has encouraged innovation — but what potentially sets Infarm apart, including from other startups, is the modular approach and go-to-market strategy it is taking.

This means that the company can do vertical farming on a small but infinitely expandable scale, and is seeing Infarm place farms not in offsite warehouses but in customer-facing city locations, such as grocery stores, restaurants, shopping malls, and schools, enabling the end-customer to actually pick the produce themselves.

“When we presented our idea three or four years ago, people looked at us as though we [had] lost our mind,” says Infarm co-founder Erez Galonska. “We are the first company in the world that has put vertical farming in a supermarket. We did it last year with Metro Group, which is one of the biggest wholesalers in Europe, and now we are facing very big demand from other supermarkets that want to do the same”.

Each farming unit is its own individual ecosystem, creating the exact environment our plants need to flourish Infarm co-founder Osnat Michaeli

That demand — which has also seen Infarm recently partner with EDEKA, Germany’s largest supermarket corporation — is driven by a change in consumer behaviour in which “people are seeking more fresh produce, more sustainable produce,” says Osnat Michaeli, another of Infarm’s three founders (the other is Guy Galonska, brother to Erez). More generally, she says, the food industry is looking to technology that can help solve inefficiencies in the supply chain and reduce waste.

“Our eating habits have created a demand for produce that is available 365 days a year, even though some varieties may only be seasonal and/or produced on the other side of the globe… The food that does survive the long journey is not fresh, lacks vital nutrients, and in most cases is covered in pesticides and herbicides”.

In contrast, the Infarm system is chemical pesticide-free and can prioritise food grown for taste, colour and nutritional value rather than shelf life or its ability to sustain mass production. Its indoor nature means it isn’t restricted to seasonality either and by completely eliminating the distance between farmer and consumer, food doesn’t get much fresher.

“Behind our farms is a robust hardware and software platform for precision farming,” explains Michaeli. “Each farming unit is its own individual ecosystem, creating the exact environment our plants need to flourish. We are able to develop growing recipes that tailor the light spectrums, temperature, pH, and nutrients to ensure the maximum natural expression of each plant in terms of flavor, colour, and nutritional quality. Weather that be an arugula from Provence, Mexican tarragon or Moroccan mint”.

The Infarm vertical farming system has been designed to enable a “perpetual daily harvest”. Taking inspiration from the petal  constellation of the sunflower, the growing trays move plants from the centre to the outer perimeter according to their size and growth. Replenishing the plant food is as simple as changing a cartridge and water supply can also be automated. 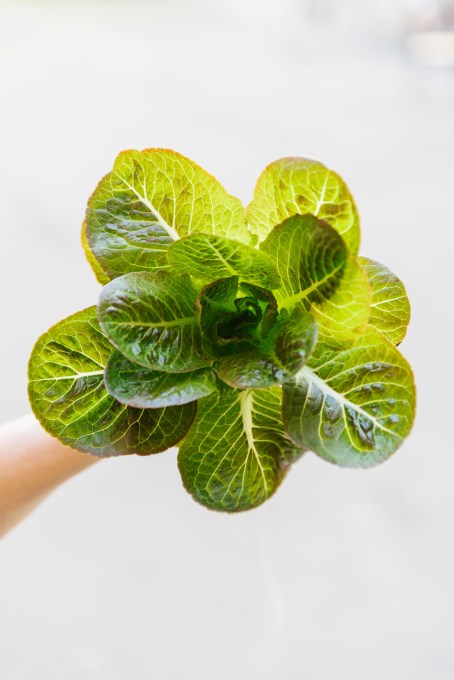 In addition, a matrix of sensors collect and record data from each farm so that Infarm’s plant experts and tech team can remotely monitor crops and optimise the plants’ growth in real-time or troubleshoot any peculiarities, such as a change in atmosphere.

“The system is smart. It can guide you where to harvest and can notify you when the produce needs to be harvested, and this is your part in the game,” says Galonska. “Machine learning can help us understand and predict future problems”.

When a new type of herb or plant is introduced, Infarm’s plant experts and engineers create a recipe or algorithm for the produce type, factoring in nutrition, humidity, temperature, light intensity and spectrum, which is different from system to system depending on what is grown.

The resulting combination of IoT, Big Data and cloud analytics is akin to “Farming-as-a-Service,” whilst , space permitting, Infarm’s modular approach affords the ability to keep adding more farming capacity in a not entirely dissimilar way to how cloud computing can be ramped up at the push of a button.

This makes Infarm potentially scalable, both in terms of biodiversity and supply: from a small number of units in-store, where customers can get up close to the produce, to additional capacity at the back of a supermarket, to a large online retailer that may require 1000s of units and grow 100s of varieties.

None of which has gone unnoticed by investors. Christian Meermann, Founding Partner at Cherry Ventures, says the distributed nature of Infarm’s system is one of the things that made the startup stand out from other vertical farming companies the VC firm looked at. This, he says, is seeing Infarm create a network of farms that are centrally controlled and monitored from the cloud and do not require the startup to build huge farming warehouses of its own.

Meermann also talked up the machine learning behind Infarm, which he says is enabling it to figure out the most optimum recipe for different plant types to not only significantly enhance flavour but also let crops grow in parts of the world they otherwise wouldn’t be able to.

“When we started out, we were looked at as ‘idealistic dreamers’. In part, this might have been because we were self-taught and not many believed that we had the necessary expertise needed to invent a new agricultural solution,” adds Michaeli.

“The challenge [now] is in finding the right partners. Our initial focus is on supermarket chains, online food retailers, wholesalers, hotels, and other food-related businesses, for whom the superior quality and range of produce — with no fluctuation in costs — makes Infarm an attractive partner. In return, we can reintroduce the joy of growing to the urban population”.