Amazon today announced a notable new trick for its next-generation Echo device, the Echo Show (aka the one with the screen), which could make it a more compelling purchase: it will be able to display the live streams from a number of smart home cameras. Already, companies like Ring, Arlo, Nest, August, EZViz, Vivint, Amcrest, Logitech Circle 2, and IC Realtime have created Alexa Skills that will use the new functionality, Amazon says.

In addition, Amazon is introducing a Smart Home Skill API that will allow developers to integrate live video feeds from their smart home cameras with the device.

The Echo Show, announced in May, is due to begin shipping next week.

The $230 Wi-Fi enabled device offers the same features found in Amazon’s smart speaker Echo – like the ability to talk to Alexa, play music, listen to news and weather, and more. But because it also includes a seven-inch screen, it enables a number of new uses as well, like being able to make video calls, see the lyrics to your songs as they play, watch video flash briefings and YouTube, along with other things that leverage the device’s screen.

One of those promised use cases was the ability to watch your smart home’s cameras, Amazon had said. 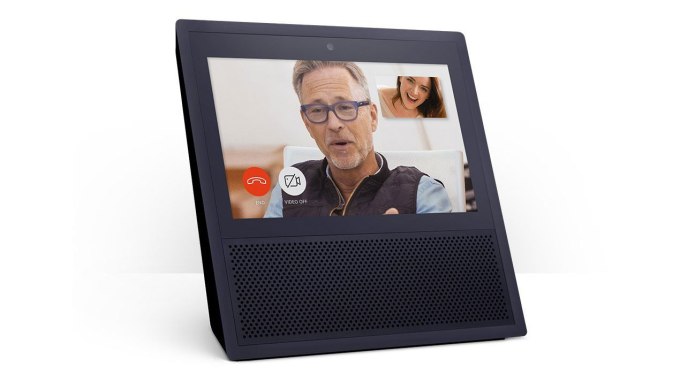 Several smart home vendors are today introducing how their particular Alexa Skill will work when the Echo ships. For example, security camera and video doorbell maker Ring says its new Skill will allow customers to say, “Alexa, show me the front door,” in order to see and hear the visitor right on the Echo Show’s screen.

“Traditionally, our user experience involved customers taking out their phones and opening the app to see their video feeds,” says Darrell Sommerlatt, Software Engineer at Ring. “With Echo Show, we saw that we could enable customers to connect to their feeds via voice,” he says.

What the company liked about building for Alexa is that it didn’t need to worry with how to handle natural language processing – Amazon’s Smart Home Skill API took care of it.

Similarly, smart lock maker August says that Alexa will now be able to talk to its August Doorbell Cam. By saying, “Alexa, show me the front door,” its customers can quickly see a live video feed of any visitors or motion outside the door, as well.

And Arlo by Netgear, which makes a line of wireless, weatherproof smart security cameras, notes that the new integrations can be used to see inside your house, too. Many of its customers, for example, use its cameras as baby monitors. With Echo Show, parents could ask Alexa for a feed of a particular room in their house to see it displayed on the Echo Show.

One statement that all the vendors made when announcing their own integrations today was how much better an experience this was for customers using their products, compared with having to pull out your smartphone. It’s true – mobile devices aren’t an ideal way to interact with smart home cameras. Unlocking the phone and fiddling around with apps just isn’t as simple as speaking out loud. (Plus, there’s a bit of sci-fi fun to be had, given that you can address Alexa as “Computer,…” if you choose.)

Meanwhile, though it’s nice that there smart home device apps that run on smart TVs and streaming media players like Fire TV, Apple TV and others, those are only convenient if you’re not actually trying to watch TV at the time of use.

A dedicated voice-enabled screen like the Echo Show makes more sense, and – more importantly for Amazon – it presents a practical use case for the device which may otherwise seem like more of a “nice to have” luxury, but not one that added enough value to be worth the price.

In addition to working to display video on the Echo Show, the new Smart Home API will also be able to interact with Amazon’s screen-less speakers like the Echo or Echo Dot. In those cases, you can listen to audio from the camera feed instead. This support will be added soon, but is not available at launch, Amazon says.