In attempt to woo customers away from competitors, Virgin Mobile USA today announced a deal that will see it transitioning to become an iPhone-only carrier. The company is also partnering with Apple to activate Virgin’s services in Apple’s stores. To kick off this change, Virgin introduced a limited time promotion that will see it giving away a year’s worth of unlimited talk, text and data for only a dollar.

There are a few caveats to this deal, of course.

Like most carriers, unlimited data is not exactly that. Customers who use more than 23 GB of data during one billing cycle will be deprioritized, Virgin says – meaning it will throttle your bandwidth as needed, especially in places where there’s a lot of congestion.

Plus, Virgin’s terms says it has the right to terminate your service is your off-network roaming usage exceeds either 800 voice minutes or 100 megabytes. (The plans come with 800 domestic voice roaming minutes and 100MB domestic data roaming, in addition to the unlimited data, talk and text).

Oh, and you’ll need to purchase an iPhone from Apple or Virgin, of course, then port your phone number over to Virgin’s Inner Circle plan.

Virgin is carrying the iPhone SE, 6, 6s, 6s Plus, 7 and 7 Plus on its website, in various configurations, at retail price, for the most part. The exceptions to that are the SE 32 GB and 128 GB model, which are discounted compared with Apple’s direct price. And the iPhone 6 32 GB is discontinued, so it’s also a cheaper pick.

While the $1 deal sounds like it’s too good to be true, there’s a bit of a catch with that, as well.

The deal is only being made available until July 31st, 2017; afterwards it’s a 6-month offer. In other words, this is a big carrot being dangled to attract a slew of new sign-ups at once. Virgin is essentially betting on the fact that customers will stick around when the regular plan pricing of $50 per month (which requires AutoPay) later kicks in.

There are also some optional add-ons for international calls, packaged into a $5 or $10 bundle, depending on your needs. These are focused on offering unlimited calls to select countries or landlines, unlimited texts, and other reduced rates. (The full details on those are here.)

Despite these caveats (another, arguably, could be that Virgin runs on Sprint’s network, which has its own set of challenges), Virgin’s Inner Circle comes with a series of perks, too. These are focused on tying the carrier to the larger set of Virgin brands, like its airline, hotel chain, and wines, for example. 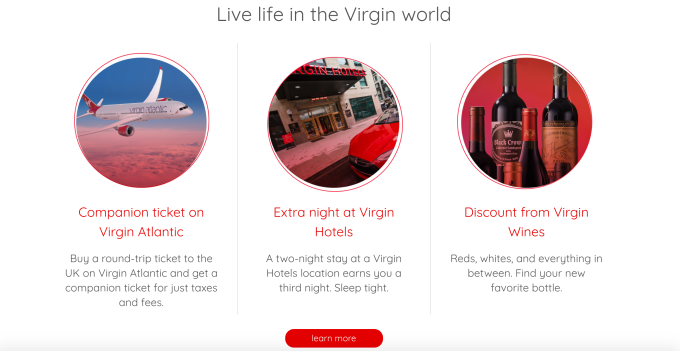 With Inner Circle, customers can buy a round-trip ticket to the U.K. on Virgin Atlantic and only pay fees and taxes on a second companion ticket, as well as take 20 percent off flights on Virgin America. You can get your third night free when staying at Virgin Hotels, and enjoy discounts on Virgin Wines and the Virgin Sport San Francisco Festival of Fitness in October. There will also be chances to win “bucket-list experiences” with Virgin Racing, Virgin Galactic and others, the company notes.

Carriers are always battling for customers and offering an ever-growing collection of outlandish promotions to win their business. Virgin Mobile’s parent company Sprint, for example, just this month began offering a free year of unlimited service to those who switch from another mobile operator.

While the promotion itself will eventually pass, Virgin’s larger business decision to stick only to iPhones is worth noting here. This is something Sprint’s CEO Marcelo Claure alluded to last year, when he said that Virgin was going to be de-emphasized ahead of a forthcoming shift in strategy.

Well, now it’s here. Before, Virgin had been an Android prepaid business sold through national retail stores. Going forward, it will instead tout its contract-free, iPhone-only model.

The partnership with Apple allows Virgin Mobile to become the newest carrier to sell its service in Apple’s stores, and makes it the first iPhone-only carrier in the U.S.

The company believes the change may give it a renewed shot at competing with its better performing rivals, like T-Mobile’s MetroPCS and AT&T’s Cricket Wireless, as well as non-traditional newcomers, like Google’s low-cost Project Fi.

“Virgin has always looked to shake things up and challenge the status quo in any sector we go into,” said Virgin Group founder Richard Branson, in a statement. “Mobile is no exception and with Virgin Mobile USA, we’ve now worked with Apple to create a compelling offer for our new Inner Circle plan. Simply put, when you buy an iPhone you will get the highest quality device and service plus access to an array of Virgin experiences and offers with our group of companies,” he added.

Virgin is officially announcing the news via its Facebook Page today:

We’re Live With Sir Richard Branson for a Big Announcement

We can’t tell you what it is in this post because it would ruin the surprise. But it’s probably something about changing an entire industry forever. NBD.#InnerCircleLife #VirginMobile