In April we reported that Justin.tv founder and Y Combinator alum Justin Kan had assembled a team to “disrupt the legal industry” and was raising $10 million to do so. This week Kan confirmed that the company has completed its fundraising process, raising $10.5 million in what ended up being one of the biggest “party rounds” I’ve ever seen.

Earlier this week I met with Kan to discuss Atrium LTS — the “LTS” stands for “Legal Technology Services” — and the company’s plans. And while Kan is still loathe to go into all the details, citing some regulatory issues still being ironed out, he could provide some high-level perspective into where he believes Atrium can apply technology to the legal industry.

As a “power user” of legal services over a decade in the startup industry, through the foundation and fundraising of startups like Justin.tv as well as the work he’s done as an investor and advisor to companies through Y Combinator, Kan says he was frustrated by how little technology was being used in the process of interacting with various law firms.

“Why don’t law firms use project management software to track where they are in the process of completing a deal and let customers see that?” Kan asked. But more important than the way in which law firms interact with customers, Kan sees an opportunity to streamline the work that is done in-house to make it more manageable for lawyers and those who work at law firms.

Now onto the funding… As we reported, the round was led by General Catalyst, but what we didn’t know at that time is that the financing includes nearly 100 institutional and angel investors who came along for the ride.

You get all that?

Ok, so the question is, why would Atrium LTS bother raising money from so many different stakeholders? Why not just get a few large checks from a few notable investors, instead of lots of small checks from a bunch of VCs and angels? 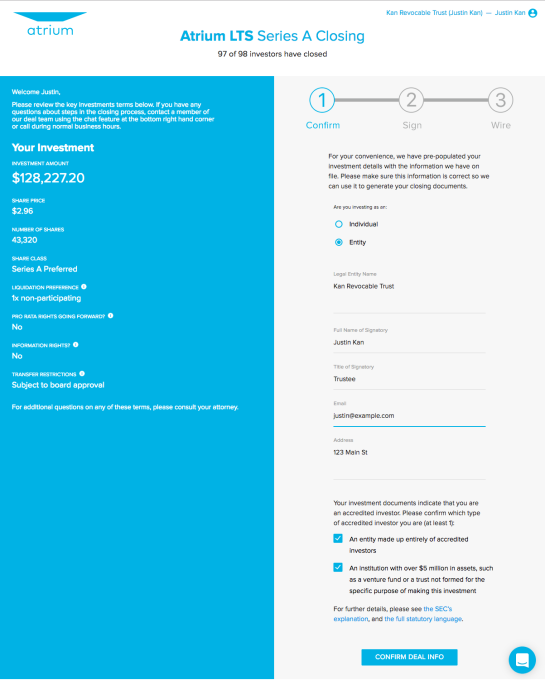 “We’re building software to improve the delivery of legal work for these people,” Kan told me. As a result, it makes sense to get a certain amount of buy-in from the industry. It’s not just about the capital, but about getting a funnel of companies and individuals that could be potential customers as Atrium goes through its product development phase and tries to achieve product-market fit.

As one example of how the company is already working to solve their problems, Kan sent along the screenshot to the right, ostensibly showing how it used its own tools as part of the fundraising process… and by extension, how other entrepreneurs and investors could use those tools in the future.

Kan promises more to come — including more details about the tech the company is building and how it will begin offering that technology to customers — but in the meantime, you’ll probably just have to imagine all the reasons you hate your law firm and what you think they can do better, and take comfort in knowing that Justin is working to fix it.