Ads aren’t enough to support professional online content makers. So Patreon is equipping them with new ways to organize, measure, and entertain fans who use its platform to pay them a monthly subscription fee for special access.

With 1 million patrons paying an average of $12 per month to 50,000 creators, Patreon is on track to send musicians, comedians, journalists, videographers, and other content makers $150 million this year. Today’s updates could push that figure even higher, while redefining the economics of art.

For more on how Patreon doubled in size in a year, read our deep dive from last month.

“Over the last 15 years, distribution has been democratized and pretty much solved” says Patreon CEO Jack Conte. “Unfortunately in that process, global financing for the arts has gotten into jeopardy.  It’s so important not just to the creators but to the people who like art, that we fix the financial foundation.” 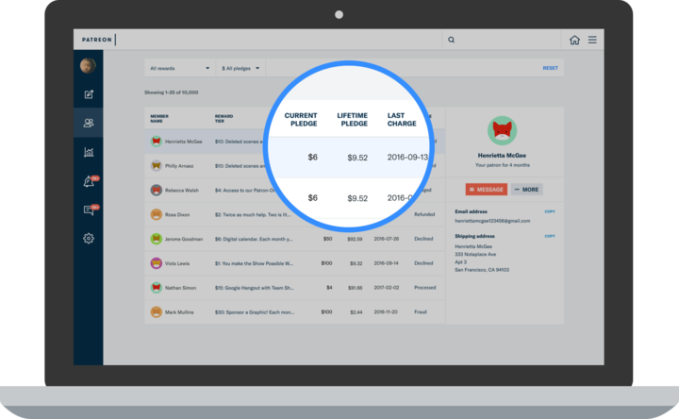 The new “Patreon Membership Engine” centers around the Patron Relationship Manger, the first CRM for pro content creators. It lets them sort patrons by how much they’ve paid or when they joined, and provides their email addresses — something YouTube, Facebook, Instagram, Snapchat, Twitter, and other platforms refuse to give creators.

This Salesforce-For-Artists lets them contact their fans with special offers or thank yous, like hawking higher priced merchandise to top spenders while upselling new $1 subscribers to their more expensive reward tiers. Spam isn’t too much of an problem since Conte says “There’s no reason to abuse the people who give you your monthly pay check.”

There’s also a slew of new content creation tools.  The new Early Access feature lets creators post content just to fans who pay over a certain dollar amount per month, and set a ‘window’ before its publicly available on their Patreon. A partnership with Crowdcast lets creators log in with their Patreon account and broadcast livestreams just for paying fans, while Patreon foots the bandwidth bill. 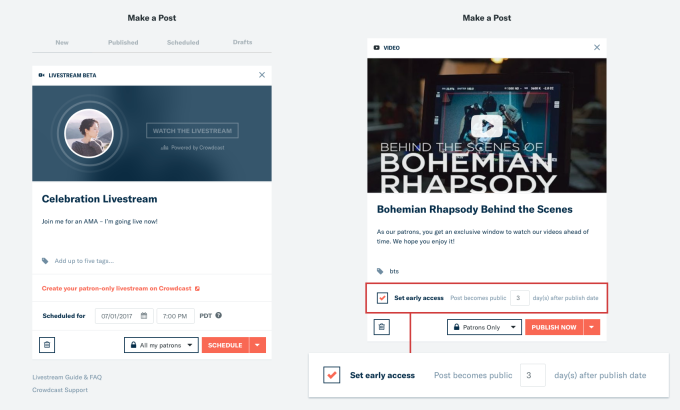 But most exciting and disruptive is Patreon Lens, a stripped-down Snapchat Stories clone where creators can share peeks into their lives and behind-the-scenes that are exclusively available to their paid subscribers. Instead of giving away their off-the-cuff content on Snapchat and Instagram, creators can actually earn money from their social media via Patreon Lens.

You can follow all the creators you subscribe to through Patreon on Lens, who see how much they earn per month by the total viewership of their Stories. Unfortunately, the app only allows photo and video capture and uploads with no fancy drawing, stickers, filters, or augmented reality masks. But Patreon will keep embellishing it, with captions coming soon. 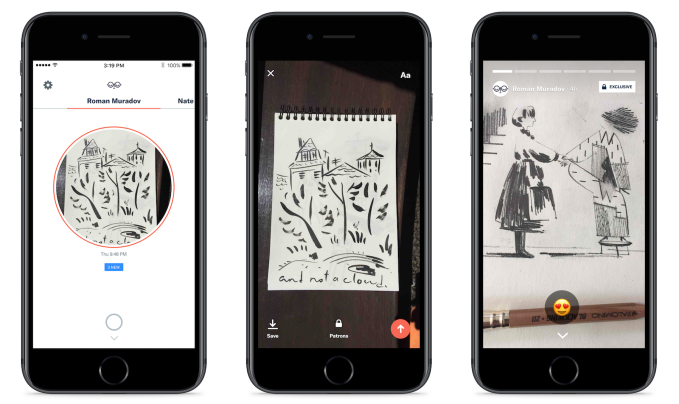 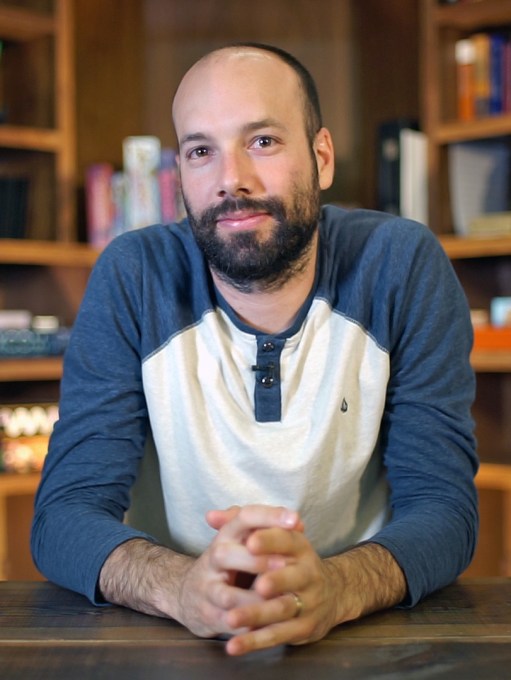 With these new tools, Patreon could shift the online content ecosystem from one where creators give away what they make in hopes of tiny ad revenue shares today and big merchandise or ticket purchases in the future, and towards allowing creators to earn a reliable salary.

There’s still the question of whether Patreon can make enough money for itself off its tiny 5% rake on subscriber payments. Patreon will earn just $7.5 million from the $150 million it expects to pay creators this year. That’s why the plan is to layer on additional premium services for creators, Conte tells me, hinting at partnerships to sell merchandise or concert tickets through Patreon.

Really, all Patreon has to do is keep luring creators with the promise of steady paycheck, and their fans will follow. “Art is one of those few legal monopolies” Conte philosophizes. “If you want to listen to Prince, Mick Jagger doesn’t do. Nothing else in the world can satisfy that urge. It’s not replaceable, it’s not hot swappable. It’s not a commodity.”