If you want to re-imagine cities, you’ll likely work with city government. Sometimes this means city governments will your customer, but far more often founders will encounter an unfamiliar relationship that includes policy, regulations and enforcement.

There are great resources to guide founders through all aspects of customer discovery, but there aren’t yet great frameworks for thinking about city governments. Or so we thought, until we realized that some great research might be repurposed to help founders understand how to work with organizations that are representing public interests.

Local governments have substantial influence over how cities are built and how they operate. But this power takes different forms. For example, although most city governments own buildings, they’re usually just one of a number of larger real estate owners in a city. Would it make sense to begin selling building energy services exclusively to local governments? Probably not. This would mean having to navigate city procurement and you’d miss large segments of the market. Building a sales organization focused on government sales requires different skills and relationships versus the type of organization you might build to sell into private real estate owners.

This doesn’t mean you can ignore city government’s role in building retrofits. A growing number of cities have set policies that already (or will soon) require changes to buildings, such as Palo Alto’s Net Zero Energy Initiative. They’re doing this as part of increasingly aggressive goals to get to zero emissions for their communities. So while city government might not be your first customer, it is worthwhile to understand which cities are further along in their policy agendas. And how these policy agendas might support local sales strategies.

It’s not just policy than can helpful. There might be a mayor who has articulated a strong interest in a subject like building retrofits, for example. In this case, even without strong policy or regulatory control, a city government is likely to be a great ally in connecting with potential partners and customers.

C40 is a network of the world’s megacities committed to addressing climate change. They create research to be shared between members with a goal of helping them meet their climate action goals.

C40 cities have a specific interest in understand how city mayors can use their power to drive climate action. They surveyed their members and asked them about their roles in owning or operating certain assets or their ability to create and enforce regulations. Responses from cities detailed their control over assets and activities from buildings to cycling.<

It’s important to remember that these questions were tailored to assets that C40 believes are relevant to climate change, but it still gives a good sense of the wide range of powers that cities have via ownership and operation. 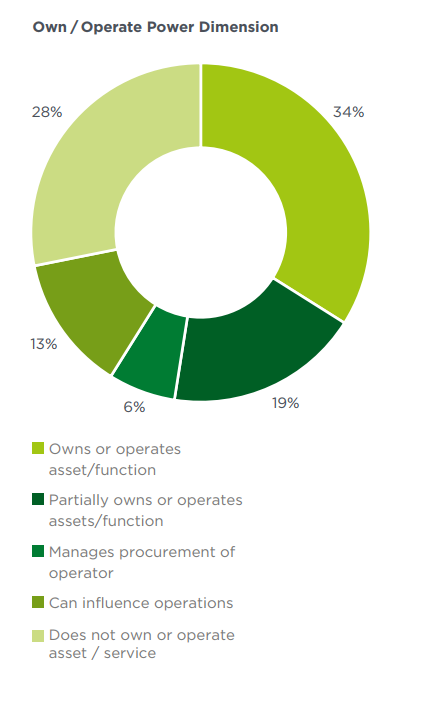 You can see why a city government might not be the end customer in many scenarios. In a large number of cases, mayors simply don’t own or operate relevant assets. In other cases, the answers is less clear – startups might start off focused focused on B2G, but then find themselves focused on B2B.

AirBnB, Lyft and Uber are the first generation of startups whose work with governments has become just as important as their work with customers. In fact, Uber’s lawsuits with local governments around the world is a great map of the many ways in which local policy and enforcement can impact a startup. When you look at the C40 analysis, you can see why. Over 80% of the time, mayors responded that they can set or influence policy and enforcement. 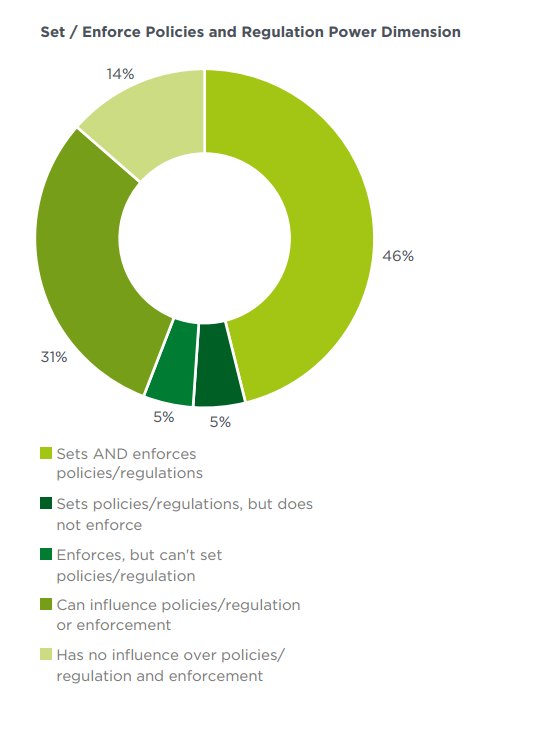 Partnering with city government isn’t like business partnerships. It starts simply with understanding what is likely to make local governments care about your issue. Governments are likely to react to two major groups. First, your customers. If you do something customers like, they’ll likely be supportive. This doesn’t mean they’ll ignore smaller groups of business interests, especially if those groups can show how their failure would have negative consequences for citizens like lost employment opportunities.

C40 produced a range of power maps, showing the relative power of local government over activities and assets like sidewalks, airports, cycling, water, power distribution. As the example shows below, the larger the area, the more control local governments have. Or put another way, when the area is larger, governments are mostly likely to be your customer or at least have a major impact via policy, regulations or enforcement. The smaller the areas are, the less relevant local governments will be to your business. 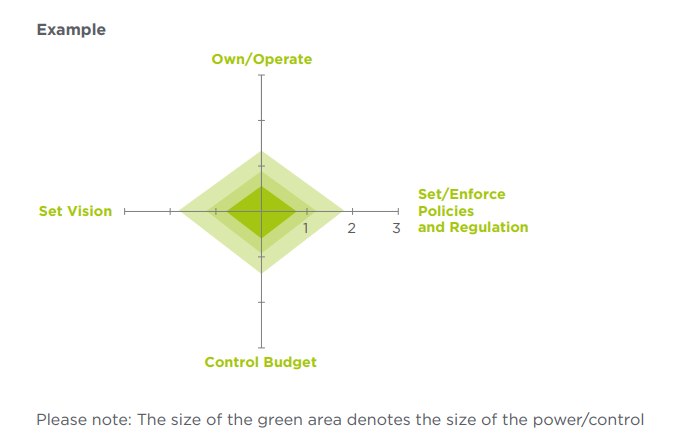 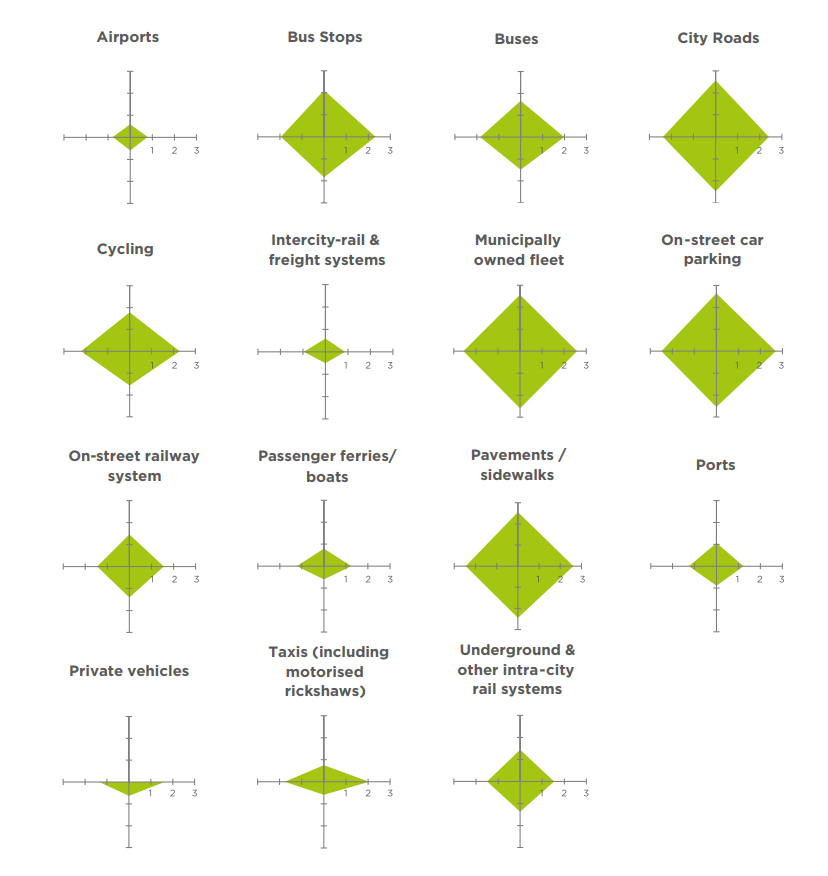 We often meet founders who want to access sidewalk infrastructure like light posts or bus shelters. It’s clear that city government has significant power over these assets. What’s less clear is how city government will respond to different sidewalk activities. For example, if you ride a bike on a sidewalk, depending on where you are, you’re likely breaking a local law. But what if you use an electric wheelchair or an electric board or robots?

“Our streets and our sidewalks are made for people, not robots,” said Supervisor Yee in an interview with Recode. “This is consistent with how we operate in the city, where we don’t allow bikes or skateboards on sidewalks.” Interestingly, Supervisor Yee also mentioned a concern about jobs. And just like that, sidewalk use is no longer about safety, but about jobs.

City governments have significant power over sidewalks and they also control roads. So they certainly have the power to build out bike infrastructure like bike lanes and bike parking. What happens when cities also start to hire bikeshare operators?

The current bikeshare model presumes that you need space on the sidewalk and road for the docking systems used to manage bikeshare. But a new generation of bikeshare can be deployed without the need for any docking startups. That is, they need the same amount of space as a privately owned bike.

Can cities limit competition with their own bikeshare systems? This is going to lead to a complex debate, so it’s no wonder that one of the dockless bikeshare teams, is working with Molly Turner, who has helped AirBnB understand and work with city governments.

Founders are used to dealing with customers with relatively simple expectations related to faster, better or cheaper. City governments frequently respond to a more complex mix of motivations. In the case of C40, city governments are working to achieving climate goals like reduced greenhouse gas emissions. There is no longer much doubt about how this serves the public interest and more and more citizens are simply voting for mayors that will act on climate.

But the sidewalk discussion in San Francisco hints at a more common motivation. Certainly public safety is a concern, but almost always, top of mayor’s agenda is economic development or jobs.  In fact, if you follow the arc of AirBnB’s interactions with city governments, their latest iteration is focused on jobs. Jobs also complicate roles for Uber and Lyft, who have very publicly indicated their focus on autonomous vehicles. They’ll lose their claims to generate economic opportunity.

As teams scale, they’ll attract interest from regulators and policymakers, perhaps at the urging of an incumbent. But early on, teams are unlikely to attract much attention. That’s just as well since it’s hard to enough just to build something customers want.