There’s been much speculation around the new project from Andy Rubin, the man responsible for developing Android, and now we have the answer. Well, part of the answer, at least.

Essential, Rubin’s new company, unveiled its first smartphone alongside an Amazon Echo-like device and a new operating system called “Ambient”. The three were revealed online, but all that Essential is providing at this point is renders and graphics so we’ll have to wait on the final verdict.

The phone is the most anticipated item here, and the firm has teased its unveiling over the past month.

The first thing to notice from the renders — again, these are company supplied graphics not independent product shots — is the impressive edge-to-edge screen and tiny bezel. The design is really quite striking. The screen starts at the top of the 5.6-inch device, leaving a small space for the front camera, rolling down to the bottom with just a tiny gap.

The screen is a blend of titanium and ceramic which, Essential asserts, makes it stronger than those offered by Apple and Samsung.

The device will ship with a Qualcomm 835 processor, 4GB of RAM and 128GB of on-device storage, according to the Essential website. The front-facing camera has an eight megapixel sensor and is capable of recording 4K video, while the rear camera is 13-megapixel with a second monochrome sensor to help boost low-light shots. That’s a departure from a secondary lens for bokeh-style images as Apple has done with the iPhone 7 Plus.

In addition, as previously hinted at, the device will include a 360 degree camera that can be clipped on the device to enable a whole different kind of phone-based photography. Oh, and there’s no headphone jack but the device will ship with a dongle.

On the software-side, Essential hasn’t released details yet so we can only speculate that, in line with the device’s simple yet powerful approach, it’ll be a minimalist affair that doesn’t force bloatware on its users.

The $699 price tag, however, is official, and it could make the device a very interesting option. Although carrier distribution is a key make-or-break fact for hitting serious volume with U.S. released smartphones, the Essential Phone is sure to provoke curiosity among smartphone purists. There’s no word on availability, but the U.S. will be the first market for sales.

From renders on the company’s website, it is a smart assistant/interface for controlling things like music, smart thermostats, smart lights, answer questions, etc. Beyond a large circular screen and standard features like voice activation, the exact details remain unclear. 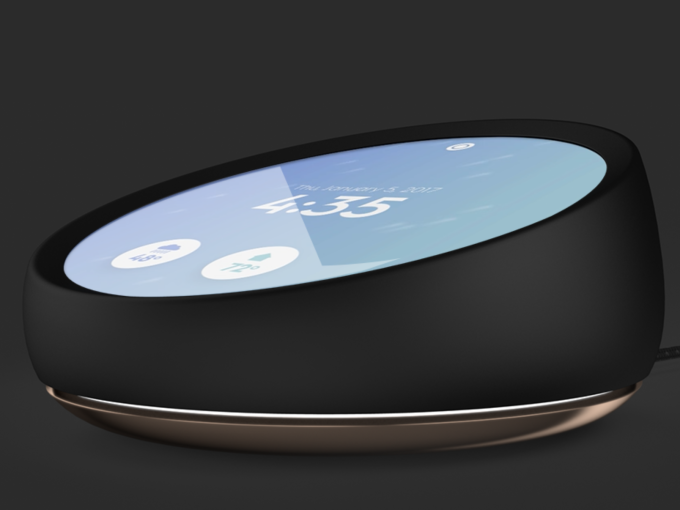 One interesting twist is that Essential Home will avoid using the cloud for funneling and storing data where possible. That’s a deliberate attempt to handle privacy issues that smart home assistants like Amazon Alexa and Google Home have thrown up. Instead, data and services will be managed locally unless absolutely necessary. That pitch is enough to color us intrigued to learn more.

“The home is your own space where you should be able to say what you want, without having to worry about your privacy,” Essential writes on its website.

The company also offers up information about Ambient, the OS behind the Home product too:

Ambient OS provides a set of services and abstractions that enable the development and execution of applications that run in the context of your home. With Ambient OS, your home is the computer. Ambient OS is aware of the physical layout of your home, the people that live in it, services relevant to both your home and the people within, and devices.

Key to Ambient OS is the belief that people should always be in control. To this end, it does not try to make your home smart by anticipating what you need. Instead, as it learns from people, it can suggest certain behaviors but in the end people decide whether or not use them.

No doubt there’s plenty more to come, not just from the Essential Home and Essential Home, but from Rubin himself. His newest venture, parent to Essential, is Playground and that’s an incubator design to work on multiple hardware projects beyond just smartphones and assistants. Having been the driving force behind Android, the world’s most popular operating system with over two billion devices, Rubin is spreading himself wider in a bid to top that achievement.