Facebook’s leverage over news publishers can be worrisome, but today it’s putting its muscle to good use. The social network is bringing its battle against clickbait abroad, getting more precise about which link headlines it downranks in News Feed, and starting to demote individual posts instead of just web domains and Facebook Pages.

The updates are part of a News Feed algorithm change Facebookis rolling out today that builds on a push it started in 2014 and deepened last year in English against headlines that withhold or exaggerate information.

The changes could reduce News Feed reach and referral traffic to clickbait publishers, ranging from “You’ll never believe…” viral crap blogs to purposeful scammers and spammers. It could also help Facebook decrease the prevalence of “false news” that has become a major concern since Trump’s election.

“Publishers that rely on clickbait headlines should expect their distribution to decrease. Pages should avoid headlines that withhold information required to understand the content of the article and headlines that exaggerate the article to create misleading expectations. If a Page stops posting clickbait and sensational headlines, their posts will stop being impacted by this change.”

Now Facebook can detect and downrank clickbait headlines in German, Arabic, Spanish, French, Portuguese, Italian, Thai, Vietnamese, and Chinese as well as English. Facebook News Feed product manager Greg Marra tells me Facebook selected these languages because they’re “commonly spoken ones that many people use in the world, We wanted to pick languages that would help many people, and where clickbait was a particular problem.”

Facebook will start levying News Feed visibility decreases against individual posts that it qualifies as clickbait, rather than just counting violations against the overall reach of a Facebook Page or links to a certain domain. 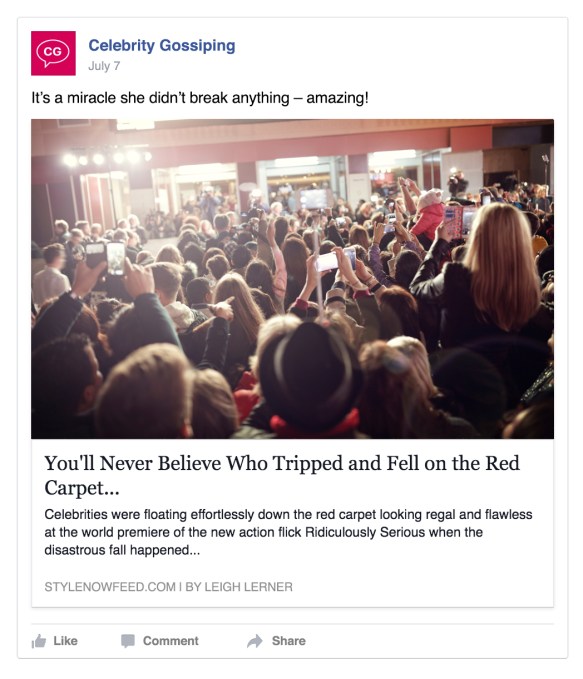 Finally, Facebook is splitting its previous artificial intelligence clickbait classifier into two parts: one that looks for headlines that exaggerate their article’s content, and one that withholds this information.

To build these, Facebook first had a team of humans analyze hundreds of thousands of posts in 10 total languages and identify which words and phrases were used most in clickbait headlines. It then used this dataset to train the two AI classifiers, which can now autonomously scan the millions of links shared to Facebook each day and demote the clickbaity ones in the News Feed.

One concern is that satire and headlines that parody well-worn clickbait cliches might get caught up in this trawl. When asked about this, Marra said that “People prefer headlines that are written in a more straightforward fashion”, signalling that jokes that dope people into clicking might get dinged.

Facebook has been aggressively rolling out algorithm changes to the News Feed in the last few months, likely hoping to shirk the image that it’s an enabler of false news. It’s made it easier to report misleading or false content, demoted fake and sensational posts, and reduced referral traffic to crappy ad-filled sites. It’s also published its report on state-sponsored disinformation and how its fighting it, put false news-spotting tips atop the News Feed and in newspapers, begun working with outside fact checkers to add warning labels to suspicious posts, and hired former New York Times VP of Product Alex Hardiman to run Facebook’s news products.

Today’s update is important because when people get burned by clickbait headlines on Facebook, they may become less likely to visit the News Feed or click the links they see there. That could decrease both the ad clicks and legitimate referral traffic that give Facebook its power.

In this way, Facebook’s ubiquity, scale, and influence may allow it to single-handedly help cleanse the Internet of one of its most prevalent scourges. While that centralized authority can allow it to squash startups, upend journalistic business models, and sway privacy norms in unsettling ways, at least here it could have a positive impact.