Delivery robots are seen as novelties, job-killers and a gimmicky way for restaurants to reach nearby customers. The newest entrant in this logistics segment is a Swiss startup called Teleretail AG. The company has put a twist on the personal delivery device—its machines, still in prototype, were designed to cover long distances, up to 50 miles, and to serve rural and suburban markets along with city residents.

Like its peers and competitors, including Starship Technologies or Marble for example, Teleretail employs some of the same systems developed for self-driving cars, including sensors, computer vision systems and GPS-aided navigational systems. The startup has obtained some of the components and equipment it used to build its prototypes from sponsors like Bosch, Nvidia, and lidar-makers SICK. Wherever it tests the robots, you can see their stickers adorned to the machines.

Teleretail CEO Thorsten Scholl said the company has been financed, in part, by grants including $2 million in available funds from the European Space Agency. But so far it hasn’t raised any seed or venture capital. The space agency, he said, was interested in the way the company is using satellite data to help ground-based systems navigate around to pick up or deliver items from retailers and residents.

To generate revenue, Scholl said, “We think of ourselves as a consumer app that applies [robotics] to local logistics. We could envision a subscription-based model where a consumer can subscribe to the delivery service, or a store could subscribe to it in order to make deliveries that its employees cannot make in person.”

Teleretail’s main objectives are to empower Main Street shops and small businesses to be able to compete with deeper pocketed e-commerce giants, like Amazon, when it comes to convenience. “We also have a great drive to help seniors live well, independently, as they age,” he said. “This kind of technology helps them send their own kind of Mars rover out to drop off the dry cleaning or pick up groceries.” 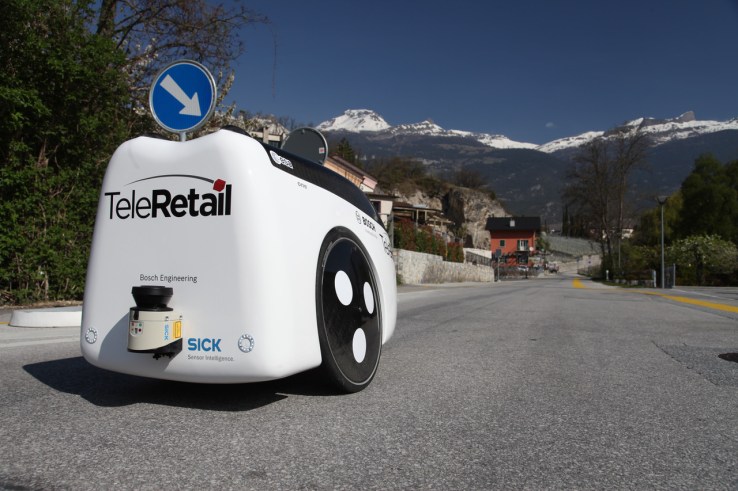 Recently, the company demonstrated its technology at the AUVSI Xponential conference in Dallas, which features all manner of autonomous vehicles and drones. Next, Teleretail intends to get its robots working with early pilot customers and partners in municipalities throughout Switzerland and the US that are early to authorize the testing and commercial use of personal delivery devices.

Scholl said, “Washington D.C., Sunnyvale in California, and as of July, Idaho are allowing this. And so are some Swiss mountain villages. We’re exploring other possibilities and trying to help regulators figure out what to do about this, as well.”

Eventually, the CEO believes that the devices will be allowed to operate not just on city sidewalks and crosswalks, but in streets or possibly even on highways, as well. That’s one reason why Teleretail is developing their small vehicles to cover long distances in all-weather.

For now, users will have to come outside to retrieve a delivery from the Teleretail robots. But down the line, the CEO said, the company wants to develop a robot that can go indoors to make not just a last-mile delivery, but a last-meter delivery, somehow. Stair climbing, however, is still quite a challenge for even deep-pocketed robotics companies.