Google Maps has quietly rolled out a new feature that will make it easier for you to see where you need to go when using turn-by-turn navigation: integrated Street View images on the directions screen. While the app has always allowed you to see an overview of the upcoming turns and distance between them, the new feature introduces an option to tap to see the associated Street View imagery as well.

The change was first spotted by Android Police, who believed it rolled out more broadly over the past few days. We reached out to Google for further confirmation, and the company said the feature has been widely available since early in May, and is now offered to Android users worldwide.

The feature hasn’t yet made its way over to the iOS version of the Google Maps app, however, and Google could not confirm when it would reach that platform.

Users don’t have to do anything differently to see these images appear – you just enter your current location and destination as usual, then view the route. Where before you’d see only the list of turns, you’ll now notice that many will have a photo thumbnail next to them. Tap this thumbnail and you’ll be taken to a full-screen 360 degree Street View experience, which is oriented properly for the direction you’re going. 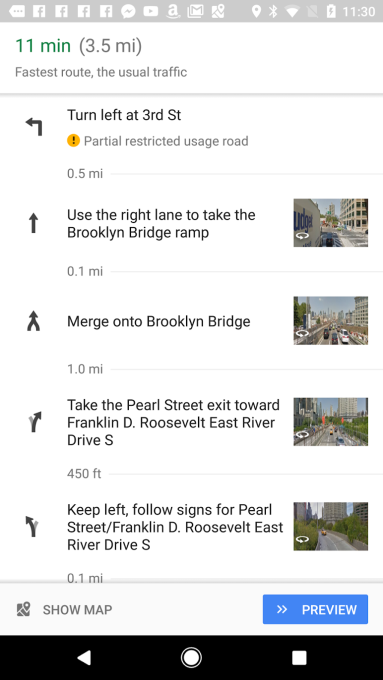 Here, you can pan the screen around by dragging your finger, just as you can in Street View itself. Your route will be indicated with a blue line, and you can tap to move further down the road if you choose, or you can exit back to the main directions screen.

The idea to integrate Street View with Maps is something Google has tried before. As Android Police pointed out, Google first introduced a similar feature on the web all the way back in 2008. Other users have noted that an option like this also shipped with the original Droid. It’s unclear why Google didn’t continue to include it in all versions of mobile Google Maps, however. Some users may have seen the changes to Street View before others, as the feature appears to have been a remotely activated rollout.

Google Maps is a free download on the Google Play Store.