Signal Sciences, a venture-backed startup that wants to help companies secure their web apps in a modern DevOps context, announced a $15 million round today led by CRV with participation from Harrison Metal, Index Ventures and OATV.

The company founders started at Etsy, which helped pioneer the DevOps idea, and while they were there, they found that securing a product that was changing constantly — sometimes hundreds of times per day — was a very different animal from securing one in which they had several months between updates.

Signal Sciences aims to help companies working in this modern development environment maintain security even when there is a constant stream of updates. “The core technology we call the Web Protection Platform sits between customers’ Web apps, APIs, and websites and mobile apps and all traffic from outside,” Andrew Peterson, company founder and CEO explained. His company’s software aims to protect customers from attackers and misuse of those tools. In fact, the customer can configure the software to fix a problem automatically, then inform the right team members for further analysis. 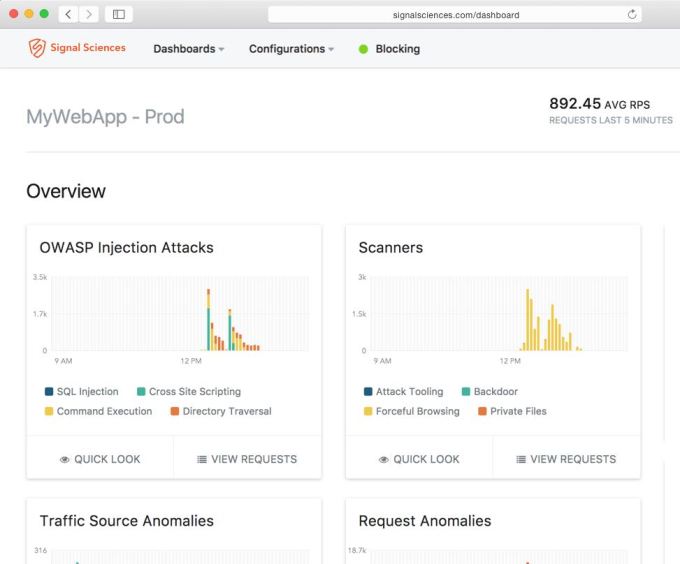 The founders learned at Etsy that speed was of the essence in the DevOps development world. “When we came in and built the security program [at Etsy], our guiding force was to build a security program, but one that needed to be in service of speed and control of delivery on the application delivery side of the house,” he said. When they left the company to form Signal Sciences they took this core lesson with them.

In a market with so many competing security startups, Signal Sciences is attempting to differentiate themselves by being security for the micro services domain where, instead of developing a monolithic application, companies are delivering containerized applications in small discrete pieces. In this world, developers worry about creating the application bits, while the operations team is responsible for delivering the stream of updates — hence the name DevOps.

Murat Bicer, who is a general partner at CRV, says he had been looking for a security company that was built to secure the DevOps approach, and when he met the team at Signal Sciences it was a very quick decision to write the check. “I have been fortunate enough from very early days to be working with companies central in the DevOps movement like Chef and DataDog. Watching this change over the last 7 or 8 years or so, I understood the magnitude of this change, and how important it was to build a security solution [specifically for DevOps], not a bolt-on, but built from the ground up,” Bicer said.

The company, which was founded in 2014, launched the product last year. It has 50 employees and over 60 customers including Yelp, WeWork, Etsy and Grubhub.