Until now, Pepper the robot has required programming knowledge to control, a fact that’s proven a pain point toward wider adoption (well, that and the fact that it hasn’t started shipping widely here in the U.S.). This morning, the company debuted Promoter, a browser-based solution that lets anyone customize the robot’s movements — albeit within a fairly limited scope.

The Promoter application, which the company promises will be the first of several solutions to come, is essentially a mix of choosing between responses and filling out text forms in order to provide a relatively differentiated experience when the robot interacts with customers, grabbing their attention out in front of a store and attempting to convince them to surrender important contact and other marketable information on its tablet.

The company says using the app requires “a Facebook level of user,” which I can confirm, having walked through a demo. Of course, that limits the level of sophisticated actions the robot can perform as a response. It’s more like choosing canned responses to various inputs. Though it still has some interesting tricks, like tailoring responses based on the system’s attempts to determine age, gender and emotional responses based on visual data. 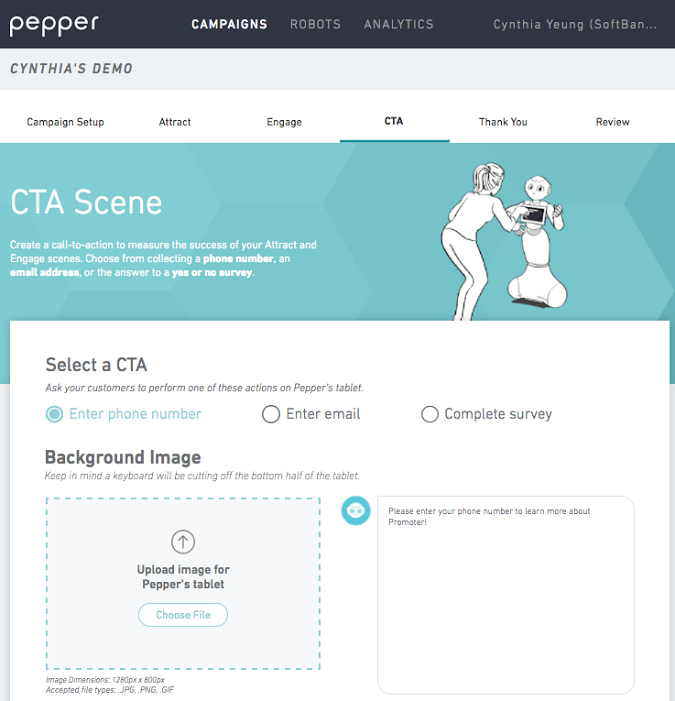 As far as out-of-the-box robotics programming solutions go, this is all pretty simple stuff. And while SoftBank has promised more to come from its team, the first solution out of the gate makes it pretty clear the key application the company expects its robot to fulfill: attracting customers with its novelty and pulling them into a place of business or getting information from them.

Given the high sophistication of the technology that has gone into creating Pepper, it’s kind of a shame we’re not seeing it used in more interesting settings than essentially serving as a store greeter. And with the robot’s starting cost of $25,000 for a retail package, that’s going to require a heck of a lot of email signups to justify the cost.

With Pepper’s predecessor Nao, the company demonstrated that it was capable of making an advanced research robot; ditto for the more advanced Romeo. When it introduced Pepper a half-dozen years later, it was clear that it had more populist aims. Instead of laboratories and robotics matches, the humanoid bot has gotten most of its face time greeting people in shopping malls and airports.

The company has promised future applications of this nature to help expand Pepper’s potential usability. SoftBank has been aggressive about opening up the robot to makers to showcase its potential function, but, thus far, the robot has been mostly limited to being a highly articulated mobile kiosk. Perhaps we’ll see more from Pepper before it launches here in the States in July.