For every bad idea, there’s a crowdsourcing campaign with a soapbox and a big-ass megaphone, ready to make it even worse.

Interested? In case you missed it, it’s not too late to vote to shake up the executive branch — surely the No.1 priority of every red-blooded American in these mostly ho-hum, sleepy times.

As the giant stack of paper behind Office of Management and Budget Director Mick Mulvaney is meant to express, the government is a mess, full of messy paper! Again, the Trump administration invokes paper to convey a sense of vast waste and establishment madness. Just look at it! Disgusting.

“President Trump calls it draining the swamp,” Mulvaney explains, enthusiastically lit by an otherworldly glow. “What it really means is making the government more accountable to you, more effective, and more efficient, and we can’t do that without your help.”

Got an idea for a new agency? Maybe a new agency tasked with getting rid of old agencies? Well, that’s too bad, you’ll have to write that in.

But don’t worry, if you’re gunning to shred the federal government into so much bureaucratic confetti, you’ve got options. Just select what you want to see go in a drop-down menu of cabinet agencies. You can even select-all! 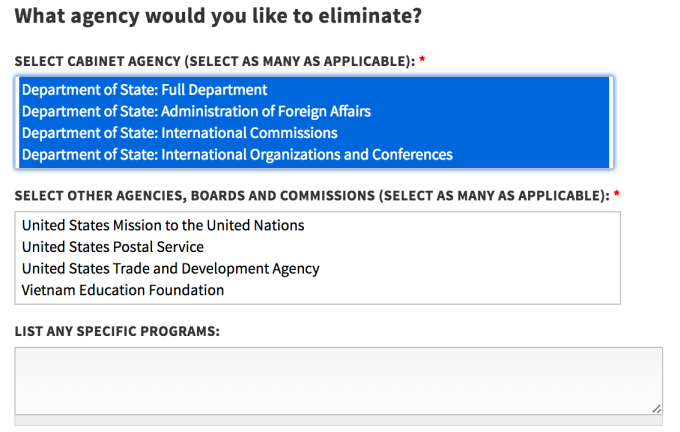 Remarkably, the drop-down even includes Trump administration faves like entire Department of Defense (sayonara Air Force!!), the Executive Office of the President (uh?) and the probably inconsequential State Department, reportedly already doing whatever it does with a skeleton crew. Appetite for annihilation not quite sated? An additional menu lets you select such hangers-on as the United States Postal Service and NASA.

Not suggesting that anybody does this, but I am amused this is an option https://t.co/KRnEG3EB5C pic.twitter.com/COSIK8Mr5t

What will become of these votes is anyone’s guess, but we can only hope it results in a reality TV-style event at which the full staff of the most hated agency drops through a trapdoor, never to be seen again. Really, that would only be a mild if grisly departure from the made-for-TV announcement of Neil Gorsuch.

Don’t forget to vote one agency out of the Beltway by June 12! You can even vote to eliminate the office that brought you the vote, which seems like it would either nullify the results altogether or create a rift in the federal space-time continuum through which more agencies could slip in undetected. May the odds be ever in your favor.