Now the parent company’s top Snapchat clone Instagram Stories has hit 200 million daily active users, surpassing the last count of 161 million that Snapchat announced alongside its IPO. Instagram Stories launched in August, hit 100 million dailies in October, and 150 million in January, so it’s hardly slowing as it grows. Meanwhile, Instagram is getting faster at copying even Snapchat’s most technologically advanced features with a series of global iOS and Android updates.

Exactly one year ago, Snapchat launched augmented reality “3D stickers” and text you can stick to objects in videos, which then stay stuck to them and grow or shrink as they move around. Today Instagram launches a clone of this feature called Pinning for stickers and text, with an added improvement of a video timeline for scrubbing back and forth for picking when to Pin something and demoing how it looks.

Snapchat launched these augmented reality stickers a year ago; Instagram added them today

Instagram tells me Pinning relies on “fairly standard region tracking technology,” and was built because “we see people frequently sharing their lives through videos, so we wanted to enable our stickers to move through videos as one more way to mix your personality with the moments you’re capturing.”

Instagram also now has its own version of Snapchat’s Scissors feature that launched in December for cutting out a part of an image, turning it into a sticker and pasting it on whatever you’d like. Instagram’s “Selfie Stickers” lets you open a camera from the Stickers dock, shoot a mini-selfie, add a fade or circle frame to it and then paste it into your images from then on. But you can’t just cut something out of your already shot content.

Instagram is adding Custom Geostickers drawn by local community members for Tokyo, Madrid, London and Chicago. It launched this copy of Snapchat’s illustrated geofilters last month in New York City and Jakarta. Just like Snapchat, your recently used stickers now show up at the top of the tray. And Instagram’s hands-free camera now includes a countdown to recording, so you know when to ham it up. 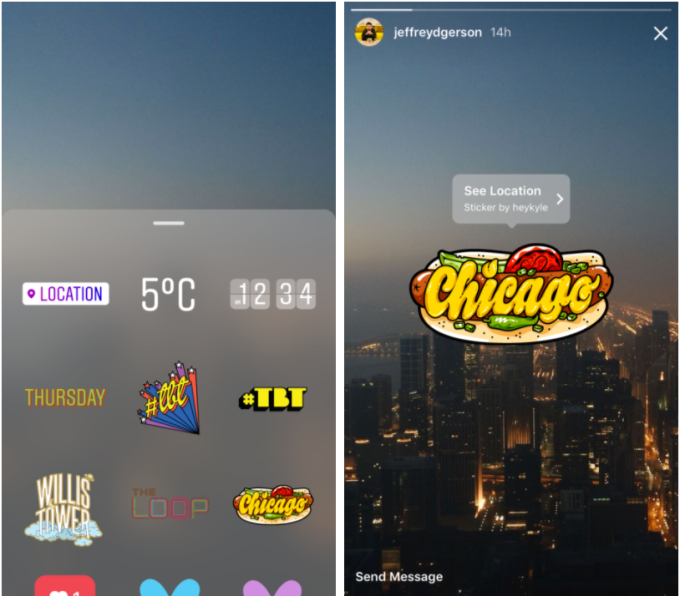 You can see that Instagram is getting faster and faster at cloning Snapchat’s features as we recap the timeline:

At this point the only major feature left for Instagram to copy is Snapchat’s animated selfie masks, which Facebook already has in its app and Messenger thanks to its acquisition of MSQRD. And with Instagram’s Stories reaching more users per day than Snapchat’s whole app, Instagram may be able to get preference from advertisers seeking maximum scale.

Snapchat’s growth sank 82 percent after Instagram Stories launched. Now all eyes will be on whether Snapchat can get user growth back on track when it has its first earnings call next month. Slow growth could make Wall Street fear it’s being left in the dust, while strong growth could show it will continue to battle Instagram for dominance of the new sharing medium.