Normally adding 200 million users in 8 months to a product that already has a billion would reduce the average engagement, but most apps don’t have Facebook Messenger’s network effect. Now with 1.2 billion monthly active users, “we increased engagement massively in terms of number of messages sent per active user. We had double-digit growth percentage-wise” Facebook’s head of Messenger David Marcus tells me.

Despite its bots not living up to the hype, Messenger had another banner year. It grew just a bit slower, since last time it got from 800 million to 1 billion users in just six months. Its daily US iOS App Annie download rank is up from a year ago, though a little down from a high point in June. But Marcus says the chat app is transcending being where people “find their Facebook friends they don’t have a phone number for.” For some it’s become “a primary communications channel.” 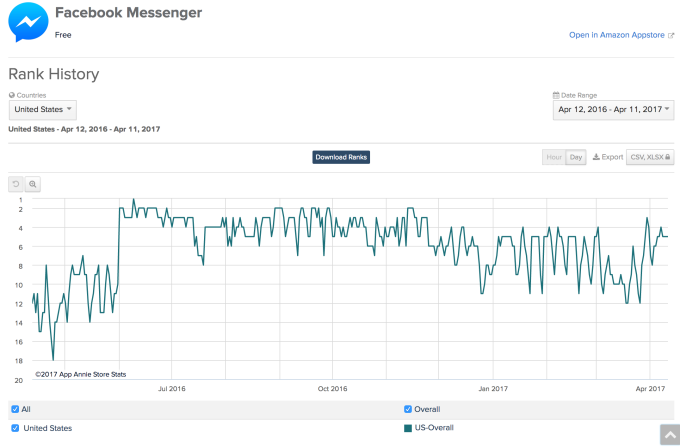 Messenger’s iOS download rank is up from a year ago, but down a bit from June. It’s been fluctuating between #4 and #12 recently

Now Messenger is working to become more than just the most popular SMS replacement in the Western world.

One approach is copying what’s working elsewhere. Marcus says the app’s Snapchat Stories clone Messenger Day is off to a good start. “Usage with teens is much higher” than some might have expected, “which is cool” Marcus says. “We’ve built a product that teens use on Messenger!” It’s very distributed. It’s going reasonably well. The participation rate is very good compared to our best Stories product” he notes, alluding to Instagram Stories.

Messenger Day has a big opportunity since its host app has twice as many people on it as 600 million-user Instagram. Yet at least amongst writers at TechCrunch, Messenger Day hasn’t quite taken off. Maybe we’re just old. 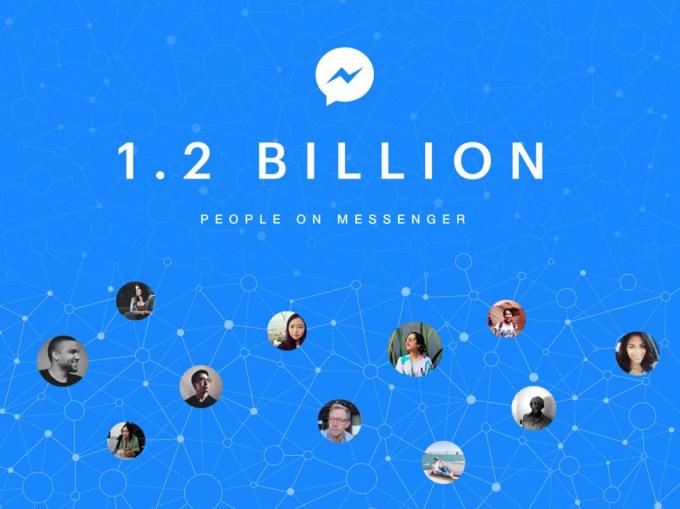 Meanwhile, Messenger is branching out beyond traditional person-to-person communication. Games have given people something to do while waiting for message replies, or a reason to start a conversation with a high score challenge. And now its opening up its artificial intelligence assistant M to provide users with suggestions of Messenger utility features they could use like location sharing, payments, stickers, reminders, and ride hailing.

Now the question is how Messenger can make money via ads, not taking a cut of payments, without interrupting the experience. Marcus says structural changes to the app coming at F8 should provide it with new opportunities in this realm. It’s tested sponsored messages from companies you’ve already talked to, and a carousel of ads in the inbox. And it’s driving revenue back on Facebook with News Feed ads that start a Messenger conversation with a product sales rep or bot when clicked.

Yet even if Messenger doesn’t start churning out cash, it’s contributing massively to Facebook’s success by locking people into its ecosystem. At a time when chat has emerged as the center of the mobile universe, and Facebook’s biggest competitor Snapchat is rooted in private communication, Messenger has fortified the blue app kingdom.