A few weeks ago, Avegant showed off an early look at some of the crazy tech it has been working on that — in its most simple terms — seeks to make head-mounted displays function more like human eyes. It’s an ambitious goal with more than a few interested parties. Many top tech execs and investors have high expectations for smart glasses to usher in the next computing platform wave, but in order to do that there are some major, non-trivial advances in near-eye display tech that will need to happen.

One of the most-hyped and least-seen technologies that will allegedly solve many of these problems is “light field technology,” which Avegant is using this bulky feature prototype to showcase.

TechCrunch had the opportunity to bring cameras in and capture early demos of the prototype headset while also getting the chance to chat with Avegant CTO Edward Tang, who was available to offer a little clarity as to what “light field displays” actually are. I expected the standard fare, a half-hour session with a few questions, but it was only over the course of the next few hours, stashed in a demo room in Avegant’s offices berating the CTO with questions, that I was able to fully appreciate what I was seeing. 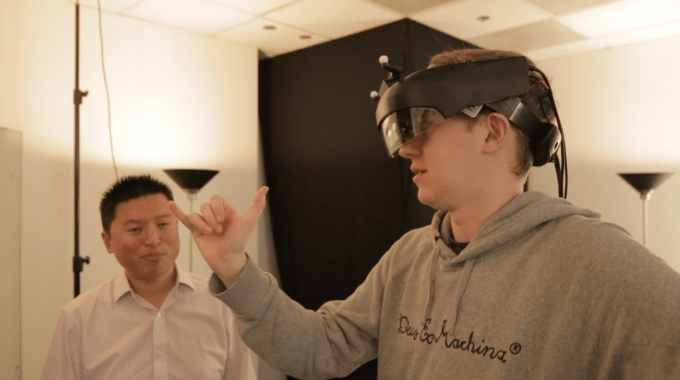 Most “magical” technologies inspire instantaneous incredulity, but the thing about light fields is that you pretty much have to be a display expert to immediately be shocked by it, and that’s because they are designed to feel so natural. Your eyes naturally shift between objects and your focus changes accordingly, just like normal.

Check out a bit of the experience in the video below. It’s admittedly a struggle to present the complexity of a new display type through watching a video on the conventional display it will one day replace, but alas.

In an industry filled with buzzwords, it’s hard to find someone who can easily pin down what a “light field” is.

You really have to change how you think of displays. When you’re looking at a television screen, the entire display is a point of focus. You couldn’t glance at, say, a character onscreen and cause the rest of the environment to move out of focus because they’re all on different focal planes. In the same vein, if you ordered up a fancy 3D TV you could see some objects seemingly moving closer to you but you wouldn’t be able to interact closely with what’s in front of you. This is due to the way our eyes converge on points of focus; within a meter or so you can’t use stereoscopic video feeds to show objects because it looks awful and screws up your vision. With this technology you can not only see an object floating in front of your nose but you can cast it out of focus simply by looking at something else in the light field space.

Avegant’s take on a “light field” display shows your eyes a 3D representation of an image based on stacking multiple focal planes. It’s a far from finished prototype, but it’s entirely unique and the first consumer-minded “light field” type display that many in the tech press have been exposed to. Things like field-of-view and environment mapping are still problems that need to be tackled.

The headset isn’t the HoloLens-killer that some have billed it as, but it’s more accurately an early glimpse at a display technology that will more seamlessly combine digital holograms with the rest of the physical world. The crazy thing is Avegant has been able to create this technology while having raised just under $37 million in funding, making due on far less than AR companies like Magic Leap, which has raised more than $1.4 billion from Google and Alibaba.

Though the company has a consumer product, a headphone-like home theater headset called the Glyph, most of the engineering team has now shifted attention to the technology behind light fields. Avegant showed me a cosmetic model of what this could eventually look like, but they weren’t all that forthcoming on whether they would actually build headsets utilizing light field displays. With so many pieces of the mixed reality puzzle left to craft, their options are to either seek a hell of a lot more money or pursue an acquisition from a company with interest in the space and the deep pockets to push the tech forward, someone like Microsoft.

While it’s unclear what the time tables look like for light field tech, the space is about to get a whole lot more exciting as tech titans continue to pour money into the cause of beaming the future into your eyeballs.