Pretty much everything you’ve already read about the Samsung Galaxy S8 is true. And that’s a good thing. Whether by accident or design, the company did a truly abysmal job keeping its new flagship under wraps in the month or so following its likely intended unveiling at Mobile World Congress last month. The two models (S8 and S8+), the edge-to-edge display, the ditching of the physical home button — that’s all here as a deluge of leaks have foreshadowed.

Heck, those crafty leakers even managed to peg down the April 21 release date and the button on the side devoted to the company’s new proprietary assistant, Bixby. Taken together and seen in person, it’s a really nice piece of hardware. And while it will take more than a single flagship to end all of Twitter’s hilarious explosion jokes every time Samsung’s name is brought up in casual conversation, the S8 points to a company that has certainly stumbled, but not lost its stride. 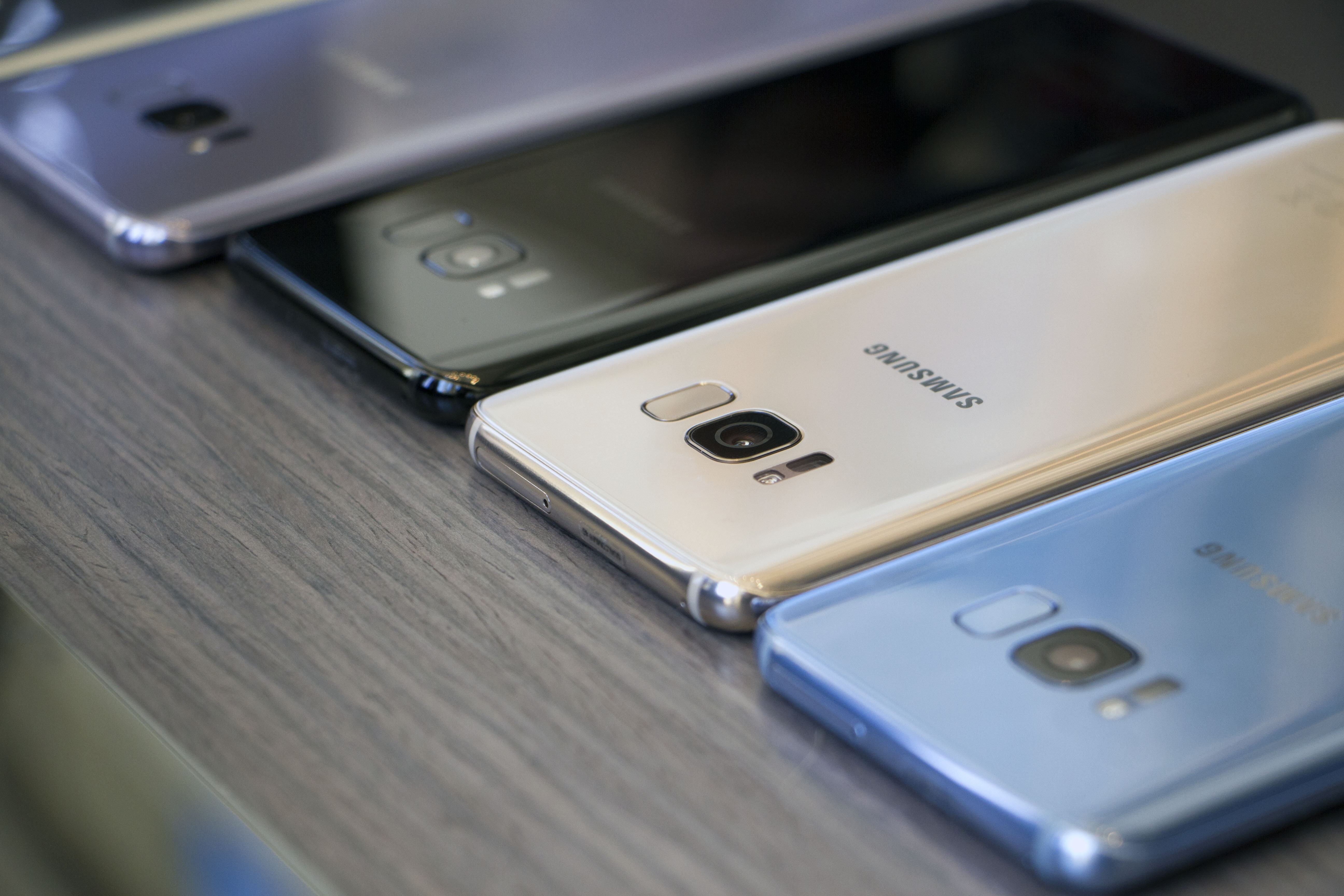 The defining characteristic is, as ever with Samsung’s products, the display. The company’s still pushing the boundaries of size with 5.8- and 6.2-inch screens on the S8 and S8+. The resolution is (as leaks suggested) 2,960 x 1,440 — an odd bump up from the S7’s 2,560 x 1,440, owing to the company’s shift in aspect ratio. Samsung has followed LG’s lead and shifted to a much taller phone, which, along with the built-in HDR support is part of the company’s attempt to let content providers offer video truer to their initial intentions.

The taller phone also allows for users to have more content open at once, though unlike LG, Samsung isn’t putting too fine a point on that aspect of the handset. That’s due in no small part to the sheer amount that the company has jammed into the phone here.

The screen monopolizes around 80 percent of the phone’s front, by Samsung’s count. That means, among other things, that it’s managed to make a really large-screen phone that doesn’t feel big or bulky. Like the Note before it, it’s pretty impressive how much phone the company has managed to cram into a relatively thin piece of real estate that’s 1.5 millimeters slimmer than its predecessor. In fact, Samsung did away with the signature oval home button on the front of the device.

The S8 sports a virtual touch sensitive button on the bottom. And in the place of the biometric fingerprint reader, you can unlock the phone with either your retinas (a feature offered on the dearly departed Note 7) or by scanning the whole of your face. Interestingly, while the company dropped the big physical home button up front, it’s added a whole new button on the left side, just below the volume rocker, pointing to just how important of a feature it believes its new smart assistant Bixby will be both for the S8 and Samsung’s whole ecosystem of connected devices moving forward. 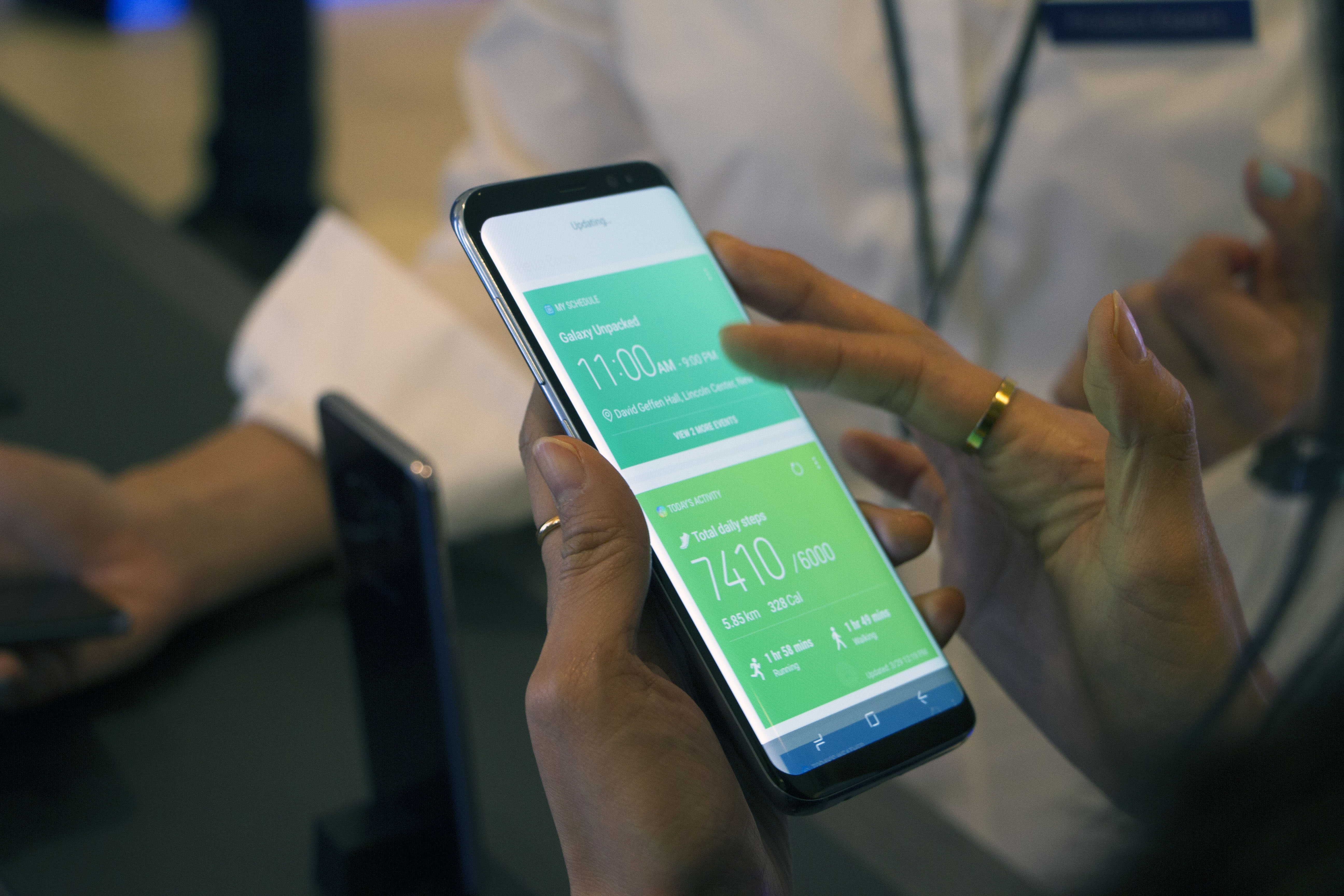 Bixby, Samsung is making it abundantly clear, is about more than just home assistance. Like Amazon before it, the company is hoping its new proprietary home assistant will be the start of something much larger. As such, there’s no limit to the number of ways users can access the assistant formally known as Viv on the phone, including the aforementioned button and a right-swipe from the phone’s screen.

Bixby wasn’t fully formed on the model we played with, which may go a ways toward explaining the delay in the phone’s announcement. Keep in mind, the company only finalized its acquisition of Viv back in October. I can’t speak personally to the completeness of the product, but it certainly seems ambitious, and it’s pretty clear why the company eschewed Google’s Assistant (and, for that matter, Alexa) in favor of its own home-baked solution.

Among other reasons, it’s clearly invested in building its own connected-home solution, and, unlike a majority of its competitors, Samsung’s got plenty of its own brand-named appliances to help build the smart-home automation process. Similar to Scenes created with Home Kit, users can tie together multiple automated moments to their comings and goings or the time of day — so, say, when you leave the house, the Samsung robot vacuum will fire up and the Samsung smart TV will turn off. 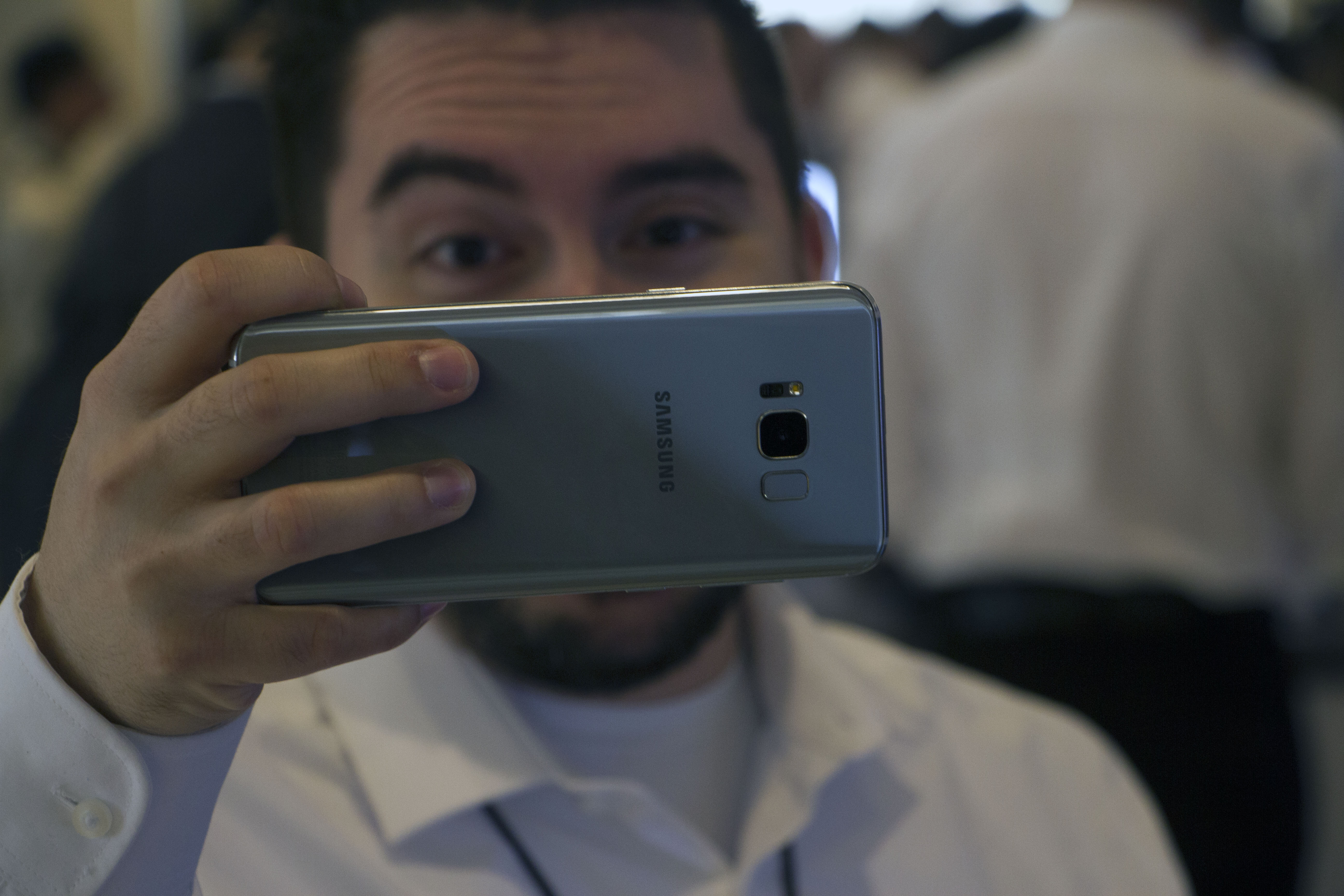 There’s a lot of promise on board that makes Bixby a compelling proposition, even in a world flooded with proprietary personal assistants. The company had added some interesting contextual information, so the assistant can get a better sense of what you want based on what else you’re doing in an app, for example. Samsung calls it “cognitive tolerance.” The company has also promised to open it up to all sorts of third-party compatibility with a goal of letting users do with their voice everything else they’re able to do in an app via touch.

The app also sports some compelling image and text recognition functionality. Through partnerships with retailers like Amazon, it’s able to pull up commerce links when you hold the camera up to a book cover or wine label. It also has text recognition with translation support for 52 languages. It’s still early days, and it feels like the company is more laying the groundwork stages for the assistant, but Bixby’s got the makings of an extremely ambitious addition to the Galaxy ecosystem. 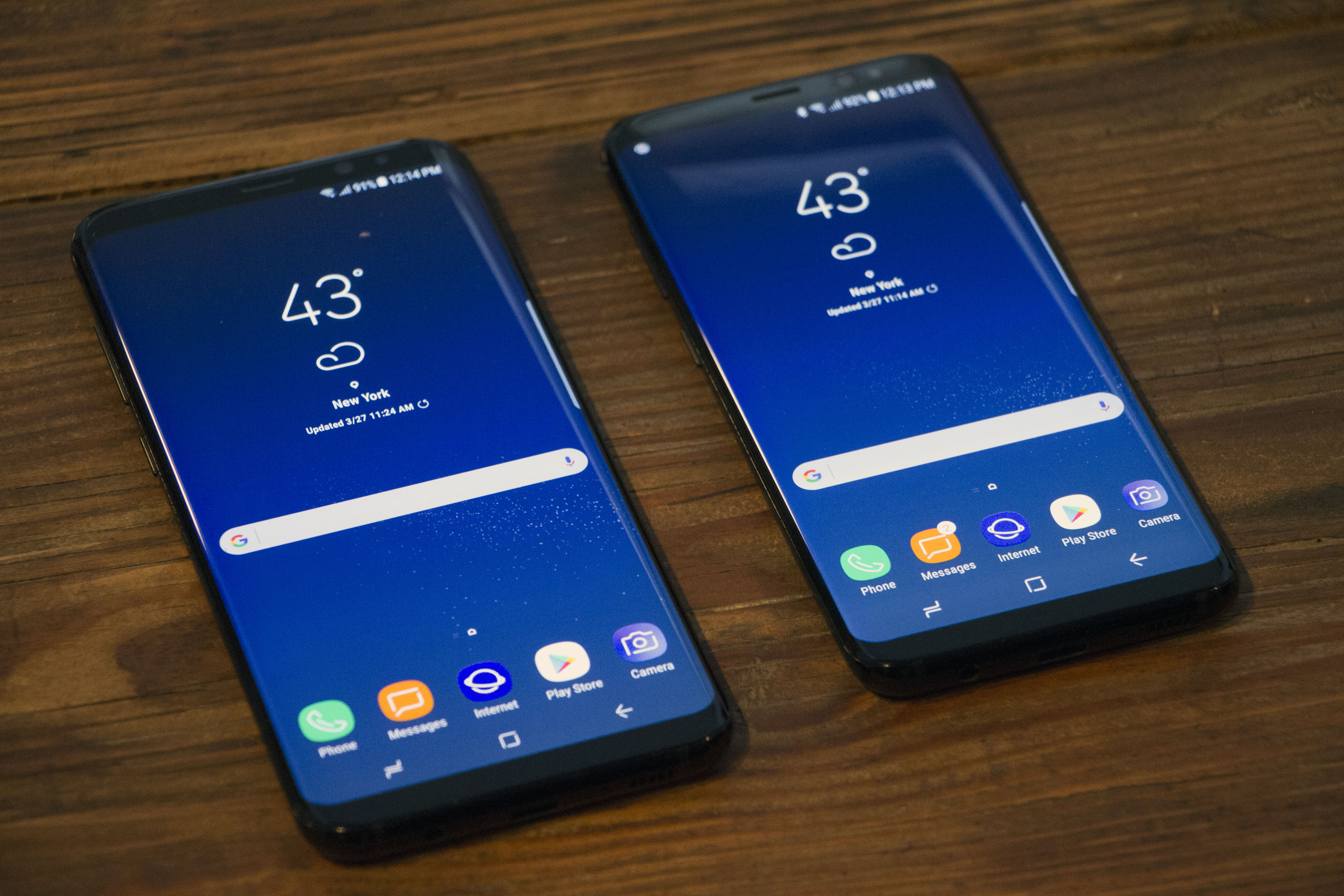 Also, as a nice bonus, the assistant works if you hold it up to your ear and talk to it like a real human person. It’s a silly little feature, perhaps, but one that could potentially lessen the awkwardness of learning to talk to your phone’s built-in AI.

Samsung has worked hard to push last year’s Note 7 kerfuffle to the background, mentioning the saga in each subsequent press conference, while slowly shifting the conversation from apologies to discussions of the company’s newfound extra safety precautions. It’s even offered up a flashy funk soundtracked ad detailing its sexy battery safety facilities. The incident is clearly more backdrop than defining characteristic for the new flagship, however. 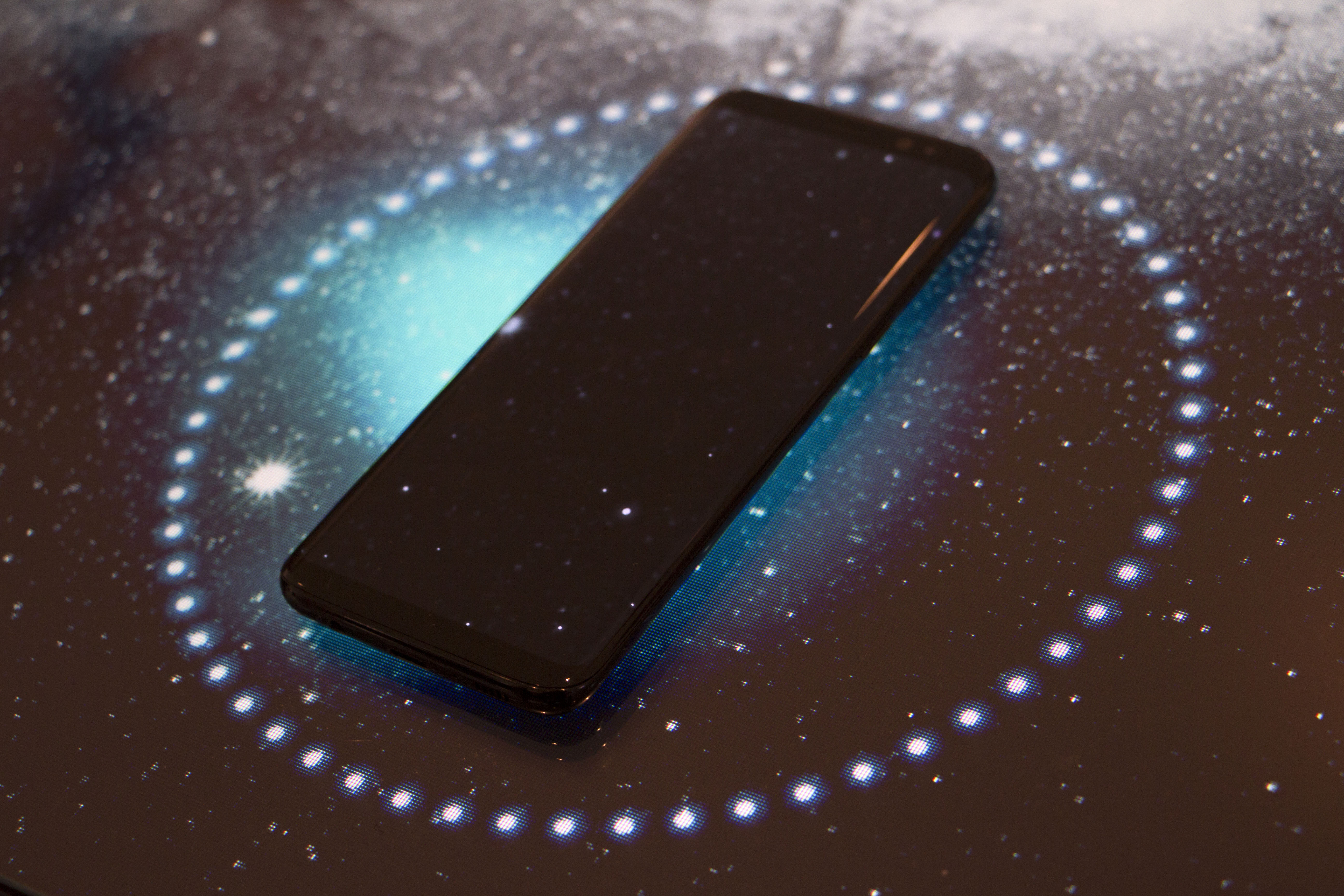 As the company put it in a presentation leading up to the event, “Some of the key learning takeaways are that as much as we innovate for products and services, we need to do that on safety as well.” Aside from an earlier peek behind the curtain, however, the company is content to keep all of the safety checks behind the curtain. Such concerns clearly weren’t a driving factor in the design process. From the looks of things, this was the S8 the company planned to release all along — albeit perhaps a little earlier.

One of the few places the company hasn’t pushed things is in battery capacity. At 3,000 mAh (3,500 on the 8+), it’s the same as the S7. Perhaps the company didn’t want to fly too close to the sun on that one, in spite of the “Reach Higher” slogan it was test driving back at CES. Though, let’s be honest, no one was going to push Samsung into testing the outer limits of battery capacity this time out. And hey, it’s got the added bonus of keeping the phone nice and thin.

Interestingly, Samsung seems to have given up the ghost on the rear-facing camera fight this time around. That one feature has been a primary battleground for most handset makers over the last few years. This time out, the company has mostly just tweaked the software, allowing for smarter autofocus and reduced blurring. The front-facing camera, on the other hand, has gotten a bit of a bump. Accordingly, one of the Bixby demos we got involved taking a selfie with the smart assistant. 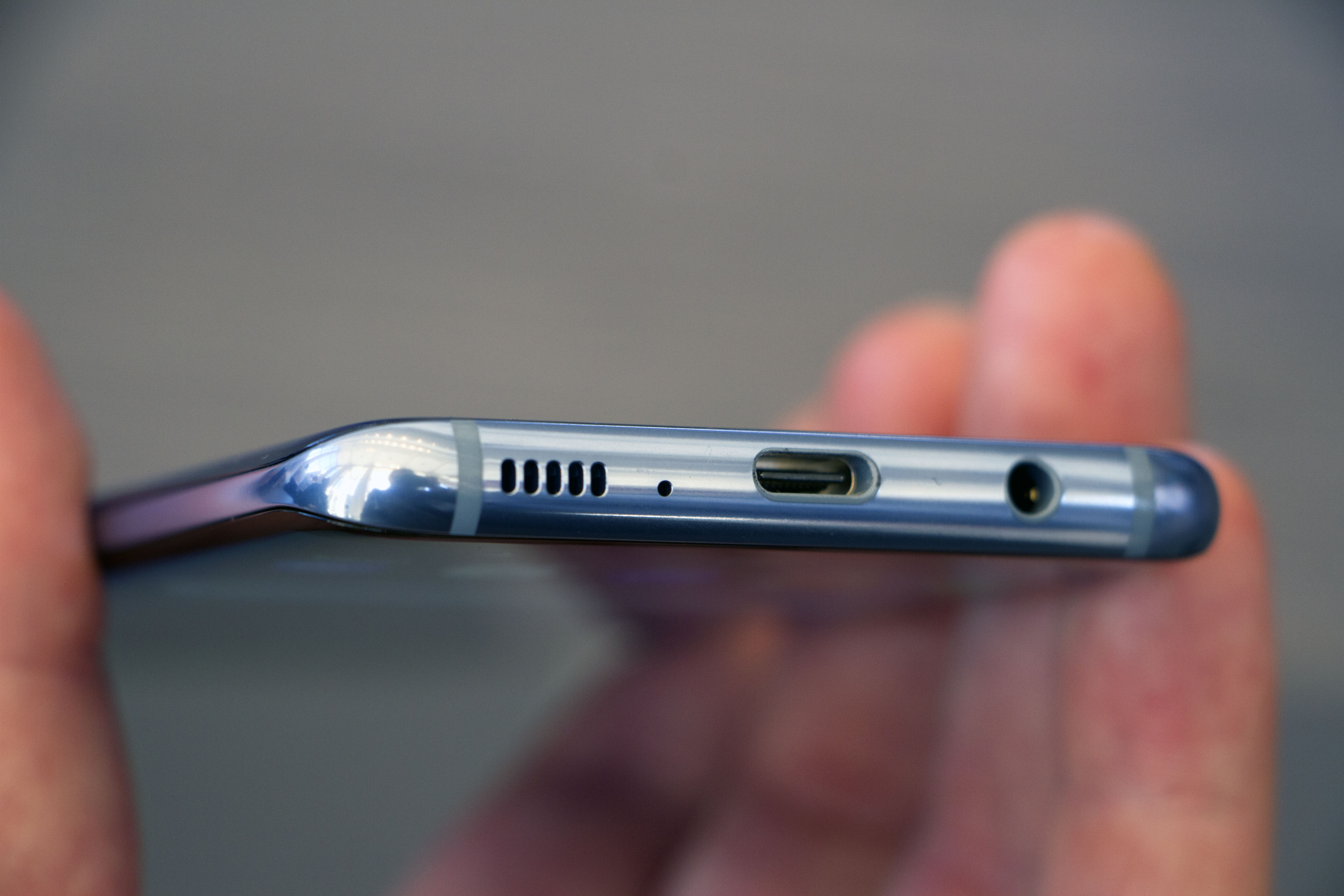 Samsung made it clear from its first major press conference post-Note 7 disaster that, while it was committing to future safety, the company wasn’t going to let past mistakes get in the way of moving forward. The company’s early claims admittedly felt a bit cocky when the company should have been atoning for its mistakes. But now that its first major handset since the disaster has arrived, it feels like the company hasn’t missed a beat. 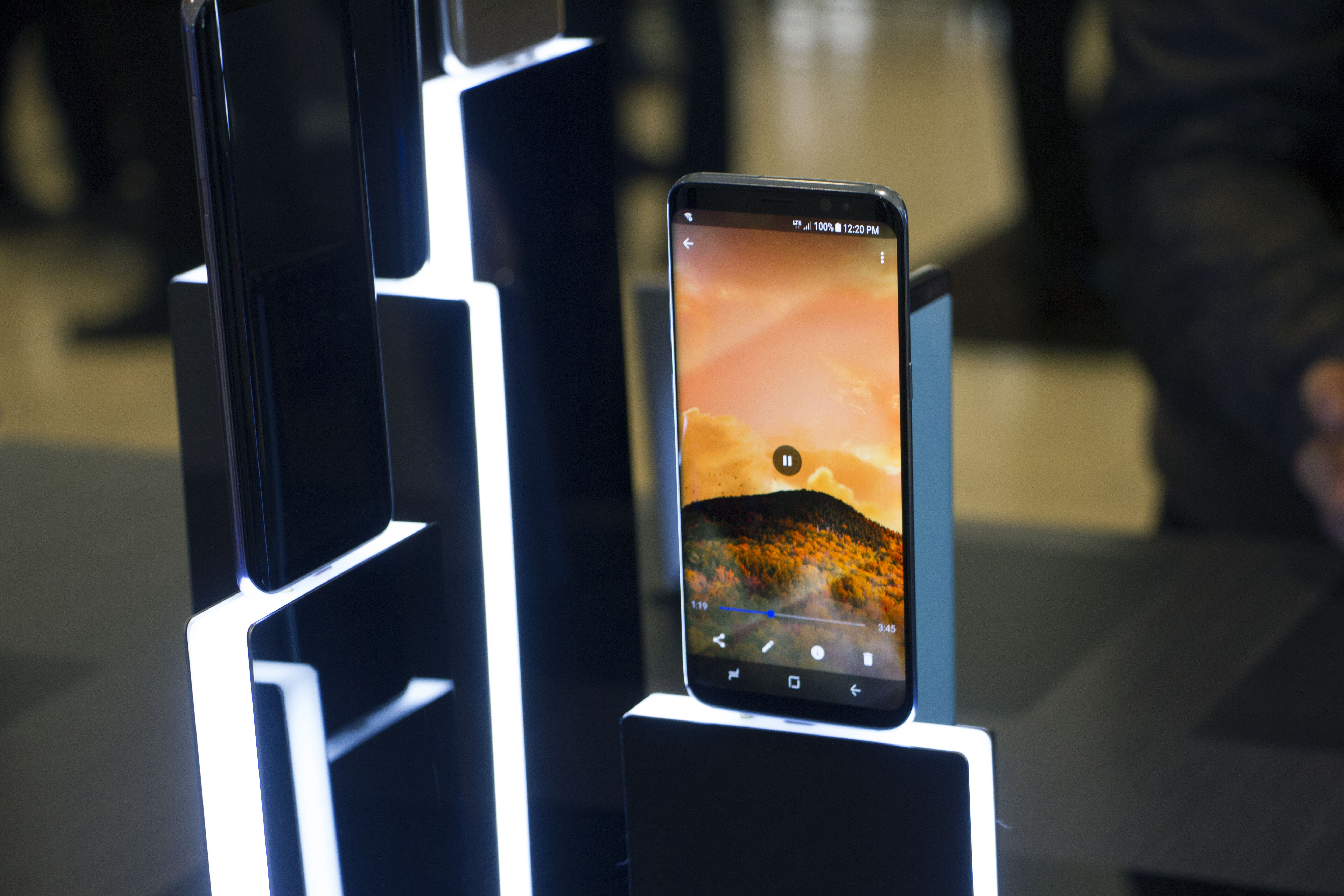 The S8 is ambitious, but not overly so. Its design is a logical evolution over previous generations, while its most compelling feature, Bixby, feels as much like a shiny new feature as a company laying the groundwork for what’s to come. And, just to make sure everyone’s on its side with this first big smartphone play since the Note 7, the company will be tossing in that new Gear VR headset/controller bundle for those who pre-order the phone. 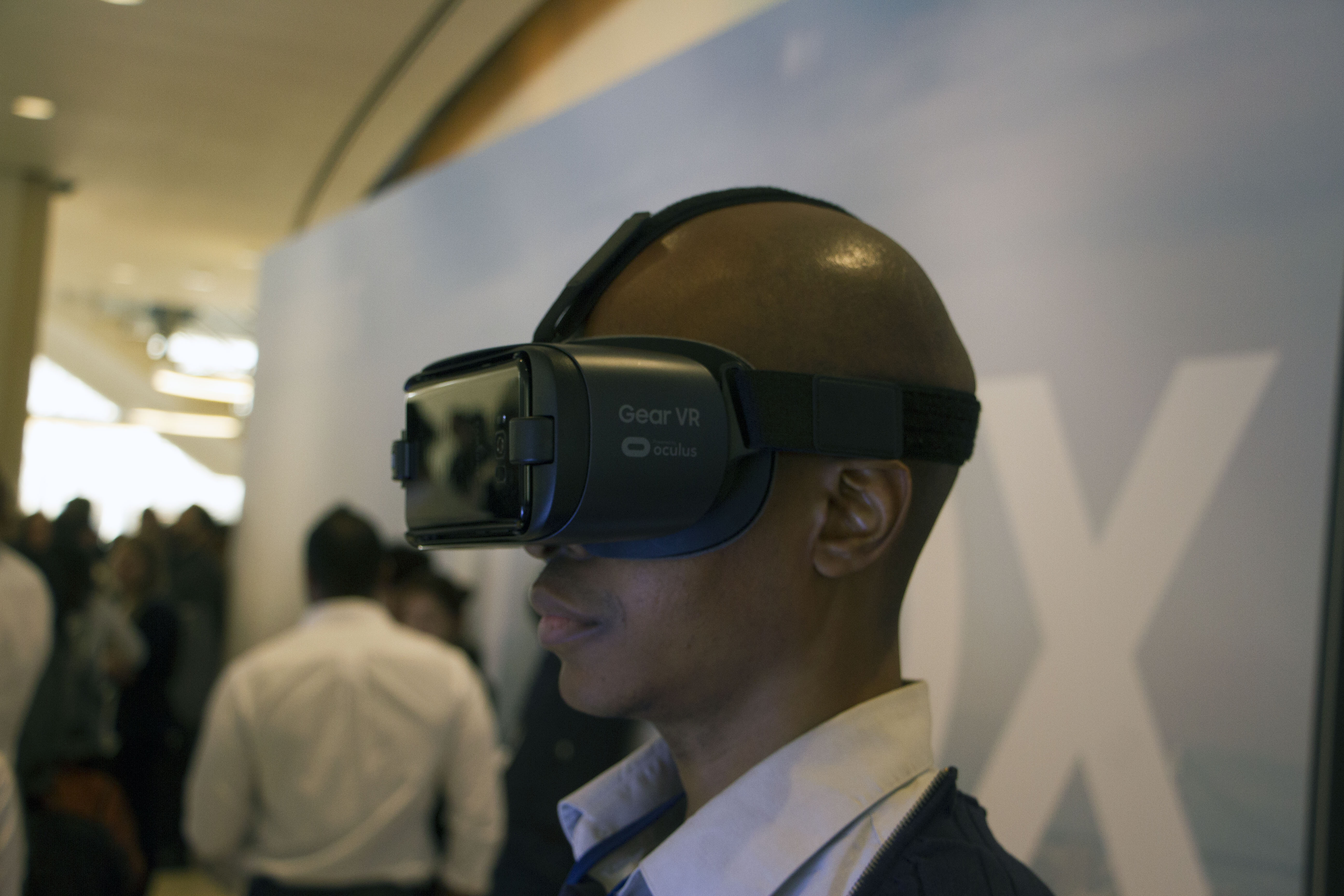 Oh, and the company’s also tossing in a pair of AKG-branded earbuds, a result of the company’s recent acquisition of Harman — and a commitment to maintaining the headphone jack, at least for now. A point the company not so subtly dropped during its last big phone unveil. After all, if there’s one thing Samsung needs to be this go round, it’s a people a pleaser.