Heavy with fake news guilt, Facebook is rolling out new social channel benchmarking for publishers in the CrowdTangle tool it acquired and made free last year.

CrowdTangle Intelligence lets news outlets compare their different accounts’ performance on up to five social accounts within any one social app, including Facebook, Instagram, Twitter and Reddit. Publishers can then see which accounts got the most likes, comments, shares, new followers or posts over different date ranges and content types. For example, BuzzFeed could see which of its Facebook accounts, like BuzzFeed News, Tasty and Nifty, got the most followers in a month.

The tool is designed to “help publishers understand overall trends and more easily analyze what content is working and what’s not.” Thanks to charts and graphs, CrowdTangle Intelligence simplifies doing high-level reports and discovering trends to inform their publishing strategy. 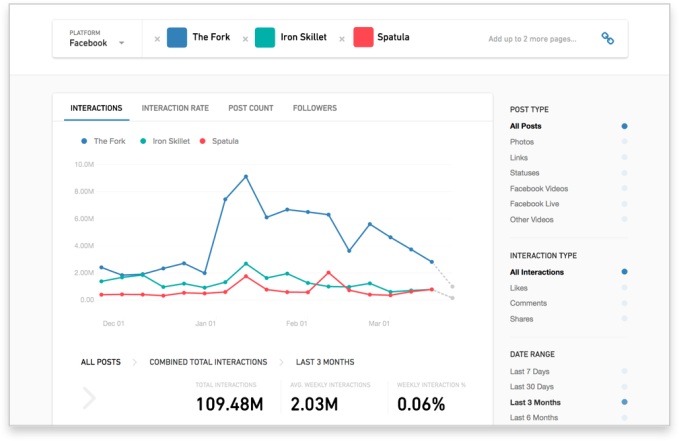 If Facebook can improve the quality of what publishers share on its social networks, it will reap the benefits of better engagement. Assisting them on other social channels just makes the tool more valuable. Meanwhile, Facebook is trying to do whatever it can to make up for the way it let fake news spread uninhibited during the election, and how it’s absorbed a ton of the ad spend that used to go directly to news publishers. That’s why Facebook launched its big Journalism Project.

While directly dealing with fake news and its overt power over journalism is complicated, the best Facebook can do is try to lend a hand to publishers and readers in other ways.