Following a series of beta trials, Microsoft officially announced this morning that it’s bringing its virtual assistant Cortana to the lock screen of Android devices. Initially, Microsoft had tested putting an overview of your day on the lock screen – offering information like the day’s weather, commute times, flight or meeting information, and more – where it could be seen at a glance.

The feature was designed to compete with Google’s own Assistant technology, which also offers similar information.

During the beta, users could head into the Cortana’s Setting menu to switch on lock screen integration. This would place a floating Cortana circle logo with “Swipe to Open” on the screen. If you swiped it, you’d be shown your personalized feed, schedule and the other information Cortana offered. 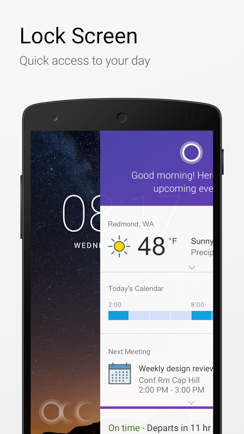 Today, you’re also able to interact with Cortana above the lock, the company says. That means you can ask questions to their virtual assistant, as you could with Siri or Google Assistant, for example, as well as perform various tasks like setting reminders.

This functionality could further challenge Google on its own platform. As Google’s only entry in the PC space is Chrome OS, it may be more useful for Windows users to add Cortana to their phones, given its interoperability across desktop, laptop, and mobile – including iOS and Android, not just Windows 10. 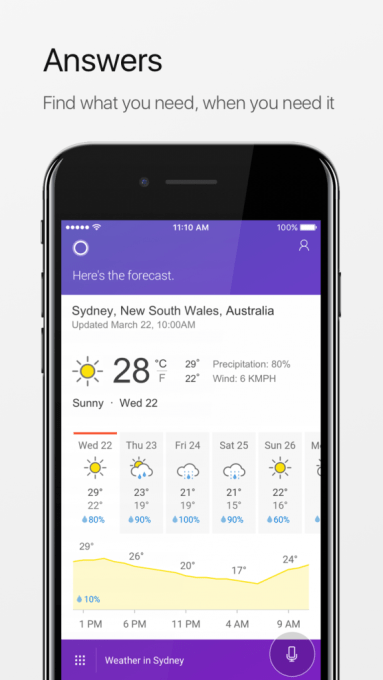 Microsoft says it has also improved the Cortana home on Android, making the information easier to read, along with other improvements like the ability to quickly add reminders and new calendar items, plus easier access to viewing, editing and adding items to lists.

Cortana in December rolled out an updated design on iOS and Android, Microsoft reminded users in today’s announcement. This upgrade had been focused on making it easier to get things done by putting the most important tasks more towards the center of the experience. The default experience is very purple, instead of the blue-and-black of the earlier Cortana look and feel. However, Microsoft added more color options in the weeks after the upgrade, including blue, green, and black.

In addition to its U.S. and U.K. availability, Cortana for iOS and Android is also launching in Australia today.